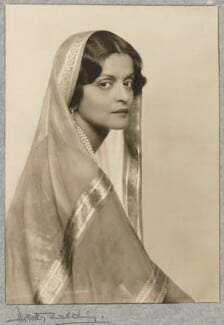 Themes of identity lie at the heart of our work. The Gallery's policy is to represent people of achievement in British history and culture. This policy has remained constant since our foundation in 1856, and we continually review how to fulfil it and how to respond to the changing nature of society.

To read more about the National Portrait Gallery’s commitment to diversity please see our Equality Policy and Collections Development Policy.

This audit of cultural diversity at the Gallery includes research, publications, online resources, exhibitions, displays and projects. Its aim is to highlight the Gallery’s work to date and make research into cultural diversity in our Collection accessible. In addition, our events programme has included a rich mix of activity exploring cultural identity and reflecting the rich diversity of Britain.

Cultural diversity in this context focuses on identity, race and representation. The Gallery seeks to engage and represent BAME (black, Asian and minority ethnic) communities to reflect the cultural diversity of Britain. BAME is the terminology used in the UK to describe people of non-white descent. The word ‘black’ refers to people with origins in Africa or the Caribbean. The word ‘Asian’ refers to all Asian countries and regions, not to Bangladesh, India and Pakistan only.

We have a continual commitment to acquire works for our Collection where there are key gaps, for example BAME sitters and artists. Recent additions include the largest acquisition of portraits of Afro-Caribbean sitters into our primary collection with the Black is the New Black series of 37 photographs by Simon Frederick and portraits of sitters including Sonia Boyce, John Akomfrah, Benjamin Zephaniah, Stormzy, Sheku Kanneh-Mason, Novelist and Prem, Jorja Smith, Adwoa Aboah, Chi Onwurah, Thelma Golden and Duro Olowu, Julie Adenuga, Skepta and Meghan, Duchess of Sussex.

Discover our most recent acquisitions

Portraits in the Collection that include representations of BAME (Black, Asian, minority ethnic) people are tagged with term Diversity. This search term is included in the Advanced Collection Search, under Search by Portrait > Subjects and Themes > Theme. Currently there are almost 3000 portraits, including those where the identity of the sitter is yet to be identified.

BAME sitters in the Collection (those whose identity is known) have been tagged in the group BAME sitters.* This search term is included in the Advanced Collection Search (under Search by Person > Group > Sitter grouping) where it can be combined with other filters.

BAME artists in the Collection are tagged in the group BAME artists.* This search term is included in the Advanced Collection Search (under Search by Person > Group > Artist grouping) where it can be combined with other filters.

The People, Portraits and Places page highlights the portraits, sitters, artists in the Collection that are linked to a specific country. Almost 200 countries are included.

* The BAME sitters and BAME artists lists are not comprehensive as the Gallery has not historically collected data on the ethnicity of sitters or artists and this information cannot always be established retrospectively.

Our newest AHRC Doctoral Collaborative Studentship will focus on the Gallery’s links to transatlantic slave trade. In particular, the project seeks to understand the impact of wealth derived from slavery on its founders, donors, and the sitters represented in its portraits, in order to be more transparent about the Gallery’s own history and the legacies of empire in British society today.

Central to our future plans is the the Gallery’s Inspiring People Redevelopment Project:

Inspiring Photographs: Collecting for the Future (2019-20)

In Dahomey, Photographs by Horace Ové (2005)

Off The Beaten Track: Three Centuries of Women Travellers (2004)

You Look Beautiful Like That: The Portrait Photographs of Seydou Keita and Malick Sidibé (2003)

Dawoud Bey (1998)
Dawoud Bey had a residency at the Gallery in 1998 and worked with high school and college students from three schools in London. He photographed Stuart Hall during the residency.

David Livingstone and the Victorian Encounter with Africa (1996)