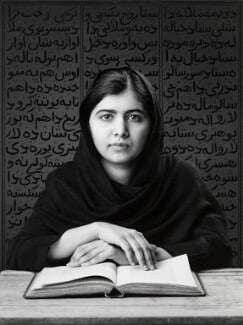 Born in Mingora, Pakistan, Malala Yousafzai is a human rights activist for female education. She came to prominence in 2009 after writing about her life during the Taliban occupation of her town Swat Valley, and the ban on girls' education. In October 2012, she was shot on the left side of her head in an attack by a Taliban gunman on her school bus. She recovered in Birmingham, UK, where she chose to remain with her family. In 2013, Malala was awarded the International Children's Peace Prize and in 2014, she became the youngest recipient of the Nobel Peace Prize with Indian activist Kailash Satyarthi. She founded the Malala Fund in 2013, which is dedicated to giving all girls access to twelve years of free, safe, quality education. She is currently studying Philosophy, Politics and Economics at the University of Oxford.

This is one of a pair of portraits by Iranian-born artist and film-maker Shirin Neshat. Neshat took a series of photographs before selecting two, onto which she has hand inscribed in calligraphy a poem by the Pashto poet Rahmat Shah Sayel from Peshawar, written in 2011. The artist recalled: 'I knew of Malala as an extraordinary young woman ... when I look back on our encounter, I am left with impressions of humility, wisdom and a rare sense of inner beauty.'