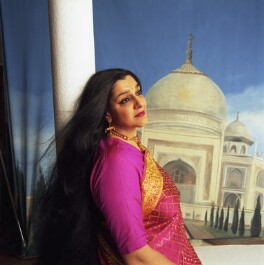 Comedian, actress and writer Meera Syal came to prominence with the late 1990s radio and television comedy show, Goodness Gracious Me, and the Emmy Award-winning television sitcom, The Kumars at No. 42, first shown in 2001. Both were groundbreaking in their use of humour to challenge and explore British Asian stereotypes and culture. Her first novel, Anita and Me (1996), about a British Punjabi girl and her English best friend growing up in the early 1970s, gained her the Betty Trask Award and was adapted for film and stage.

Born in Wolverhampton to Indian parents, Syal’s childhood experiences of growing up in the area, along with her British Asian background have informed much of her work. In this portrait, photographer Jason Bell presents Syal as a Bollywood actress. Taken shortly before the opening of the musical Bombay Dreams (2002), for which she wrote the screenplay, the portrait pairs Syal’s sari, theatrical expression and pose with the skewed and ruched painted backdrop of the Taj Mahal. The image alludes to the artificiality behind film and photographic production and surrounding social stereotypes.