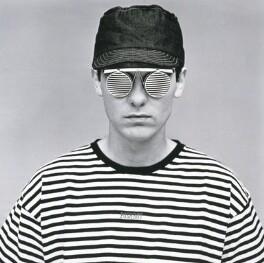 COMING HOME sees the Gallery sending portraits of iconic individuals to places they are closely associated with.

Born in Blackpool in 1959, musician Chris Lowe is co-founder of the Pet Shop Boys, the most successful duo in British pop history. After studying architecture at Liverpool University, Lowe moved to London in 1981, where he met Neil Tennant. With Lowe on keyboards and Tennant on vocals, the Pet Shop Boys have released 65 singles and 14 studio albums, over a career spanning forty years. Their creative partnership also includes musicals, ballets, and an orchestral piece based on the life of Alan Turing.

Lowe and Tennant cultivated a distinctive public persona and collaborated on music videos, tour design and album covers with leading artists, architects, designers, and choreographers. This iconic portrait of Lowe, wearing a pair of Issey Miyake sunglasses, was used on the award-winning 12-inch sleeve of their 1986 single ‘Suburbia’.

The Pet Shop Boys have received numerous accolades, including a 2009 Brit Award for their contribution to British music. During the ceremony, Lowe remarked: ‘I’ve always thought that music is about making people happy and having a good time. I think that’s because I come from Blackpool.’