In September 2010 I received an interesting message from the Gallery’s Collections Services Manager, Penny Hughes. During an audit of the Gallery’s store, the original plinth belonging to the Gallery’s marble bust of the writer, art historian and advocate of women’s rights Anna Brownell Jameson had been discovered. The bust, by the famous Victorian sculptor John Gibson, had been on display on a modern plinth at the Gallery’s regional partner in north Wales, Bodelwyddan Castle, since 1989. Should the plinth, which was in poor condition, simply remain in store? Or should it be conserved and reunited with Mrs Jameson’s bust? 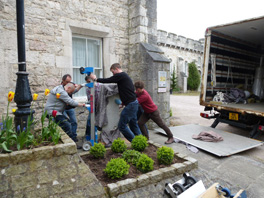 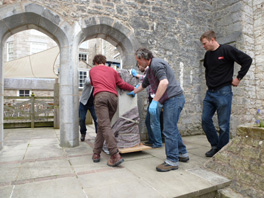 It quickly became clear that the plinth, with its elaborate inscription, was an item of importance in its own right and that plinth and bust should be reunited. Both originated from a subscription organised after Jameson’s death by her friend Susan Horner. Gibson had agreed to produce the bust at a low price out of his respect for Jameson and advised on commissioning its plinth from a mason who worked for his fellow sculptor, William Theed. Horner was insistent that the inscription should be long and informative pointing out that Prince Albert, no less, ‘wishes in this & other cases that there should be inscribed on the pedestal not only the name but some statement of the merits of the individual commemorated which he thinks too much neglected in our public statues, the people requiring instruction’. As an ensemble, then, plinth and bust bear powerful testimony to the Victorians’ belief in the emulative and educational power of portraits. 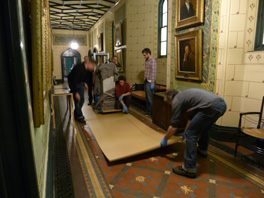 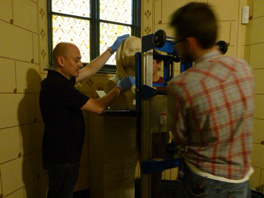 Conserving the plinth – and reuniting it with the bust in Wales – was no small task. It emerged from store dirty and chipped and sculpture conservator Pat Jackson took many months to restore it. She comprehensively cleaned it, including the complicated task of cleaning between the lettering, and filled and matched losses. Then there was the question of transporting it to north Wales and getting it into the castle given that Head of Art Handling Karl Lydon reckoned that it weighed 411kg. This also meant that a position where the floor could withstand such a weight had to be identified: eventually a space at the end of the Watts Hall of Fame was chosen. The operation took place early this summer with a team of five moving the plinth from the lorry, up a ramp into a courtyard, through a back door and eventually up the length of the Watts Hall of Fame taking care to protect the period floor tiles. The bust itself then had to be removed from its place in the Sculpture Gallery and lifted onto the plinth until finally the two were together again. 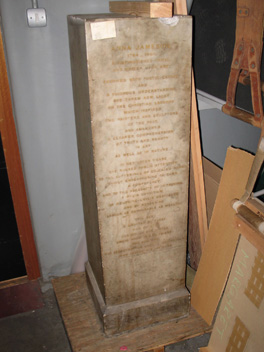 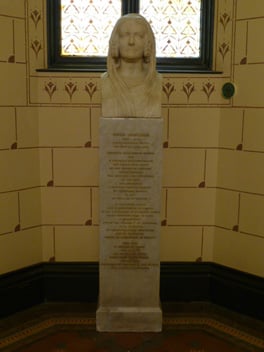 Image captions (from top to bottom)

Moving the plinth from the lorry

Protecting the tiles in the Watts Hall of Fame

Positioning the bust onto the plinth

The plinth in store before conservation

A fascinating account in terms of labour intensive, difficult to transport plinths that separately support and often intricately combine with bronze sculpture. Why are names of master masons never recorded? Who for example carved all the granite and stone monumental plinths, that support Queen Victoria around the British Empire - many executed by Francis Williamson? They have the same proportions and mouldings, so where did they originate?

A fascinating insight into the effort that goes into putting a portrait on display. Does the Gallery have many original plinths for its portrait busts? I suppose the Gallery came into the possession of this one as it has an important inscription and now most are lost to us? Do we know where the portrait and plinth were originally displayed? How did both come to be in the possession of the National Museum of Science and Industry till it was transferred to the Gallery in the 1880s?