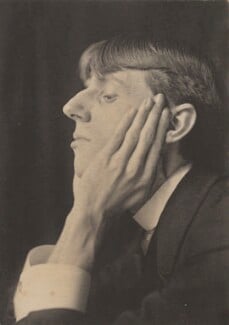 Currently on display in ‘Aubrey Beardsley: Artist and Aesthete’ is an iconic portrait of the notorious illustrator Aubrey Beardsley (1872-1898) adopting the pose of a gargoyle. The gargoyle in question, known as ‘Le Stryge’ or ‘The Vampire’, sits on the south tower of Notre Dame Cathedral overlooking Paris and Tour St Jacques, his beaked profile cupped in the long fingers of his hands. Beardsley’s mimicking pose was accidental but the parallel is quite appropriate for an artist whose lifelong endeavour was to depict the grotesque. 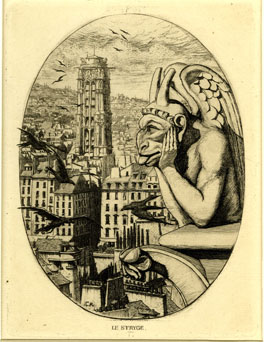 Le Stryge (The vampire) Etching, 1853 by Auguste Delâtre © The Trustees of the British Museum

The photograph was taken by the bookseller and photographer Frederick Evans (1852-1943). The two first met in 1889 when Beardsley, aged seventeen and jaded by his job as a clerk at an insurance company, found refuge browsing Evans's Cheapside bookshop in his lunch hour. Then an undiscovered artist, Beardsley would exchange his drawings for books and eventually it was Evans’s support that led to Beardsley’s first commission; to illustrate a new edition of Thomas Malory's "Le Morte d'Arthur." Though Beardsley grew to hate the project, it enabled him to give up the insurance company and become a full-time artist.

The subsequent photograph was made around 1894 when Beardsley was achieving notoriety for his scandalous illustrations. Evans spent hours studying Beardsley, wondering how best to approach his subject and later described the sitting:

‘There’s not much to be done with a face like yours,’ [Evans told Beardsley]. ‘You’re only a gargoyle, you know.’ Beardsley at once put his hands up to his face in the attitude made famous by the subsequent photograph. ‘That’s it! a gargoyle on Notre Dame,’ exclaimed Evans excitedly, and made the exposure.
(Interview with Alex Strasser, 1943, in Hammond 1992, p.150.)

Beardsley was delighted with the results and wrote to Evans:

This was the portrait used in early editions of Beardsley’s drawings and it marks a pivotal moment in both artist and sitter’s lives, as the defining portrait of Beardsley, and one of Evans's most famous works.

Find out more about this portrait.

Very interesting this post, which has allowed us to learning about Aubrey Beardsley, a great illustrator but unfortunately little known in Spain. Thanks and best regards from Barcelona.