Paul Cézanne (1839-1906) often painted in series; the most worked motif being his beloved Montagne Sainte-Victoire in the outskirts of his native Aix-en-Provence. He approached portraiture with the same process of intense repetition. The National Portrait Gallery’s exhibition features a number of his portrait series including the early playful portraits of his uncle Dominique Aubert, eleven portraits of his lover and wife Hortense Fiquet and various self-portraits made throughout his lifetime. The self-portraits are particularly revealing. They position the artist at significant moments in his biography and are helpful for tracing his artistic development. 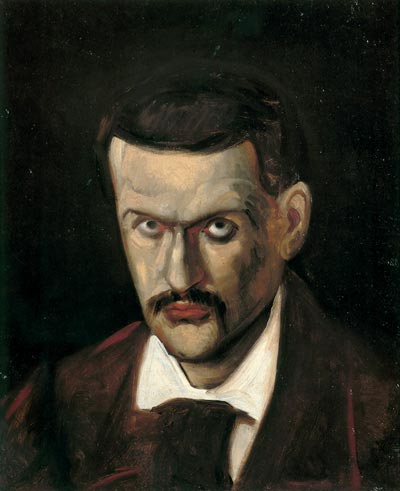 His first known self-portrait dates from the early 1860s, when Cézanne first learnt to paint in Paris at the Académie Suisse, alongside fellow artists Achille Emperaire and Pierre-Auguste Renoir. Completed after a photograph, his youthful face, dramatically lit, emerges from the shadowy background to reveal a brooding and discontented figure. The rather crude blood-red accents and simple modelling points to an artist at an early stage of experimentation. 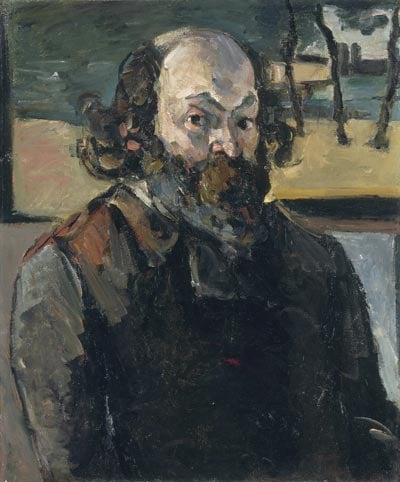 From 1872, Cézanne befriended the Impressionist Camille Pissarro, an artist he greatly admired, and temporarily moved to Auvers near Paris to practice painting outdoors. The influence of the Impressionists can be instantly measured by this self-portrait dating to c.1875. His palette has lightened, he uses finer brushstrokes and a light ground. Cézanne sits in front of a reversed landscape that can be identified as View of the Seine, Paris by Impressionist artist, Armand Guillaumin (1871), in whose studio this self-portrait was probably painted. With his hair unkempt and bushy beard, Cézanne seems to be cultivating an image of a primitive, provincial artist in contrast to the bourgeois artistic circle with whom he was socialising at the time. Cézanne refused famously to shake hands with painter Edouart Manet, claiming he didn’t want to make him dirty having not ‘washed for eight days’. 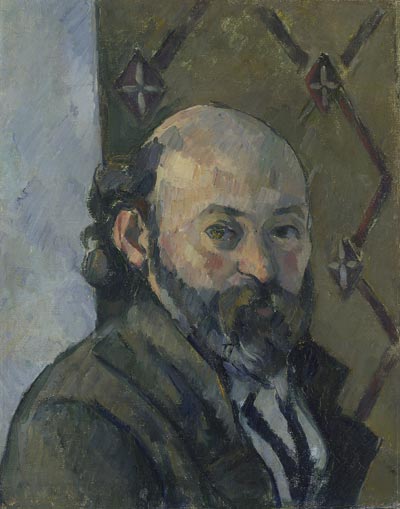 Cézanne’s self-portraits from the early 1880s mark a change in direction. He distances himself from the Impressionists, his beard is now neatly trimmed and he introduces a stylistic development in his work known as his ‘constructive brushstroke’ technique. This involves using ordered, similarly sized parallel brushstrokes to create a sense of volume, as in this 1880-1 self-portrait. The art critic, Adrian Stokes (1902-72), once commented that ‘considering the wonderful volume he always achieved for the dome of his skull’, it was very fortunate for Cézanne that he was bald. In this self-portrait, Cézanne seems to be taking much enjoyment out of modelling the egg-like volume of his bald head. 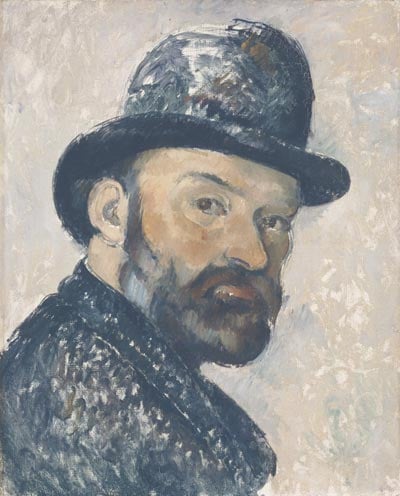 The exhibition features two self-portraits of Cézanne, painted in 1885-1886, showing the artist in a bowler hat. It is the first time this complementary pair is on show in the UK. Some believe they are wedding portraits as they are painted around the time he married his long-term partner, Hortense Fiquet in 1886. It is also around this time that Cézanne’s father passed away, leaving him with a considerable inheritance. The bowler hat may therefore be a nod to his father’s former profession as a hat seller. 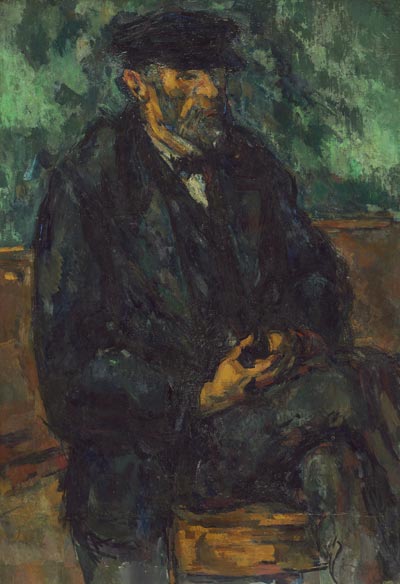 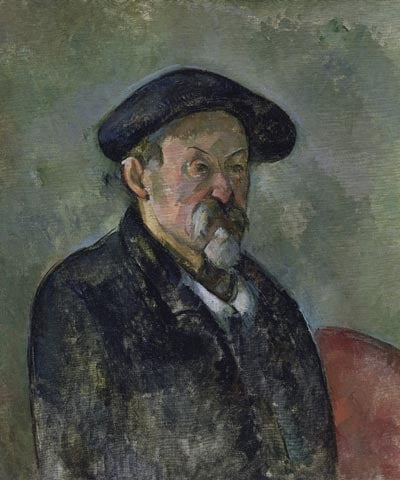 In 1902, having only recently begun to receive critical and commercial success, Cézanne moved into his new studio at Les Lauves in the hills of Aix-en-Provence. With his wife and son in Paris, it was his gardener, Vallier, who cared for him in these late years. He painted two series of Vallier; one outdoors and the other indoors in a dark and sombre setting. When Vallier wasn’t able to sit for Cézanne he would apparently don his gardener’s clothing and paint himself as Vallier, or perhaps Vallier as himself. As such, these works can be considered amongst Cézanne’s final self-portraits.

The self-portrait in a beret is actually known as Cézanne’s last self-portrait and is variously interpreted as showing an enfeebled man, but also someone with a sense of resolve. Cézanne continued to paint right up until the end of his life. This dedication to his practice is expressed in his final letter to his son, Paul, written just one week before his death: ‘I still work with difficulty, but I seem to get along. That is the important thing to me. Sensations form the foundation of my work, and they are imperishable, I think.’