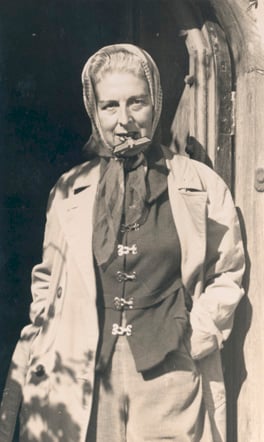 Claude Cahun lived her life in a spirit of rebellion and defiance. From her precocious teenage years as Lucy Schwob, defying conventional ideals of beauty and femininity with her shaven head and male attire, to her direct resistance of German occupying forces, she actively worked against the suppression of liberty and freedom - a life of resistance, which is encapsulated by this portrait, taken in May 1945.

But in many ways, until her active resistance during the German Occupation of Jersey from 1940 to 1945, her defiance was largely publicly unacknowledged. Her unhappiness with not being a respected player in the artistic and political Parisian scene, and her wish to move away from the spread of Fascism across Europe, may have been why she moved with her partner and stepsister Marcel Moore (aka Suzanne Malherbe) to Jersey in 1937 – a place they had known from happy childhood holidays. Her theatrical performances had received little public accolade and were short-lived. The outpourings of her subconscious mind, as dramatized in her autobiography Aveux non Avenus, had received little success in terms of sales or acclaim, even amongst her friends.

So Claude and her lover came to Jersey in 1937, perhaps to lick her wounds in an unthreatening secure environment. The couple were cocooned in a safe haven in their house La Rocquaise in St Brelade’s Bay, surrounded by many French-speaking, mostly wealthy people, living by the beach amidst beautiful wooded surroundings and right next door to the medieval parish church. 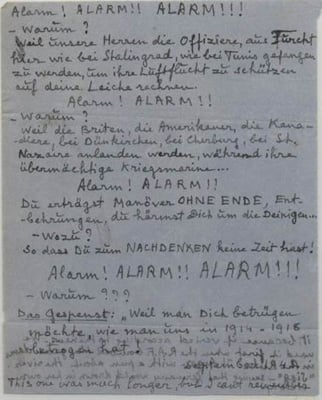 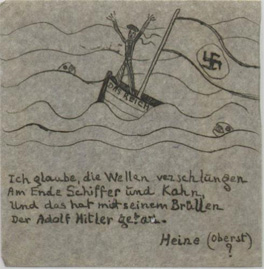 The arrival of German occupying forces in 1940 jolted them out of their sleepy idyll and drove them into dangerous resistance activities, which could have ultimately led to their deaths – even more courageous as Lucy Schwob was born into a Jewish family. Not content to just sit back and watch as the Island was taken over, Cahun and Moore created a two-person resistance campaign bent on inciting rebellion and dissension amongst German troops. They created the persona of ‘Der Soldat Ohne Namen’ (‘The Soldier Without a Name’) cast as a mysterious German soldier intent on inspiring rebellion from within the army by pointing out the idiocy of war and ridiculing the actions of the German commanders. These inflammatory words were typed onto sheets of tissue paper and either posted through the windows of German staff cars, or left in cigarette packets in the hope that someone would pick them up looking for an increasingly scarce smoke. The stepsisters would catch the bus into the main town, St Helier, disguised as little old ladies to blend in with the crowd and deliver their propaganda messages.

After four years of this subversive activity they were caught and arrested in July 1944 - charged with listening to the BBC and inciting the troops to rebellion. It took some time for the German authorities to bring the case to trial, mainly because they simply couldn’t believe that two old ladies could carry out this level of activity without the help of at least one man (they were only in their early 50s but being seen as ‘old’ was part of the disguise). In the meantime, German supply routes to northern French ports had been cut off by Allied advances, depriving Jersey of food and supplies, but also preventing people from being deported from the Island to death camps in Europe, as had previously happened to Louisa Gould, who died in Ravensbruck in 1944 after being deported for sheltering an escaped Russian slave worker. Cahun and Moore were sentenced to six years imprisonment for listening to the BBC, and to death for inciting rebellion. With typical dry humour, Cahun asked which sentence was to be carried out first. They refused to ask for leniency, but the Bailiff of Jersey and the French Consul pleaded on their behalf and the death sentences were commuted, although without the stepsisters’ knowledge or agreement. Claude and Marcel were the last prisoners to be released from prison just before Jersey’s Liberation on 9th May 1945.

A fellow prisoner, a German soldier, gave Cahun the badges from his uniform. It is one of these, the ‘dirty bird’ as it was known, that she clutches defiantly between her teeth in an image that is perhaps the culmination of her life of defiance. It is evocative of so much of Cahun’s life – her rebelliousness and scorn for oppressive authority, whether it be telling her what to look like, what was beautiful, how to think, what to feel or who to love.

For Cahun and Moore an execution in the cause of freedom and resistance would have been a fitting end to a life lived in the spirit of defiance. 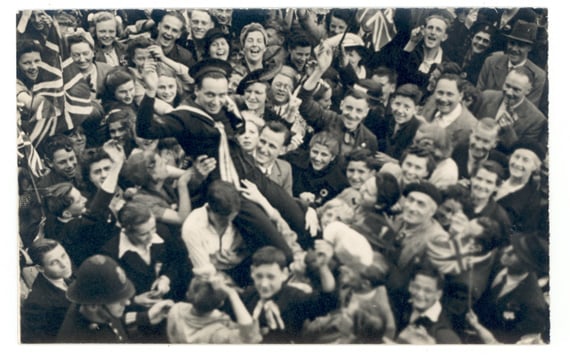 This is a locally well-known image of the Liberation taken by a photographer from the local newspaper. Claude is just visible in the crowd, an unsmiling pale figure amongst the happy celebrations, it is possibly her with her fingers raised in the V for Victory. © Jersey Evening Post

Gillian Wearing and Claude Cahun: Behind the mask, another mask is at the National Portrait Gallery until 29 May 2017