Co-curator Tarnya Cooper selects her favourite works from our current exhibition of Renaissance and Baroque drawings, The Encounter: Drawings from Leonardo to Rembrandt. 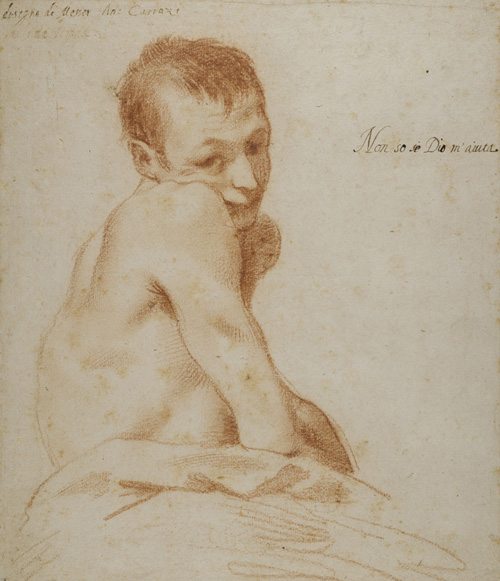 Study of a Young Man, mid 1580s, Annibale Carracci, The Trustees of the Chatsworth Settlement

This drawing appeals to me because it seems so heartfelt and so timeless.  You can’t help but wonder why the artist chose to portray this boy with his imploring look which reaches out to the viewer.  We know that Annibale Carracci apparently only felt at ease ‘with common people’ and he drew many studies of ordinary people including sympathetic depictions of the poor and destitute. The fact that this boy is naked from the waist up and his twisted spine is exposed seems to turn this drawing into a testament to lived experience. We can only speculate about the meaning of this brilliantly insightful drawing.  But did the artist perhaps ask the boy what he wanted the world to know about him?  If so, are the words ‘I don’t know if God helps me’ written to the left, the voice of the sitter? The great pleasure and fascination of working on this exhibition has been in exploring the informality and immediacy of drawings which can perform the trick of bringing the fabric of past, as windows to moments in time, so much closer. 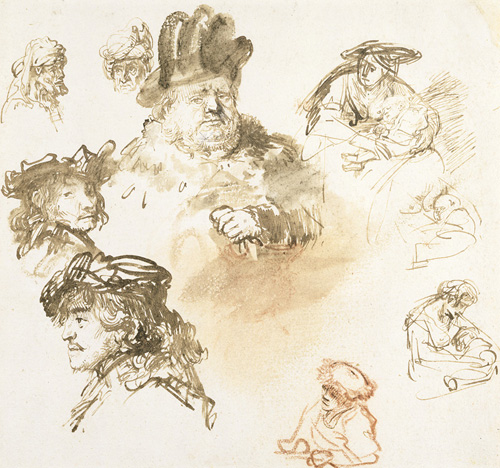 A Sheet of Figure Studies, with Male Heads and Three Sketches of a Woman with a Child, Rembrandt van Rijn, 1636, The Barber Institute of Fine Arts

It seems undeniable to me that Rembrandt is the world’s greatest ever draughtsman. We still have so much to learn from him. His brilliant ability to frame a look, capture a pose, and structure a whole composition in a way that draws you into the scene, making the viewer feel immediately present demonstrates his breathtaking vision and talent. After years of looking at his etchings and drawings, his invention and playfulness still surprises and delights me. This sheet of studies is an amazing survival, as most of his drawings with multiple figures have sadly been cut up by later dealers, feeding the hunger for tiny scraps of his genius. Here, he seems to be inventing the sketchbook page as a work of art in its own right. I like to imagine him in his studio focusing on those around him and artfully adding to the pages of his sketchbooks overtime. The medley of studies here includes a nursing mother, a boy who is perhaps an apprentice artist, and models posed in his studio wearing fancy hats and headdresses. 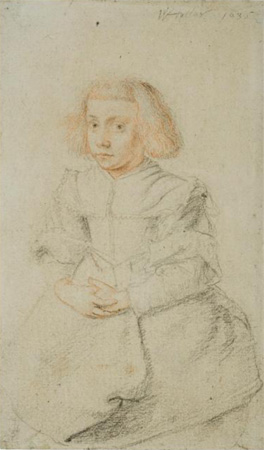 I like the way Hollar has captured this young child’s slightly unruly wiry red hair and wide-eyed stare.  This drawing seems like an old friend, as I first encountered it twenty years ago when working at University College London and it has stayed in my memory as a powerful study of childhood, capturing a neat young girl doing her best to show how good she is being by staying still. I wonder, did she remember this occasion for the rest of her life; the day a foreign artist made her the subject of his rapt attention, or was the moment quickly forgotten? We can’t of course know such details but I like to imagine that she remembered it and felt proud of being chosen, but perhaps also surprised when looking at the finished drawing, marvelling at the alchemy of the process of recreating her likeness on paper.

A Sheet of Figure Studies, with Male Heads and Three Sketches of a Woman with a Child by Rembrandt Harmenszoon van Rijn c.1636 The Henry Barber Trust, the Barber Institute of Fine Arts, University of Birmingham