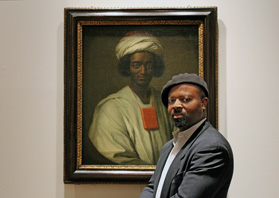 One of the things I find most rewarding about being a curator is seeing objects through other people’s eyes. This came home to me when looking at William Hoare’s portrait of Ayuba Suleiman Diallo with the Booker-prize-winning writer Ben Okri. When I first looked at the image, I saw an important historical object: the first portrait in British art to depict a freed slave.  Looking at the portrait with Ben, however, cast a spotlight for me on the emotional impact of the painting.

I was particularly struck by this at Ben’s creative writing workshops, which we organised in partnership with the International Slavery Museum, Liverpool, South Shields Museum and Art Gallery and New Walk Art Gallery, Leicester.  At all the venues, I was impressed by the audience’s passionate responses to the painting and to the complexities of Diallo’s story, as someone who had been both a slave and a slave owner.  I also enjoyed seeing Ben’s thoughts about the painting develop in response to these heated discussions.   He was writing a poem about the portrait that we were going to unveil at the National Portrait Gallery and I was eager to see how the conversations that we’d had with the public would influence Ben’s creativity.

When I first read his poem, I was blown away.  For me, Ben’s words capture the paradoxes of Diallo’s story and evoke the complex and continuous relationship between past and present.   It has been a privilege to be part of this creative journey.


As part of the display Ben Okri on Ayuba Suleiman Diallo: A Dialogue Across Time

To find out more about the display, click here.

The portrait of Ayuba Suleiman Diallo is on long-term loan to the National Portrait Gallery from the Orientalist Museum, Doha (OM 762)