Do you know who is with Audrey Hepburn?: Searching for rare early photographs

One of the biggest challenges associated with planning an exhibition devoted to photographs of Audrey Hepburn was that so many of the images of her were already published.  The exhibition would only be of interest to the National Portrait Gallery if it included a sufficient number of previously unknown and unexhibited images, a challenge I was glad to take on.  Some of the first images I came across during my research were a series of advertisements discovered published in The Sketch by Antony Beauchamp in which Audrey was uncredited but to my eyes recognisably her. Three from the 1949 sitting appear in the catalogue which accompanies the exhibition (including an important Hepburn estate loan) but two new ones, belonging to a member of the public, have subsequently come to light and are shown here for the first time (below). 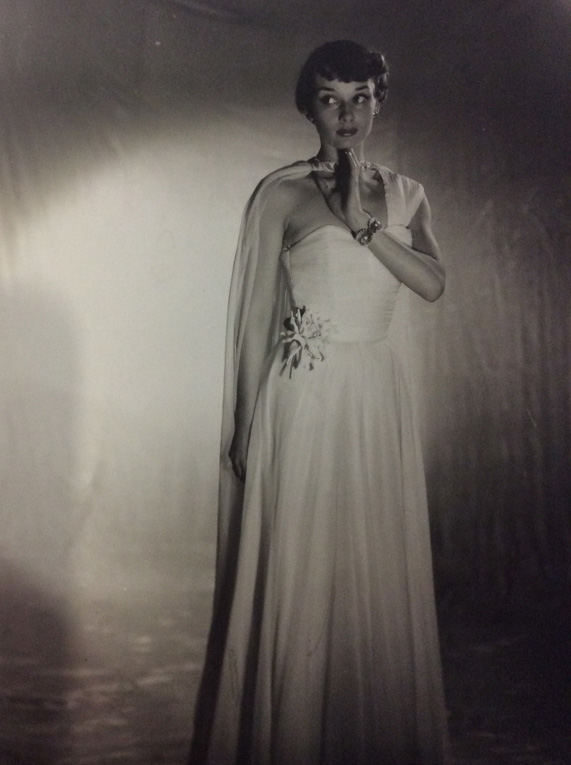 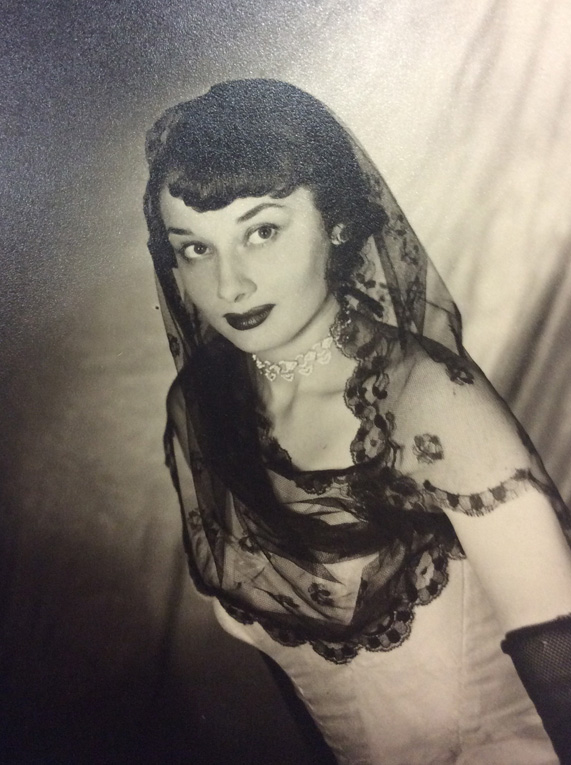 Another discovery that came too late for the exhibition but was just in time for the catalogue was the earliest performance picture of Hepburn (below – Audrey is in the back row, far right). Taken when she was attending a Boarding School in Elham in Kent at the age of seven, it captures her in her Brownie Club pack production of Humpty Dumpty. She attended the school near Folkestone in Kent from 1935, after her father abandoned his family, and moved to London. Run by the Rigden sisters, one of whom was a disciple of Isadora Duncan, it was here that Hepburn first began her interest in dance. The large group image raises many questions as to what happened to all her fellow Brownies. Can anyone recognise their relations here and add further identifications to the group in which Audrey appears on the back row at the far right? 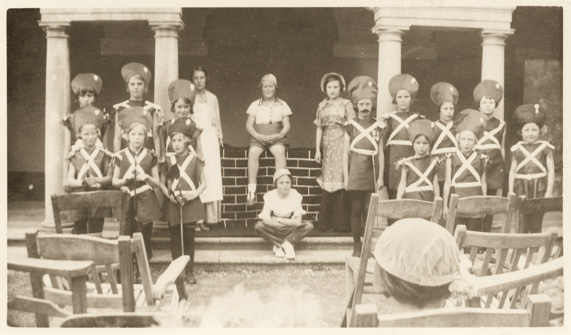 Another rare find was a magazine review I discovered for her first West End show as a dancer in a British production of High Button Shoes at the Hippodrome Theatre (below). This opened on December 22 , 1949, after a week’s preview in Oxford.  Audrey was one of ten dancers selected from one thousand who applied for auditions. Amazingly I also tracked down one of the other dancers, Diana Monks, who had fascinating early memories of sharing a flat with Hepburn and appeared in subsequent revues with her. 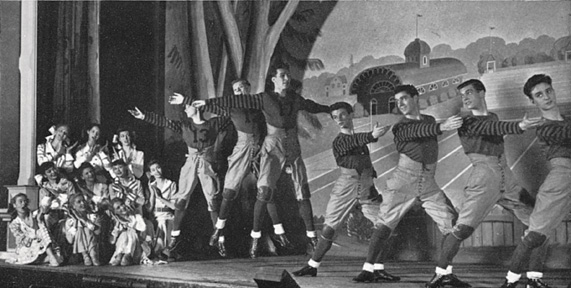 The final “first” moves the Hepburn story on to her film career. Kindly lent by a British collector of film memorabilia, it is a rare copy of the very first British magazine cover featuring Audrey Hepburn in colour. The film “Laughter in Paradise”, directed by Mario Zampi, only features an extremely brief appearance by Hepburn as a cigarette girl with one line:” Do you want a ciggie”. However such was Hepburn’s charismatic look this image became the talismanic icon that sold the film. The magazine cover is one of a large number assembled and shown at the end of the exhibition reflecting her enduring public appeal from 1948 up to 1993.

Next to this, (below, right)  and shown  for the first time is the very first magazine cover, so far discovered, featuring Audrey Hepburn. Photographed In Holland before she came to Britain on a dance scholarship, it coincided with the Dutch premiere on May 7, 1948, of her first film, a travelogue called Dutch in Seven Lessons, in which she appeared as a KLM stewardess. 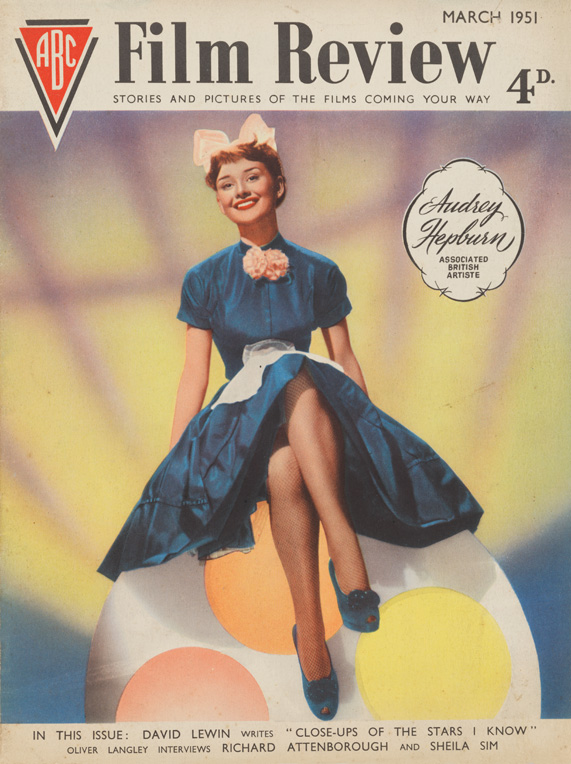 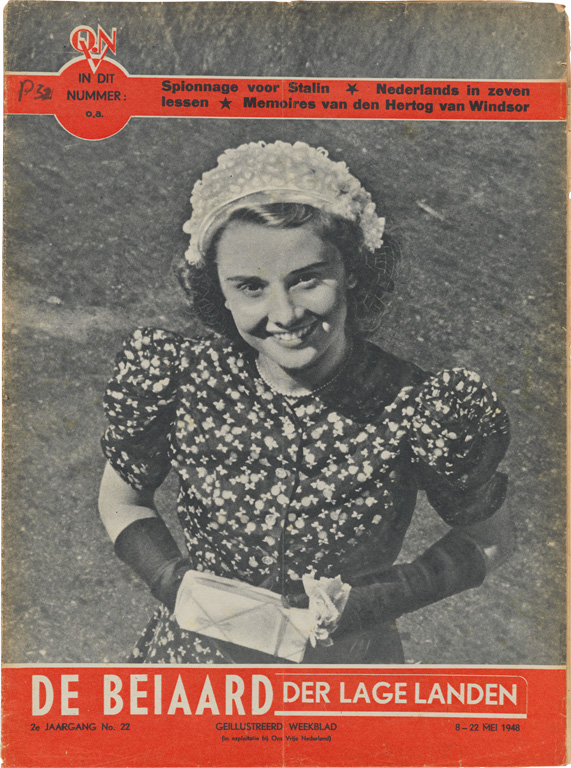 In the Elham Brownie Pack performance of Humpty Dumpty, photograph by Jerome,1936, Courtesy of the Matthew Cunningham Collection

Production photograph from High Button Shoes, at the Hippodrome Theatre, 1949 with groups of Boys and Girls dancers in their number "Next to Texas I love you" showing Audrey Hepburn, Second row, third from left, from Theatre World

Audrey Hepburn: Portraits of an icon is at the National Portrait Gallery until 18 October 2015

The exhibition is already a time ago! Sorry for my curiosity, but! I'm wondering if there are any result is posted with your search further to the identities of the other participants on Audrey Hepburn's possible very first acting experience. Peggy Phillips, her girl next door, (at the time of her stay at Orchard Cottage in Duck Street, Elham, Audrey lived with Mr & Mrs Butcher) that a corporal plays in Bill and Audrey a common soldier. (Translation tool)

Thank you to Kendra for your kind words about the research that Helen Trompeteler
my co-curator and me did with additional assistance from Imogen Lyons. The addition of Audrey's Ballet shoes broke new ground for an NPG photographic exhibition but have been widely appreciated as a reference to her many years of ballet training and a perfect pairing with another late item that turned up from a Private Collector who had a rare print of Audrey in the role of a Ballerina in the Christmas Revue in a scene in a toy shop as part of A Muffin the Mule Christmas show at the Cambridge Theatre. The ballet shoes had been purchased by one of the Gallery's patrons who had bought them at a fund raising charity auction in aid of the Marie Rambert dance school given by Audrey's two sons. Have just come across a fascinating article in Good Taste magazine from April 1955 in which "Audrey Hepburn Interviews Herself" in which she sets herself questions such as "Do you think you can act" and "Why do wear so much black?" and in answering "What personal complexities do you have?" she replies "I'm very self-conscious of my nose...Another thing I wish I had small feet (I take size sevens!)" Her height was also another reason she wasn't able to follow a classical ballet career but the next best thing was her appearance as a ballerina in her first major British film Secret People and then notably dancing with Fred Astaire and others in Funny Face

Terence, your detective skills concerning rare photos and documents is second to none. What are your secrets?! I really enjoyed the Audrey exhibition and was glad to see some 3-D objects (her ballet slippers) in addition to the photos. Excellent job on putting it all together with Helen!

Loved the Hepburn exhibition!
Having only just seen it I was intrigued to see a little video of Audrey bring shown in the Potting Shed at Mottisfont, near Romsey. I wondered if she was a friend of Maud Russell or what the connection was.She was talking about roses and obviously loved gardens.

Thank you to Rebecca Arnold for your kind remarks about the contextual images in the Audrey Hepburn exhibition. Both myself and co-curator Helen Trompeteler felt it was very important to show how published photographs were used in constructing her image and in many cases the contexts for why they were taken. We would have loved to have had more space to show the Skin cream advertisements that Angus McBean helped create next to the exhibition prints with contemporary text lines such as This Skin Is Not For Burning (inspired by the Christopher Fry play when they appeared in Vogue and other magazines in 1951 and 1952. There are a few more images in the catalogue than we had room for on the walls!

Thank you so much for this post - it is really fascinating to learn more about the depth of research involved in the development of the exhibition - which is clear to see when you visit. I am particularly interested in the ways she was depicted by magazines - and loved the wall of covers in the exhibition and seeing two early examples here. It's so important to contextualise these portraits within the broader range of images on view in the exhibition.

Hello Donna, Thank you so much for your comment about the Dutch magazine De Beiaard that ran the first cover photograph of Audrey Hepburn in 1948. I had no idea what the title meant so it was very charming to find out. The magazine seems to have been quite short-lived but will always be remembered for its cover of Audrey on her first film role if How To Learn Dutch in Seven Lessons

Thanks to SO AUDREY HEPBURN for your comment that most images in this Blog are new to you. Although the ABC Film Review Cover is well-known from reproductions it was very exciting to show a rare original copy of the issue in the exhibition, kindly lent by Robert Copper. Also I must say how much I enjoy seeing your SoAudreyHepburn account on Instagram with your 25,000 followers and over 1000 posts

Thank you for all the work you have done bringing these rare and unique photos for our viewing! Hope you are also going to share some of the stories that you are gathering from Diana Monk and others. Wonderful for those who appreciate and adore that gracious spirit and want to learn more about her fledgling career steps. There is probably more to find. We don't unfortunately hear much of Audrey's participation in the 1949 Roehampton Theatrical Garden Party and her radio, television work in London. Look forward to learning more and thank you for sharing this view into her past. Magical!

The title of the Dutch magazine is De Beiaard, which refers to a bell chime, or a persoon chiming bells (think of the smaller bells of a church).