As the curator of the Gallery’s twentieth-century Collection, I am particularly thrilled about the recent acquisition of Augustus John’s portrait of Dylan Thomas, which has been made possible with support from the National Heritage Memorial Fund, the Art Fund and The Thompson Family Charitable Trust.  The portrait has been on long-term loan to the National Portrait Gallery for over two decades and recently became available for acquisition.  The possibility of it not becoming a permanent part of the Gallery Collection was for myself and my colleagues, absolutely unthinkable.  Whilst I have many favourite portraits in the Gallery which tend to wax and wane, my own devotion to John’s portrayal of the incredibly youthful poet has never wavered, and the work was established as my favourite in the Gallery before I had even began to work here. It is small, and does not seem to demand our attention in the way that a large-scale ‘swagger’ portrait may do, and is not painted with a bravura technique, but it is an extraordinary pairing of artist and sitter. The palpable intimacy that exists between Augustus John and Dylan Thomas in this work, for me, makes it utterly compelling. 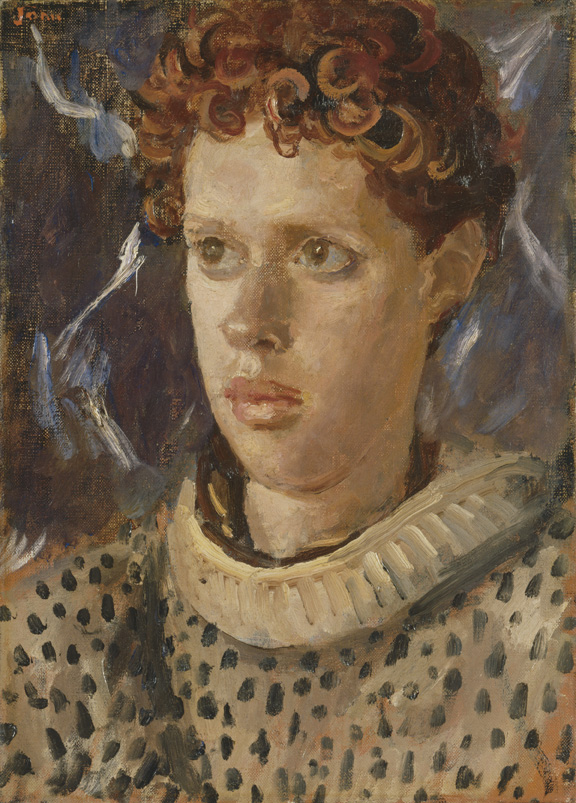 It is hard to believe that the wide-eyed boy portrayed in this portrait had already established his reputation as one of the leading poets of his generation, having published two collections: 'Eighteen Poems' (1934) and 'Twenty-Five Poems' (1936), including the poems ‘And Death shall have no Dominion’ and ‘The Force that through the Green Fuse Drives the Flower’. Furthermore, Thomas’s wholesome appearance, with his unruly red curls, and the chunky fisherman’s jumper, is hard to square with the portrait’s history, emerging from the rackety, bohemian world of London’s pre-war Soho and Fitzrovia, the artistic districts where both artist and sitter were already established as fixtures – and where Thomas developed his dangerous affection for alcohol.

Swansea-born Thomas had gravitated to London in the early 1930s, meeting the painter and fellow Welshman Augustus John at the Fitzroy Tavern on Charlotte Street. The two furthered their friendship during many evenings there and in the nearby Marquis of Granby on Rathbone Street. In the spring of 1936 the painter introduced Thomas to Caitlin Macnamara, whom he married the following year. Thomas sat for John twice shortly after his marriage, during visits to Hampshire to stay with Caitlin’s mother, who lived close to John’s studio. Both portraits were probably painted in late 1937 to early 1938. My favourite quote from John, when describing his relationship with Thomas relates to these portraits: ‘I got him to sit for me twice, the second portrait being the more successful: provided with a bottle of beer he sat very patiently’, indicating Thomas’s almost child-like obedience when given his favourite treat – something that comes across so strongly in this portrait. It is almost as though Thomas is holding his breath as he waits patiently for his friend to complete his work. It is not certain if the National Portrait Gallery’s version is the first or the second (the other portrait is in the National Museum of Wales).

The portrait will continue to remain on almost permanent display in the National Portrait Gallery, and the acquisition also means that it will also be part of the Gallery’s exciting project, Coming Home, where it will be shown at the Glynn Vivian Art Gallery in Swansea, Thomas’s home city, in 2019.

Many thanks for your comment and thoughts on this portrait. We are always happy when works in the Collection encourage debate around the artists and the sitters represented. Augustus John is widely considered to be one of the finest British portrait painters of the 20th-century, but as with any artist, will not be universally admired. The Gallery already holds several works by John, and he is represented in numerous major public collections including the Tate. The importance of the sitter represented is always the primary consideration for inclusion in the National Portrait Gallery Collection and the close relationship Dylan Thomas had with the artist were certainly compelling factors in the acquisition of this portrait.

Technically poor. Perhaps the fact that it is a portrait, plus the story vehind it, are the only factors that qualify this work to become a permanent piece in the gallery.