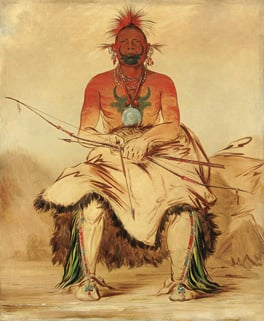 The co-curators of the exhibition George Catlin, American Indian Portraits, Stephanie Pratt and Joan Carpenter Troccoli, discuss their work on the project together.

Soon after the opening in 2007 of the Between Worlds exhibition at the National Portrait Gallery, Director Sandy Nairne suggested the idea of a George Catlin exhibition to Stephanie Pratt.  In the same year, Joan Troccoli met Mick Gidley, a professor at the University of Leeds, and asked if he knew of scholars in the UK who might be interested in George Catlin, as she was working on a book partly about the works he made in Britain.

Joan and Steph: Mick put the two of us together and we have been working on this exhibition at the National Portrait Gallery virtually ever since.

Steph: The work of George Catlin has always intrigued me, because the American history books I loved as a child were filled with his images. I pored over them not for the cowboys, but for the Indians.  I wanted to understand more about my Native American father’s heritage and Catlin seemed a good place to start.

Joan: I discovered Catlin twenty-five years ago. At that time I was less interested in his art than I was in what motivated him to sacrifice everything—his family, his country, and his financial security—to his mission of painting Indians.  Now, while I’m still fascinated by him as a quintessential American character, I’ve come to realise what a great artist he actually was.

Steph: I heard from Joan out of the blue in the spring of 2008.  She was coming to London and wanted to meet me and I hoped she might consider working with me on a show about Catlin. I knew of Joan from the major Catlin retrospective at the Smithsonian American Art Museum in 2002, so I thought she might be a good addition to the team. Part of my plan was to build on the strengths I had in studying artistic representations of American Indians with some of Joan’s scholarship on Catlin.

Joan:  When Steph asked, I immediately agreed.  Naturally, working with the National Portrait Gallery is a great honour, and the opportunity to curate a Catlin show with someone approaching him from a perspective so different from my own art-historical point of view was irresistible.

Steph:  Collaborating with Joan has transformed my own approach to Catlin, because I feel as if I can now see him from a more rounded perspective.  Joan has been able to focus attention on some of the less well-understood aspects of his work. She’s pin-pointed shifts in his style, such as his 1832 trip up the Missouri River, and the impact on his work of his experiences in Europe.

Joan: The other best thing about this exhibition is that the Smithsonian American Art Museum gave us almost carte blanche in our choice of paintings to borrow. This show has all of Catlin’s range and complexity as well as his greatest works.

Steph:  Catlin is an important trans-Atlantic figure and, like myself, he had to make his career in the UK as an American. With the exhibition open, I’m going to miss the trans-Atlantic exchanges I’ve had with Joan.

Joan: Me too! We’re going to have to think up another project!

Superb exhibition. Amazing portraits. Finally after reading and studying Native Americans for a few years I had the opportunity to see Catlin's amazing work. I can't wait to go back and attend some of the events being held during this exhibition. I spent a small fortune in the shop too!

I hope to see more exhibitions of Native American art & culture at the National Portrait Gallery.

the review sounds interesting from an artist point of view i would recommend to myself or other artists
for influence research as i like illustration.