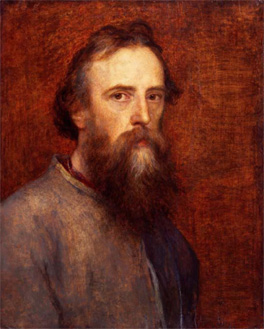 In 1884 the life’s work of one of England’s greatest painters sailed across the Atlantic to America for an exhibition at the Metropolitan Museum of Art in New York. This fascinating story of international art lending is just one of many to be found in the correspondence of George Frederic Watts. 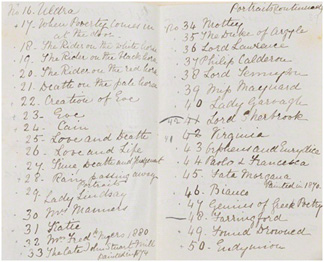 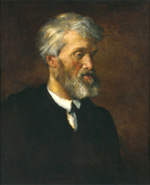 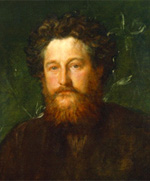 The G. F. Watts collection, held at the National Portrait Gallery Heinz Archive and Library, contains correspondence covering his life and work. For the first time the collection will be fully catalogued with detailed descriptions for each individual letter; enabling researchers to free text search the collection online.

Over the past months I have been cataloguing the vast collection (a project which was made possible by a National Cataloguing Grant, managed by The National Archives.) One interesting discovery that I have made is the story of Watts’s relationship with an impressive young American, Miss Mary Gertrude Mead (later Mrs Edwin Austin Abbey). Mead arranged the exhibition of Watts’s work in New York, establishing him as one of the first British ‘International’ painters.

In 1878 Watts exhibited nine pictures at the International Exhibition in Paris, where Mead saw his work for the first time. She was so impressed that when in London she visited the gallery at Little Holland House, where Watts lived, and met him. They became friends and she made up her mind that his work must be shown in America.

The letters reveal that Watts was very difficult to persuade. He feared for his collection and, not wanting to be separated from his works for so long he worried about transporting them and how the pictures would be received abroad. His reputation was at stake. 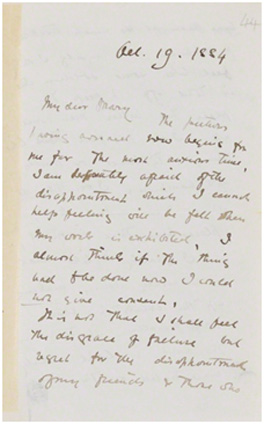 ‘My dear Mary, The pictures having arrived now begins for me far the most anxious time. I am desperately afraid of the disappointment which I cannot help feeling will be felt when my work is exhibited. I almost think if the thing had to be done now I could not give consent.’

Yet the exhibition was a huge success and Watts was asked if the pictures could remain for longer than expected. Watts, pleased with the success of the exhibition, donated the painting ‘Love and Life’ to the American nation.

The online archive catalogue will be available in early 2014.

Thank you for your comment, glad you liked the post.
The 53 paintings, an engraving of Watts and photographs of ‘The Three Eves’ were packed together and sent together aboard a ship to Canada on the 17th September 1884. All of the art works were Watts’s own, bar two: ‘Bianca’ and ‘Virginia’, which belonged to Watts’s principal patron, Charles Hilditch Rickards. I am not aware from the correspondence how much the full collection of art work was insured for but the correspondence details that ‘Bianca’ was insured for one thousand pounds, and ‘Virginia’ for four hundred pounds. I am afraid that the collection of correspondence that we hold at the National Portrait Gallery does not allude to all the practical details of the transfer but I can tell you that Watts did not travel with the paintings, nor did he journey to America to see them exhibited.
Mary Gertrude Mead (1851-1931) was the daughter of Frederick Mead of 1 West 56th Street, New York, who married Edwin Austin Abbey, R. A. (1852-1911), an American artist, illustrator, and painter in 1890 in New York. From the correspondence collection and secondary sources it seems that Mead was a very adventurous and impressive woman and Watts was very fond of her, and it was her charm, flattery and knowledge of art that persuaded Watts to agree to the exhibition.
The catalogue, which contains detailed descriptions of the letters, will be able to tell you much more about their relationship. Correspondence between G. F. Watts and Miss Mary Gertrude Mead is contained in GFW/1/10 and GFW/1/13.
The catalogue will be available to search online from early January 2014 and the collection is available to view in the Archive and Library by appointment.
http://archivecatalogue.npg.org.uk/Public/DServe.exe?dsqApp=Archive&dsqCmd=Index.tcl
Please see the Archive and Library homepage for more information about our services.
http://www.npg.org.uk/research/archive.php

Thanks for the insight!
Did all the paintings go on one ship? That would surely have been too risky? And were they insured? And, if so, how much for? I'm fascinated by the practical details! Who did the packing? And in / with what? Did someone accompany the paintings - as I understand happens now with high value exhibits?
Lastly, Mary Mead sounds a formidable - or at least persuasive - woman. What else did she do, do you happen to know?
With thanks
Caroline