Katherine of Aragon – Queen of England 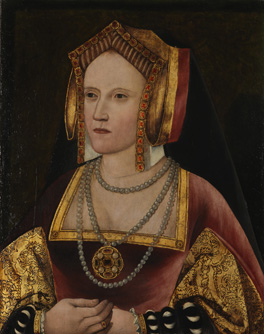 The recent conservation of a rare early portrait of Katherine of Aragon, which is on long-term loan from Lambeth Palace, has presented the Gallery with the opportunity to display portraits of Henry VIII and Katherine of Aragon together as a pendant ‘pair’. The two works, from around the same date, are of a similar scale with a similar green damask background, and it is likely that they are both examples of portrait ‘types’ that would have been placed together in this way, nearly five hundred years ago.

However, Henry VIII is notorious for marrying six times, with the identities of his wives occasionally reduced to the rhyme: ‘Divorced, Beheaded, Died / Divorced, Beheaded, Survived’. As a result, displaying the portraits of Henry and Katherine together makes an interesting statement about their relationship within the context of the other portraits in Room 1, particularly those of Anne Boleyn and Catherine Parr, his second and sixth wives. 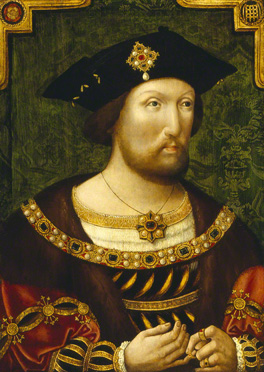 By the time these paintings were produced Henry had already recognised his illegitimate son, Henry Fitzroy, and he would begin his relationship with Anne in 1526. Henry and Katherine’s marriage was finally annulled in 1533, and although Katherine considered herself to be the only rightful queen until her death in 1536, bringing these images together regenerates an iconography that Henry went to great lengths to unpick. With each new marriage the traces of his previous wife would be erased from the decorative heraldry that adorned practically every surface in the Royal Household. It is notable that of all his wives there are only portraits of Jane Seymour, who bore him a male heir, and Catherine Parr, who survived him, listed in the inventory of his possessions taken after his death. Nonetheless, Katherine of Aragon was his queen for nearly twenty four years, and was perceived and portrayed as such across the country. Therefore, it seems fitting to reunite the pair in these two remarkable portraits dating from the time of their marriage.

Katherine of Aragon, by an Unknown artist, oil on panel, c. 1520, L246. By permission of the Archbishop of Canterbury and the Church Commissioners.

As part of the display Henry and Katherine Reunited

Considering Catherine was the queen for much of Henry's reign it's certainly appropriate to have the portraits together.

This was a Queen with more right to the throne than her husband, which may be one reason he married her?

I hope to pop in and have a look soon!

Brilliant idea bringing these two portraits together again. With all the drama surrounding Henry's subsequent wives, it is easy to forget that he was initially very happily married to Catherine.