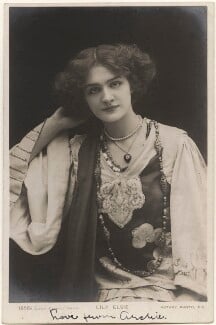 From December 2018-June 2019 I had the opportunity to catalogue part of a large collection of photographs given by former Head of Photographs Terence Pepper. This collection of more than four thousand images ranges from early 20th Century postcards to 1960s portraits, of which I catalogued those by leading photographers Cecil Beaton, Tom Blau, Carl Van Vechten, Angus McBean, and rediscovered women photographers Eleanor Holmes (1862-1946) and Lilian Beel (1875-1940).

One of the main collections I catalogued in the first few months was an album of photographic postcards by Lizzie Caswall Smith (1870-1958). From 1902-1920 she operated the Gainsborough Studio at 309 Oxford Street, and first exhibited at the Royal Photographic Society in 1902 and then again in 1913. Her elder brother John Caswall Smith (1867-1902) trained her. He ran a studio at 305 Oxford Street until his death in 1902 which Lizzie then took over. Lizzie Caswall Smith was a supporter of the suffrage movement and photographed many key figures including Christabel Pankhurst and Flora Drummond, images that were then made into iconic postcards. As well as these, her main work was portraits of Edwardian stage performers such as Lily Elsie [Fig. 1], Billie Burke, Gertrude Elliott and the renowned 'Gibson Girl' Camille Clifford. I particularly enjoyed dating the photographic postcards through careful study of stamp dates, publishing companies, and most notably which theatrical costumes they were wearing. 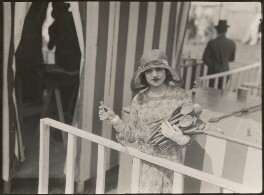 Another collection I catalogued consisted of contact prints by Dudley Glanfield (1904-1992) including groups from London Theatrical Garden Parties between 1929-1932. Stars such as Hermione Baddeley and Ursula Jeans attended the garden party in typical late 1920s fashion, and partook in raffles as well as the egg and spoon race [Fig. 2]. In contrast to the studio photographs of Caswall Smith taken on a large format camera, Glanfield used a handheld camera for outdoors press photographs. I found this collection interesting for its depiction of stars outside the formal photographic studio, outdoors and active, as well as to see their choice of clothing for such an event. Hermione Baddeley wears a wide brimmed cloche hat, floral printed silk dress, and dark red lipstick. Archive film of several other theatrical garden parties of this era can be seen online at the British Film Institute.

An image I spent some time researching was taken by an uncredited photographer for Paramount Productions in Hollywood of Marlene Dietrich having her portrait sketched by artist Sir John Lavery (1856-1941) [Fig. 3.]. The artist had made portraits of Dietrich previously in London, but this was taken on the set of I Loved a Soldier in 1936. Dietrich wears an Eastern European embroidered costume in her role as Anna Sedlak. The film, directed by Henry Hathaway, was unfinished and originally titled Invitation to Happiness, based on Pola Negri’s 1927 Hotel Imperial. According to press at the time, there were ‘on-set altercations’ between Dietrich and the director, which lead to the actress leaving, and Margaret Sullavan (1909-1960) replacing Dietrich for the release of Hotel Imperial years later in 1939. This unusual photograph combining costume and art offers insights into an unfulfilled role of Dietrich’s as well as a chance to discover a long lost portrait by Lavery. 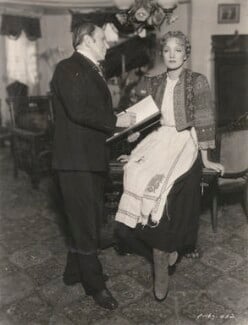 Sir John Lavery and Marlene Dietrich in costume as Anna Sedlak on the set of 'I Loved a Soldier'
for Paramount Productions Inc.
1936
NPG x194400

An entertaining photograph to catalogue was of the Bee Gees’ singer Barry Gibb being awarded the John Stephen Fashion Award for ‘Best Dressed Personality of the Year’ by actress Tsai Chin on the 7 July 1966 [Fig. 4]. The award is a figure of Beau Brummel (1778-1840) who was an icon of men’s fashion in Regency England. The background of the photograph shows a crowd filled Carnaby Street, and a description on the back of the photograph notes that many of the crowd members were fainting from the excitement, and had to be carried away — not far from my reaction in the archive to any iconic photographic gems.

I also enjoyed researching a photograph taken for Central Press of John Lennon and Yoko Ono in their Bed-In at the Amsterdam Hilton Hotel taken on the 27 March 1969 [Fig. 5]. To enhance the couple’s desire to promote world peace, for one week international press were invited into their room each day between 9am and 9pm. Because of the countless number of photographers who documented them during this period, I was unable to identify the precise photographer working for Central Press, but we welcome comments. It is fascinating to view images from this event which were taken from a reverse angle in the room, with the crowd of photographers in view.

It was a wonderful opportunity to research and discover these photographs, and to maintain a dialogue for them. Most notable was the interrelationship between photography and fashion, and the narratives these enabled. It was also significant to concentrate on photographs as objects rather than images viewed on a flat screen, their physical properties contributing to their identification through stamps, condition, printing process and labels. The far-ranging formats, styles and artistic intentions of the photographic highlights mentioned in this blog make for a great reflection on the prolific nature of imagery today. 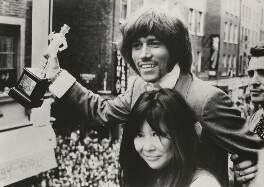 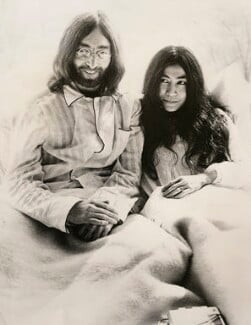 Fascinating! Well done and good luck for the future.

Fascinating overview that shows just how important photography is in bringing variety to the collection of the National Portrait Gallery! Well done Grace!

Very interesting and informative. I never thought Dietrich beautiful till I saw your picture.