Could you tell us about your background as an artist and how you started?

Yes, indeed. First, thank you and the National Portrait Gallery for speaking with me. As a little boy, I was drawn to nature and jumbo-sized Crayola crayon boxes. After college, I threw myself into New York City and attended FIT (Fashion Institute of Technology). There, I fell in love with the idea of fashion drawing. I was so inspired by the craft that I bought a one-way ticket to Paris in 1987 to pursue a career there. Not too long after my arrival, I landed the cover of Joyce Paris magazine. This led me to collaborate with Christian LaCroix for the magazine. And it was Monsieur LaCroix who encouraged me to begin painting. I eventually returned to New York to pursue painting. In the early days, I practically lived in art supply stores and visited museums every day.  Talking with fellow artists in art stores and studying works at MOMA and the Met (for hours on end), is how I honed my craft. I was eventually represented by a gallery in Soho, New York City in 1993. 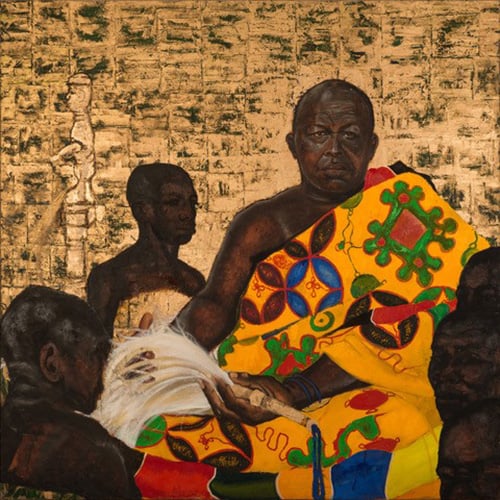 What draws you to a particular sitter and could you talk about some of your other subjects?

What draws me to the sitter is their energy and spirit. The sitter must captivate my curiosity. I try to find the DNA in everything I create.

I painted the king of the Asante, Otumfou Osei Tutu II, from YouTube video and photos. When I was invited to bring the painting, it was not magic at all. He is the epitome of royalty; a beautiful and powerful presence. When I realized that his soul did not translate to the canvas, I knew I had to bring back the painting to America to add his essence. I love the painting now. I can still hear him talking.

Some of my other subjects are influenced by history.  I enjoy conjuring images and crafting their backstories. Buffalo Warrior is a character that I created who is featured in a series of my works. He is a hero, our hero born in the cotton fields of America who joins the historic African-American Buffalo Soldiers and ultimately becomes a superhero. The series is an ongoing adventure on canvas.

How did this portrait come about?

The portrait came about through Zahara’s mother (Angelina Jolie). Angie was introduced to my work by a mutual friend and we hit it off. She even visited my gallery at the time and acquired one of my paintings. Around that time, I appeared on a popular TV show called LA Stories with Giselle Fernandez. From what Angelina shared with me, Zahara watched my interview and said, “He seems nice”. Soon after, Angie asked if I would be interested in painting Zahara. I was so flattered and humbled. Right before meeting Zahara, I took my time and a deep breath. I wanted to really take in that first look; that first feeling when we finally met. That first impression heavily influenced how I captured her on canvas. 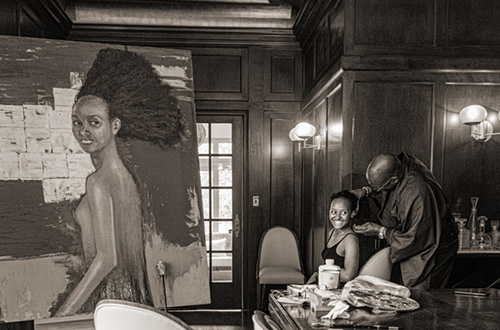 What are the particular challenges of painting a subject in this transitional phase as she approaches womanhood?

Zahara has a shy nature. She is incredibly kind, intelligent, and engaged. Her presence is felt in every room she enters yet it is quiet and powerful. She is other worldly, an old soul who can discuss anything from politics to the mysteries of outer space.  When we first met, I saw this regal 14-year old young girl on the verge of womanhood destined for greatness. My challenge during the commission was to imagine Zahara’s future self. I had to use a lot of foresight to portray the 15-year old young woman she is now.

Zahara was born in Ethiopia so I delved into the history and culture of her country of origin. During this process, I came across a wooden sculpture by an Ethiopian artisan that helped inform the work. It was a great find. It helped me figure out how Zahara would appear in the portrait and inspired the hues, palette and shapes. I also adorned her hair with custom gold coins I designed. The gold coins are inscribed with Zahara’s name and birthdate in Amharic in homage to the land of her birth. I wanted Zahara to emerge from the portrait, owning her personal space and power. 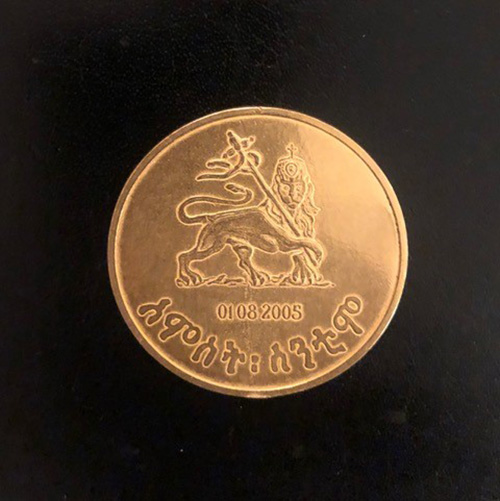 What was your sitter’s reaction to the portrait?

Her reaction was one that I will never forget. The unveiling took place at her home with her mother and siblings. At first, the room was silent and still. Then there were whispers saying how beautiful they thought she was. Angie told me “Thank you for helping me show her, her beautiful self.” I was overjoyed that Zahara and her family were pleased with the work. 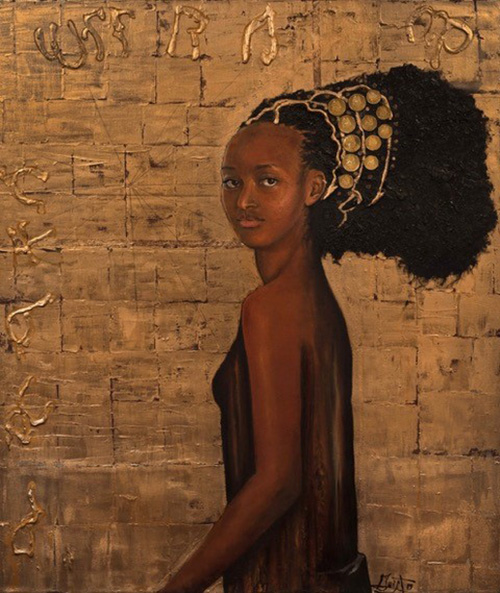 Could you share with us something about your process? Do you prefer to work from life when at all possible and how many sittings did you have with this subject?

My process starts with Japanese calligraphy. I learned this craft during my extended stays in Japan. Underneath all of my works are reedy, quick line drawings. I love immediacy as well.  Then I lay in my hues and my marks. I like to compare it to a musician creating a concerto or Jazz solo.

I prefer to work from life. I do not like the idea of my subjects staying still. I like to experience them in real time as a reference. It’s how I discover nuances in behaviours, which can translate onto the canvas.

I only sat with Zahara about five times and we even played scrabble. We spoke of Ethiopia and our travel experiences in other countries in Africa.

In this portrait, could you explain the significance of the text surrounding the image?

Indeed, as I mentioned above, my efforts are to move as close as I can to authenticity.  By discovering this ancient text, I wanted to have it included in the story, the feeling of when we see the Egyptian hieroglyphs. This writing should remind us of the old Kingdom of Ethiopia dating back to 3,000 BC. I just artistically bent the lettering a bit.

Do you approach a commissioned work in a different way to other portraits?

When I am working on my own so called portraits, I am conjuring the face, the body language strictly from my imagination. Starting with the eyes, then working down to the mouth, and we start the conversation as to where the direction will go and ultimately end up. I'm telling a story from my imagination. When a sitter is in front of me, I'm starting from the inside and trying my best to tell their personal story. 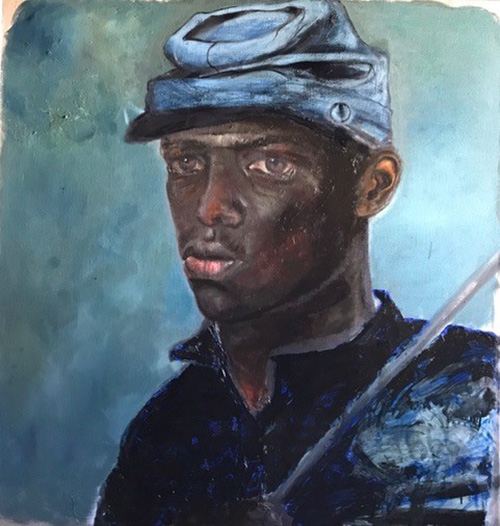 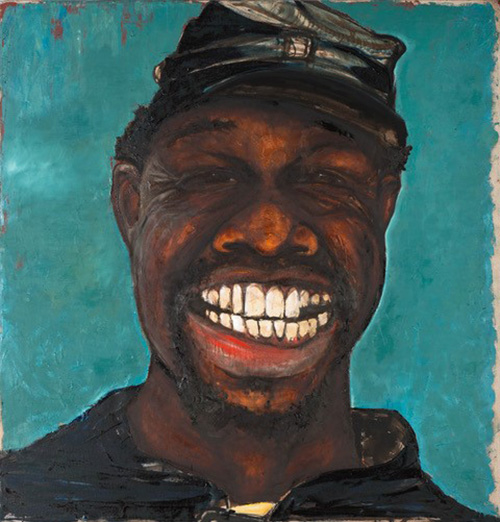 Which artists, contemporary and historical, have influenced your work?

My early influences are Giorgio de Chirico and Salvador Dali. As I have evolved as an artist, Balthus, Romare Bearden and Picasso have become favourites. Encountering Julian Schnabel, Francesco Clemente and Emilio Cruz in the early nineties also impacted my work. I also have profound respect and admiration for John Currin and Kerry James Marshall. But I must also always stay true to my own voice.

How familiar are you with the National Portrait Gallery collection and are there particular portraits that you admire?

I am very familiar with NPG being the first and foremost portrait gallery in the world. While I lived in Europe, I visited the gallery as many times as I could. The gallery is my favourite along with Met and MOMA in New York City. It’s hard to narrow down particular portraits I most admire. I will say that Hockney and Freud’s portraits move me the most.

Contemporary black artists are articulating their presence at a time of heightened vulnerability for people of colour. Has the Black Lives Matter movement influenced you as an artist?

It was not the Black Lives Matter Movement that influenced me. It is the awareness of how the world is operating in such delusion that inspires me. It inspires me to converse through my art to what truth is. The Black Lives Matter is a movement that has profoundly ushered in a global lens to a reality that I and people other than the European diaspora has lived with. There have been artists other than European who have been creating amazing, important work for hundreds of years. Centuries. Have a gander. With the lack of inclusion, the world has sadly missed out on a lot. I'm happy that the lens is turning on inclusion now. But make no mistake, we were always there. Making amazing art. Picasso even knew that. I try to incorporate the Harlem Renaissance, Alain Locke, Jacob Lawrence, Archibald Motley, Augusta Savage,Aaron Douglas, Elizabeth Catlett, Charles White and all of those historical artists that paved the way. I stand on the shoulders of those giants. Black Lives always Mattered. Question is, who has to be told that?? I'm striving to find the hue of Humanity. The hue of Man-Kind.

Image credits from top to bottom:

An excellent interview. I really like Chaz Guest's work and was interested to learn more about him. I am now going to look up all the black artists he mentioned to learn about them.

The following sentence really impacted me:

Black Lives always Mattered. Question is, who has to be told that??

I fell asleep early at 9 pm, now awake at 1.37 am, so I'm going thru the NPG e-mail. The NPG is one of my most favorite places on earth - I love portraits, and I'm painting a small one now. Yes !! this is a beautifully written interview, by a very thoughtful young person and artist, and very thoughtful portraits . Are there actually gold coins on this portrait of Zahara ? I'm really enjoying these works, and the artists observations !!! I've always enjoyed the very early NPG portraits too - especially miniatures !! done in an era where the King had the power to cut someone's head off - even of a young girl !! Hard to imagine living at that time; so it's scary to see the best and realize the worst in humans - someone who sees and celebrated human kind, and someone who destroys it.

Beautifully written interview and very timely in these turbulent times. Zahara’s portrait and accompanying picture is beautiful, captivating, and powerful, showing, at the same time, the depth of her sweet nature.
Thank you for sharing this