New acquisitions in the sixteenth-century collection are relatively infrequent, so I was thrilled when the opportunity to purchase a portrait of Jane Seymour arose. Henry VIII’s third wife and the mother of Edward VI, Jane was previously only represented in the collection through posthumous engravings, the earliest of which dated to the mid-seventeenth century. She had married Henry only days after the execution of Anne Boleyn, taking the motto ‘Bound to obey and serve’, but tragically died shortly after giving birth to Prince Edward. The brevity of her reign likely accounts for the fact that few contemporary images of her survive.

Excitingly, the portrait that we were able to acquire is not only of interest for the sitter, but also for the unusual insight it provides into the workshop practice of one of the greatest portraitists ever to work in England – Hans Holbein the Younger. Jane sat for Holbein in 1536 or 1537 and his likeness of her survives in the form of a preparatory drawing (Royal Collection) and a finished painting (Kunsthistorisches Museum). Holbein’s portrait is the source for nearly all the surviving images of Jane; however, in this case research undertaken by Laura Hinde during her conservation treatment of the painting indicates that it is not simply a copy after Holbein, but likely came from his studio. The portrait is exactly the same scale as the painting in Vienna and dendrochronological analysis shows that the tree used to make the wooden panel support was felled in the 1530s. The preparatory underdrawing is very similar in style to that seen in a full-length portrait of Henry VIII attributed to Holbein’s studio (Walker Art Gallery, Liverpool), and the level of skill seen in the blending of the fleshtones and in the modelling and gilding of the geometric pattern in the curtain are highly unusual in works produced in England at this date. 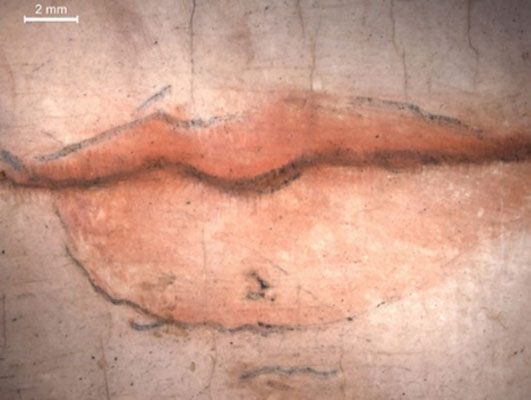 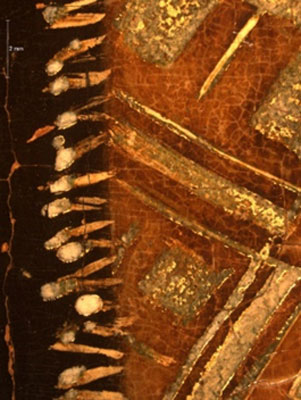 However, comparison with the portrait in Vienna reveals a number of curious differences in the composition, particularly in areas that would have been gilded or silvered, which seem to indicate that the painting was abandoned before it was finished. The sleeves and forepart are plain, with only an off-white mordant layer suggesting that a layer of silver was intended to be added, or has been lost; slight traces of silver remain in the fragmentary pattern of the sleeve on the left, and it is possible that the pattern was never completed on the right, leaving the exposed silver vulnerable to damage. The gilded areas in the jewels, sleeves and headdress are also absent, with only preparatory positions marked out in a very rough manner.

What could have caused the painting to be abandoned at such a late stage? We have no answers, only intriguing hypotheses as almost no documentary evidence survives relating to Holbein’s studio practice – did Jane’s death or the subsequent downfall of the Seymour family during the reign of Edward VI affect the commission? Or could this portrait indicate that the studio closed abruptly one day, leaving projects unfinished? Such an undoubtedly melodramatic interpretation is given an intriguing veneer of plausibility by Holbein’s sudden death in 1543– likely from plague.

Such a fascinating and informative project. I greatly look forward to seeing the portrait.

This is so exciting I long to read. More.

Very interesting. Do we know where it's been before?

I really enjoyed this piece, having been a huge admirer of Holbein since my BA days at UCL. I specialised in the Italian Renaissance but have also looked at the Northern version. I had the pleasure of meeting Charlotte and her French counterpart in 2015.