After celebrating the centenary of female suffrage in 2018, an increased number of female artists have appeared in the exhibitions schedules of several art museums. Behind the scenes, researchers are also doing their part to redress the gender imbalance in the art world by uncovering the lives and identities of women forgotten by history. This was the case with the rediscovery of the Baroness d’Erlanger Album, which was fully catalogued and digitised last year. In researching this single artefact, curators at the gallery were able to piece together a holistic portrait of Baroness Catherine d’Erlanger (1874-1959): a fascinating female figure affectionately named La Fiamma (the flame) for her red hair and large-than-life personality.

Born in France on 30 August 1874, Baroness Catherine d’Erlanger (née de Rochegude) prided herself on her aristocratic lineage, which she was able to trace back to the powerful Medici family in Renaissance Italy. Her ancestry would become more important during the Third Republic, when the Baroness and her husband emigrated to Great Britain. A photograph of the Baroness by Cecil Beaton (1904-1980) demonstrates the ways in which Renaissance imagery was used to solidify her noble status in British society [Fig. 1]. She is regally portrayed in profile and eccentrically holds a large shell: an object that was emblematic of the Renaissance curiosity cabinet for being exotic, precious and above all, beautiful. The shell would eventually become the Baroness’ trademark: a symbol of her aristocratic lineage and her power in society as a famously beautiful woman.

Once inaugurated into the upper echelons of British society, Baroness d’Erlanger became known for taking up-and-coming artists under her wing. In 1924, she organised an exhibition at the Alpine Club Gallery displaying paintings by Romaine Brooks (1874-1970), who subsequently painted a portrait of her in return [Fig. 2]. Her interests also spanned across media. For instance, she was an early supporter of Sergei Diaghilev (1872 – 1929) and the Ballet Russes. The Baroness d’Erlanger Album even shows a painting she created of the young songwriter Vivian Ellis (1903 – 1996). 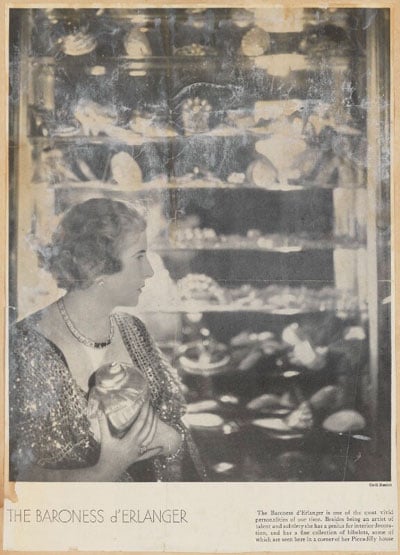 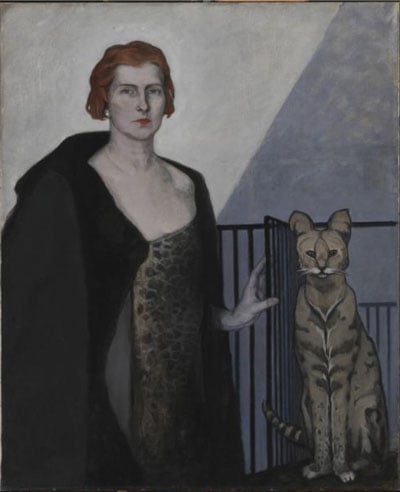 Baroness d’Erlanger would host her eclectic social circle – which included members of the British peerage, artists, writers and actors amongst others – in the various lavish properties she purchased throughout the early twentieth century. In 1910, the Baron and Baroness purchased 139 Piccadilly. The notable London property had been the home of Lord Byron (1788-1824) and Baroness d’Erlanger honoured its literary history by frequently hosting charitable poetry readings attended by the likes of William Butler Yeats (1865-1939) and Hilaire Belloc (1870-1953). Falconwood – their country home located at Shooter’s Hill in the Borough of Greenwich – was similarly enlivened by its visitors. The baroness would frequently host the promising young songwriter Cole Porter (1891-1964) and the drawing room at Falconwood was even painted by Sir John Lavery (1856-1941). Later in the 1920s, Baroness d’Erlanger would travel through Europe with her close friend Albert (‘Bertie’) Clinton Landsberg (1889-1965) to retrace a journey made by Lord Byron in the nineteenth century. In 1925, she came across her most magnificent property: La Malcontenta. This sixteenth-century Palladian villa on the outskirts of Venice had been inhabited by Lord Byron in 1821. Together with close friends, including the notable stage designer Oliver Messel (1904-1978), she was able to restore the sixteenth century frescoes that once decorated the villa interior [Fig. 4]. and host numerous important figures, such as the future British Prime Minister Sir Winston Churchill (1874-1965), the ballet dancer Serge Lifar (1905-1986) and the French author Paul Morand (1888-1976). 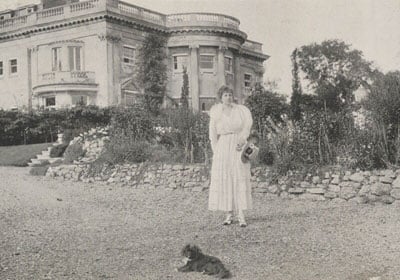 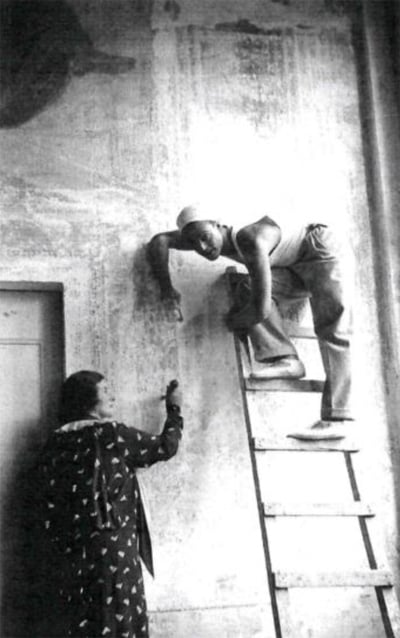 After the declaration of World War Two in 1939, Baroness d’Erlanger fled to America. She would eventually settle in Beverly Hills in Los Angeles where she chose to be neighbours with her close friend Igor Stravinksy (1882-1971). Even though she was now in her sixties, the Baroness was no less prolific. She quickly gained a scandalous reputation for opening the Café Gala in 1941 with her friend John Walsh, which openly catered to queer clientele alongside Hollywood celebrities, such as Greta Garbo (1905-1990), Judy Garland (1922-1969) and Sylvia Fairbanks (1904-1977). The Baroness was also an enthusiastic amateur artist. She had exhibited her work at the Claridge Gallery in London before and now she was exhibiting her paintings in various Los Angeles galleries, such as the Vysekal Studio Gallery on Sunset Boulevard. Praised for their ‘completely likeable simplicity’, the subjects of the Baroness’s paintings were the members of her social circle [Fig. 5]. With her family living in Europe and helping with the war effort, Jean Howard’s photograph of the Baroness with her paintings shows how she maintained the presence of her adopted family (her friends) in her home. Baroness d’Erlanger would only return to Europe in 1948, where she would eventually be buried in the place she was raised – Château de Rochegude, France in December 1959. 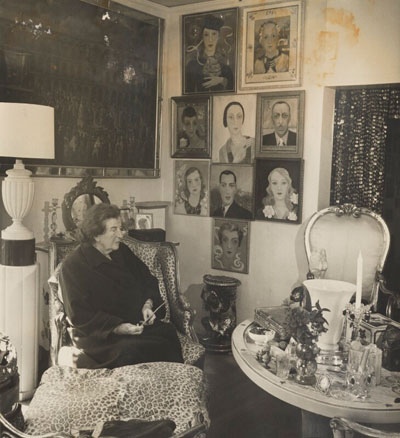 What makes the Baroness d’Erlanger Album so compelling is that it is compiled of photographs, drawings, newspaper cuttings and more that detail the Baroness’ life from infancy to her years in Los Angeles. The album therefore captures the many facets of the Baroness’s identity – society hostess, prolific philanthropist and amateur artist – within a single artefact. According to Thomas Carlyle (1795-1881), whose writing greatly influenced the foundation of the National Portrait Gallery, portraiture is ‘a small lighted candle by which [a] biography [can] for the first time be read’. The Baroness d’Erlanger Album achieves this quite literally and it is for this reason that it has become an invaluable asset to the National Portrait Gallery. Not only has it ignited further research into Baroness Catherine d’Erlanger herself but also into the cultural milieu with which she surrounded herself. In other words, her story is one that transgresses the confines of a single album. It is even difficult to summarize her many achievements and passions within a single article. And yet by all accounts the research conducted so far at the National Portrait Gallery indicates that her story is one that should be remembered.

At this moment standing on the site of Falconwood House. Still finding remnants and artifacts from the time of this remarkable era and Women. Plus the added bonus of Enid Bagnold's former home next door.

Thank you so much for making this information available. I found this after looking into her daughter Baba. Fantastic that the NPG realizes this is worth further time and understanding.

Your research sounds fascinating! I would definitely be open to hearing more about it - please feel free to email me at [email protected].

Great that Baroness d'Erlanger's photo album has been catalogued and referenced. She belongs to a community of cosmopolitan art-lovers and patrons of the avant-garde whose influence has not yet been fully recognised. I am currently researching the life and times of Catherine's brother-in-law, the artist and ethno-musicologist Baron Rodolphe d'Erlanger. Between 1910 and 1922, he built the Ennejma Ezzahra Palace in Sidi Bou Said Tunisia, which Catherine visited in the early 1920s. Very happy to share more information if you are interested.

Thank you so much for your lovely comments.

I spent six months researching this extensive album and, in my mind, the research is not yet complete! There are various interesting avenues one could pursue in studying the album, such as the inclusion of work by female photographers (as Terence mentioned) and sourcing the portraits painted by the baroness.

I would definitely jump at the chance to research the album and Baroness d'Erlanger further in the future!

How fantastic and informative this was to read! I especially enjoyed learning about the significance of the shell in D'Erlanger's representation and her role as an artist. Have you any further plans to write more?

This is such a wonderful account of the artistic life of collector, interior designer and patron of the arts Baroness D’Erlanger who deserves to be better known. although somewhat damaged the surviving album of photographs press cuttings and original watercolours and reproductions of paintings has been extensively researched and catalogued for the first time and will hopefully become better known and possibly the subject of a future display. Delighted to see further research has revealed it also contains work by two important women photographers Miss Compton Collier and American screen personality Jean Howard who is now represented for first time in NPG Collection