Marilyn Monroe – the British connection
Why does her image endure?

The gallery has been offered a number of touring exhibitions commemorating the life and career of Marilyn Monroe. With the fiftieth anniversary of her death approaching we decided we would generate our own display, more appropriate for the National Portrait Gallery, celebrating the star’s British connections. Although Monroe was an American actress, she was of course, a hugely popular international star and she had been photographed in New York in 1956 by one of the most celebrated British photographers of the twentieth century, Cecil Beaton.

A selection of the Beaton portraits forms a key part of the display, which brings together over fifty further rarely seen vintage prints, film stills and magazines that celebrate Monroe’s life and work. 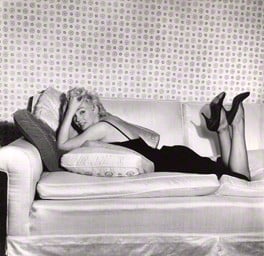 As we began our research we found Monroe’s connections to Britain to be more numerous than we had originally thought. We identified other British photographers who had captured her strikingly photogenic looks, including society portraitist Antony Beauchamp and Baron, photographer of ballet dancers, the royal family and beautiful women. Both had photographed the star in Hollywood.

A trip to see the film adaptation of Colin Clark’s book My Week with Marilyn characterized another aspect we would address: Monroe’s one and only visit to the UK for the filming of The Prince and the Showgirl. Between Monroe’s arrival at Heathrow on 14 July 1956 and her departure on 20 November, the British press followed Monroe as much as was possible. 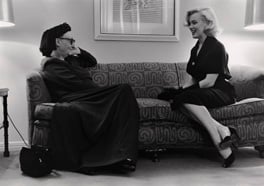 My colleagues’ visit to archives of Life magazine in New York resulted in the inclusion of two less well-known images of the star, taken by Larry Burrows at the Savoy Hotel press conference to announce the beginning of Monroe and Olivier’s collaboration. Another Burrows image of children waiting for Monroe to emerge from behind the gates of Parkside House, Surrey, where she stayed whilst filming at Pinewood also emerged. Life magazine contributed George Silk’s photograph of Monroe sitting on a sofa, engaged in conversation with the poet Edith Sitwell. The pair, meeting in January 1953, during Sitwell’s visit to Hollywood, got on very well, talking about the work of Rudolf Steiner, which Monroe was reading. 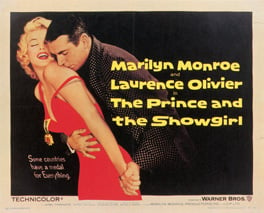 The Prince and The Showgirl generated a large amount publicity material and for the display we were lent an original poster as well as lobby cards and film stills. We got in touch with the family of British director Roy Ward Baker, who had worked with Monroe in 1952 on Don’t Bother to Knock, in which she starred, contrary to stereotype, in a serious acting role.

We have also included twenty British magazines, which demonstrate Monroe’s huge appeal as cover star to sell magazines, some of which inspired British pop artists such as Peter Blake, Richard Hamilton and Pauline Boty to create iconic artworks. Today, fifty years after Monroe’s death, we hope that this celebration of the Hollywood star’s British connections provides a fitting tribute to her life and helps to explore why her image still remains so powerful.

As part of the display Marilyn Monroe: A British Love Affair

Poster for The Prince and The Showgirl, 1957, courtesy Lloyd Ibert Collection

Lovely exhibit Even dedicated a blog post to it :-)

Yes the "Died Too Young" group is sadly added to all too often..it is strange that Princess Diana and Monroe, linked in the same Bernie Taupin-Elton John song, both died at the same age...I imagine there are currently more books on Monroe than Diana and will that always be the case..?...though both remain in the "world's most photographed" category..and the other Royal Connection is Marilyn's birth year being shared with Queen Elizabeth 2nd, the short term near neighbours during the making of Prince and the Showgirl..

Monroe's reception in the UK both during her visit here in 1956 and printed media is very engaging and explanatory, when what we know of Monroe is the legend. It was indeed a joy to see how that legend came into being and how Monroe's celebrity was played out in the UK and to a British audience.

I too love the image of Monroe doing a headstand on the beach, but hadn't made the yoga link, how interesting. Monroe was concerned with fitness and at ease with her physicality, I think this is evident in Beauchamp's photographs.

That the photograph of children waiting for Monroe to appear at the gates of Parkside House has captured the audience's imagination is telling perhaps of the compassion of the photographer of this image, Larry Burrows, a British photojournalist best known for his coverage of the Vietnam War.

What an engaging and fascinating exhibition! Seeing little known photos of Marilyn Monroe was wonderful - but I particularly enjoyed the way in which the show allowed one to experience how she was received at the time in the UK. The photographs of her fans, as others have commented, are moving and the generous array of magazines also gave access to the fans’ mediated experience. Gazing at the design, choice of image, the captions and so on, made what are now half-century old events feel very vivid to me. British Pop artists were, of course, responding to these mediated images, which is where the exhibition so effectively leads, most notably to Pauline Boty - a beautiful, sexy, intelligent woman artist identifying with and painting Monroe, the ultimate icon of vulnerable female sexuality. Pauline Boty was devastated by Monroe’s death and expressed her grief in “Colour Her Gone”, a splendid, large painting that, as, the exhibition demonstrates, is based on an image from a cover of “Town” magazine.

This exhibition is lovely and I'm so lucky that it's in the town I live in, so I can pop along several more times! Having been a fan of Marilyn for around 25 years, it isn't often that I see photographs of her that I have never seen before - however, the image of her in a headstand on the beach, taken by Antony Beauchamp, was very exciting for me to see. Marilyn was a yoga practitioner, taught by Indra Devi who also taught Greta Garbo and other Hollywood legends, yet there aren't many photographs of Marilyn in poses, so this was a special one for me to see.

I also completely agree with Michelle that the picture of the children waiting at the gate of Parkside House is wonderful and really conveys how much she was loved at the time. Given she has been a part of popular culture for so long, and her image so immortalised, thinking of her as a real living breathing human being is frequently overlooked, yet this simple photograph demonstrates how she touched the lives of her audience in a very real way.

Many thanks to the curators for a uniquely British look at Marilyn Monroe!

I was absolutely thrilled to see the exhibition celebrating Marilyn's association with England. In fact it thrilled me for several reasons - 1) I have been a fan since 1985 and have always been fascinated by her trip to England, and 2) I had the absolute pleasure of speaking at the gallery on the very subject of Marilyn and her trip to England in 1956. The talk gave me an opportunity to share with everyone what I had found about her time in England, and to remember the interesting and often entertaining stories I had been told during my research.

After the talk I had the pleasure of visiting the exhibition and can honestly say that I found it to be really beautiful. The lovely thing about it is that while it has photographs of Marilyn in England, it also has pictures and magazines that are linked to her by other English associations, such as publications produced here; co-stars born here; directors who lived here etc. etc.

I loved seeing the photographs in the exhibition and one that I loved particularly doesn't actually have Marilyn in it, but just says everything about her trip to Surrey... It is a shot of the gates to Parkside House where she lived, and it is literally covered with children and other fans, trying desperately to peek into Marilyn's garden. There is a sign outside saying that the actress will not be out until later that day, but that has not stopped the fans from literally hanging there anyway. This to me sums up everything I have found about her trip. She was so loved by the fans and local people and made friends here in very unexpected ways. This photo demonstrates that for me and I'm so glad it was chosen as part of the exhibition.

I must congratulate the National Portrait Gallery on the stunning exhibition. I was surrounded by Marilyn fans when I visited, and I know they all felt the same way as me - we loved it!!

Early deaths of exceptionally talented individuals in the media spotlight, such as Monroe, or James Dean before her or Jimi Hendrix after her, often seals their legendary status, with our perception of them frozen in time. Wishing to keep their spirit alive, when their candle has - to cite Bernie Taupin's lyrics - burned out long before, helps explain why their image endures.