Meet the King and Queen and their ‘Principalle Paynter’

The story of Sir Anthony van Dyck’s meteoric rise to fame in Britain would be incomplete without reference to his foremost patrons, King Charles I and his French queen, Henrietta Maria. King Charles was one of the most knowledgeable and enthusiastic patrons and collectors of art of all British monarchs. Having finally enticed the internationally-famous artist into the country in 1632, and hoping that van Dyck might establish his home and studio in London thereafter, the King immediately began commissioning portraits of himself and his family from the artist, and showered him with favours. 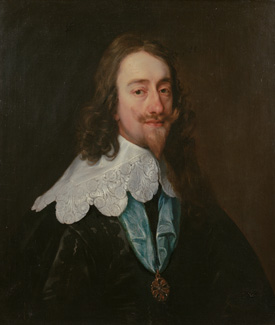 King Charles I by Sir Anthony van Dyck, c. 1636 © By kind permission of the Chequers Trust 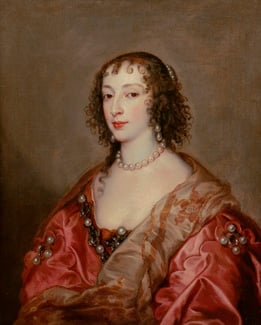 Queen Henrietta Maria by Sir Anthony van Dyck, c1636 © By kind permission of the Chequers Trust with support from the Chiltern Decorative and Fine Art Society

Van Dyck was given the special new title of ‘principalle Paynter in Ordinary to their Majesties’, along with an enormous annual salary of £200, a gold chain, and a large house with a garden on the water at Blackfriars, as well as a suite of rooms at the Royal Palace of Eltham in Kent.  The King even had a landing stage built on the river entrance of van Dyck’s Blackfriars property so that he might easily drop in by boat and view van Dyck’s paintings and his impressive art collection.  But, perhaps the most telling accolade accorded to the painter is that, two months after his arrival in the country, the King bestowed van Dyck with a knighthood,  making him only the second artist in Britain to have received such an honour (the other being the similarly internationally famous artist and former artistic collaborator, Sir Peter Paul Rubens).  Such honours van Dyck could not refuse and, but for some suspended forays abroad, he kept London as his base until his early death in 1641. 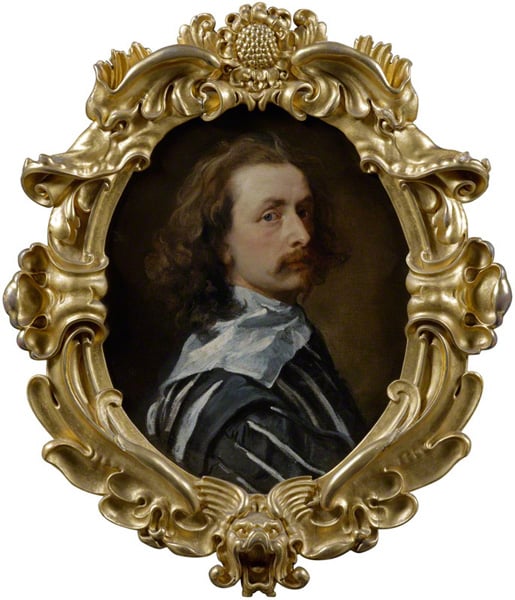 It comes as no surprise, therefore, that portraits of the King and Queen were high on our wishlist list when making the object selection for the current display ‘Van Dyck: Transforming British Art’. This is the first of three annual displays to be held at the Gallery as part of the HLF-funded three-year tour of the newly-acquired van Dyck Self-portrait, thought to have been painted at the very end of his career. However, while we had hit the jackpot in terms of owning a self-portrait by undoubtedly the most influential artist working in Britain in the seventeenth century, the Gallery only possesses copies of van Dyck portraits of the King and Queen, and we were in need of a portrait of the King which featured the master’s own hand. We were therefore delighted to discover that it would be possible to borrow a portrait of the King and his Queen from the Prime Minister’s country residence, Chequers, in Buckinghamshire. For obvious reasons, Chequers isn’t open to the public, but the Chequers Trust’s generous agreement to lend the paintings to the National Portrait Gallery offers a rare occasion to see the portraits. 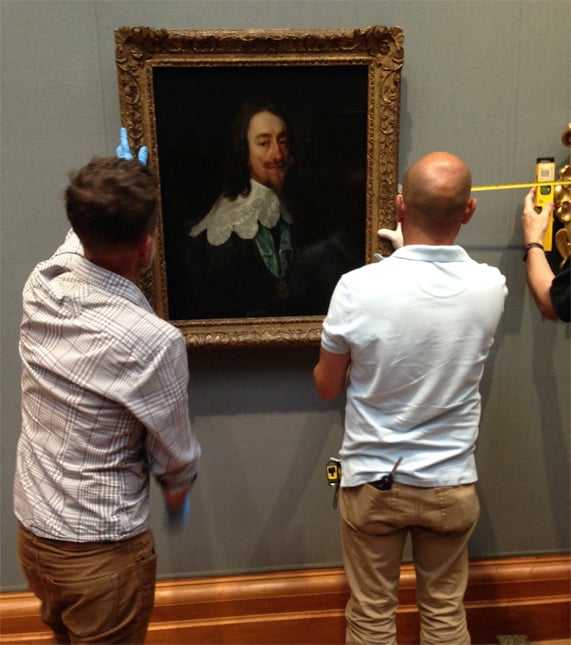 Here’s a sneaky action shot of the Charles I being carefully hung on the wall for the display by three of the Gallery’s art handlers.

The portraits were not made as a pair, but they are of a similar size and complement each other well. The Chequers portrait of Charles I (oil on canvas c.1636) is a sensitive head of the king, paintedby van Dyck’s own hand. It is thought to have been kept by van Dyck in his studio as a model for other, larger works, and  the costume was probably added later by studio assistants. The portrait of Henrietta Maria (oil on canvas, c.1636) is perhaps entirely by van Dyck himself.  The queen sat a number of times for the artist – both she and the king were pleased by his talent for flattering the sitter.  One anecdote which best relays this is the account of Charles’s niece, Sophia of Hanover who, having seen the  ‘beautiful’ van Dyck portraits, recalled of her first sight of Henrietta Maria in 1641: ‘I was surprised to find that the Queen ... was a small woman ... with long skinny arms and teeth like defence works projecting from her mouth.’  I think you will all agree that van Dyck has certainly made her look stylish and attractive in the Chequers portrait!

The portraits have been hung in pride of place flanking the Gallery’s own van Dyck self-portrait, and I hope you will come and visit the country’s first Principal Painter reunited with his proud patrons while the window of opportunity exists.

Very interesting article, there is no mention of the most influential artist working in Britain in the seventeenth century at Eltham Palace. Did he paint Eltham Palace?

Amazing, truly amazing. I have spent two long years viewing Portraits of Charles 1, 1600-1649, I have searched far and wide for any forms of miniature Relief Portrait Medallions or Wax Portraits of the King without success. The book Wedgewood , the Portrait Medallions by Robin Reilly and George Savage clearly state (Pg 88)References. 1788 Catalogue (Charles 1) Mould (double portrait only). Charles 1 and Henrietta Maria was copied from a medal by Roettiers.
No example of the portrait of Charles 1 has been located; nor does there appear to be a mould at Barlaston. is this true to date or can it be that I hold the only example and the original Mould of the Portrait of King Charles 1 ,1600-1649?

I found a massive oil painting of Queen Henrietta Maria dated 163? It was relined a extremely long time ago. Needs restoration and you can see her highly detailed lace and she is holding a flower. Dated up right. Her crown is on the table to her side.
Painting is very dark but her pearls and lace and face are stunning.