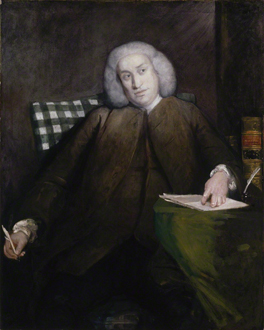 This article is an extract from the exclusive Gallery Supporters’ magazine Face to Face. To learn more about supporting the National Portrait Gallery, please visit: www.npg.org.uk/support/individual/

There is often a price paid for brilliance, and in this portrait of Dr Samuel Johnson, Joshua Reynolds forces us to reflect on what the nature of that price might be. In an age before psychoanalysis, Reynolds deploys painting techniques shaped and honed on his travels in Europe to delve into the inner landscape of one of the great minds of mid-eighteenth-century London. While it is a carefully crafted examination of how the light from a single window reaches gingerly into Dr Johnson’s study to lift his gaze, what is revealed is not just a returned stare, but something more. Johnson looks back towards the light, out through the window, not at a particular object, but to something beyond the horizon; what is laid bare is the inner man.

The painting was made in the mid-1750s when Reynolds was at his most experimental and Johnson had just completed his Dictionary of the English Language. It was a period when burgeoning developments in science, art and philosophy were reshaping ideas of what might be possible. And these two friends – painter and subject – dominated their respective disciplines. The obvious closeness of these two great figures, and their shared understanding of the potential of the moment that they were living through, contribute to making the image particularly special. It is not just a portrait of a single man, but also of an existential shift, of a period of fundamental change. These are men who are part of a generation prepared to think ambitiously and return the stare of infinity.

But somehow what these dark eyes reflect is not the ambient confidence of the Enlightenment. There is a frailty, an ambivalence. Johnson’s right hand barely grips the quill, the sinews of his left hand seem to be tautening. He is both assured and yet modestly questioning. You can imagine him, brilliant, eloquent and inspirational, but you might also discern a man who has suffered from bouts of crippling depression and self-doubt. This is not a portrait of a blindly driven man. It is the moment of reflective inspiration of the diffident genius. Johnson is, if anything, vulnerable, reflecting falteringly, almost wistfully, on what might be. Reynolds so obviously understood that, and saw that fragility as something to respect. The challenges of the age were not to be met with arrogance, but by measured reflection.

In 1789, after decades of living with it, Reynolds gave the still unfinished painting to Boswell, Johnson’s biographer, and it became the basis of the frontispiece for Boswell’s study of the great lexicographer. Even in its unfinished state, it said something about Johnson that no other portrait did. And it also said something interesting about the age. But even today, as an essay on the psychological costs of ambition, it is a thought-provoking image that continues to be affecting.

Perhaps you are right Caroline – I see him as a wonderful contradictory analogue of the enlightenment period - loud, brash, anal and deeply controlling, (as you so rightly say) but simultaneously hiding deep doubt and diffidence. I have always thought the energy of the eighteenth century came from a Johnson-like manic vacillation of mood and attitude. There was our national need to curate and control a world that was changing quickly that sat in a tension with a deeply acculturated reserve and self-doubt. Although we sought almost pathologically to control the international sphere, we also avidly invited the world’s artists, musicians, thinkers to Britain to learn from them. I feel that what we see in this painting is the questioning interior - perhaps our better self?

Thanks so much for this. I've always thought of Dr Johnson as a stuffy plump fellow, bustling around being didactic about his definitions, maybe even exploiting Bosworth-as-drone. How wrong I was!