11 June 2015 marks the bicentenary of the birth of Julia Margaret Cameron (1815-79). Considered to be one of the most important and innovative photographers in the history of the medium, Cameron took up photography relatively late in life after being given a camera by her daughter Julia and her husband, Charles Norman, in late 1863. She inventively used the glazed fowl-house at her home ‘Dimbola’ in Freshwater on the Isle of Wight as her studio and went on to set up a dark-room in the coal-house.

Her works are among the most popular in the National Portrait Gallery’s photographic collections, embodying a distinctive fine art style at a time when commercial studios dictated the dominant aesthetic for photographic portraiture. These include over 100 portraits ranging from large-format albumen prints of eminent men from her social circle to photographs from her series of illustrations (1874) for Lord Alfred Tennyson’s Idylls of the King, smaller and more accessible cartes-de-visite and cabinet cards used to make her work more widely known and photogravures published posthumously in a limited edition volume of Lord Tennyson and his Friends (1893) (the Gallery notably holds the first edition).

Added to these, the Gallery is also the repository for a number of letters in its Collected Archives between Cameron and her friend the artist George Frederic Watts (1817-1904). Catalogued in 2014, they reveal Watts’s position as Cameron’s artistic mentor as he critiqued or praised the photographs she sent to him. He also encouraged her to seek the influence of David Wilkie Wynfield’s photographs, of which the National Portrait Gallery also holds many.

Within these letters, Cameron’s fascinating attempts to persuade Watts to paint the civil servant and writer Sir Henry Taylor (1800-86) for his ‘Hall of Fame’ series are also shown. She wrote:

Dear Signor, I send you a rhymed Letter! which is a sort of running Biography to persuade you, that you who have so often told me of the high respect you have for work, should honour the Practical Poet [Taylor] and do him immortal honour - even as you have done immortal honour to our contemplative poet [Tennyson] [...] [F]ulfil your reiterated intention & paint for your gallery of great men this great head - won’t you? (3 December 1860)

Cameron and Taylor first met as neighbours in Tunbridge Wells in Kent and became life-long friends. Taylor was a frequent visitor to ‘Dimbola’, which he described as “a house, indeed, to which everybody resorted at pleasure, and in which no man, woman or child was ever known to be unwelcome” (Sir Henry Taylor, Autobiography, p. 184), and Cameron became an ardent proponent of Taylor’s work. She photographed him on several occasions between 1864 and 1867 as himself and in costume as various biblical and literary characters, including Shakespearean roles such as Friar Laurence from Romeo and Juliet, Prospero from The Tempest and as King Lear (all 1865). She also depicted Taylor’s characters Floss and Iolande from his play St Clement’s Eve in 1864. Taylor eventually sat for Watts in around 1868 and the resulting portrait was donated to the National Portrait Gallery by the artist in 1895.

Watt’s portrait of Cameron can be seen in Room 28 at the National Portrait Gallery. A further selection of Watts’s ‘Hall of Fame’ paintings are currently on display in Room 26 and at the Gallery’s regional partner Bodelwyddan Castle.

To see other interesting works by Julia Margaret Cameron visit our slideshow on 'Poets, prophets, painters and lovely maidens' here. 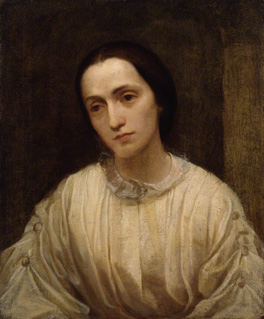 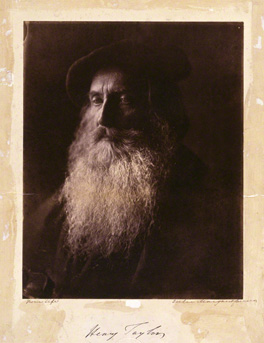 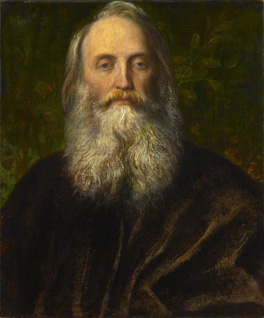 Image credits from left to right