Picture the Poet kicks off in Norwich 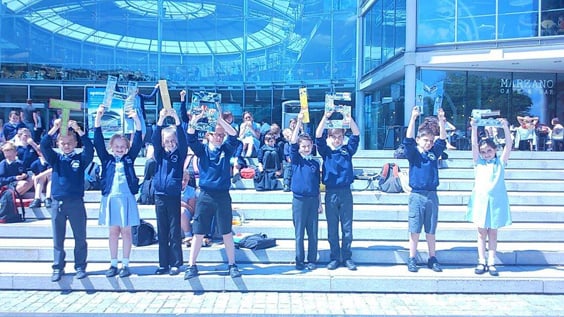 After a year in the making, Picture the Poet has taken to the road – a touring exhibition of photographic portraits from the National Portrait Gallery’s Collection that will travel across the country engaging regional audiences, schools, young poets and photographers in the making.

With a wholly digital display in Norwich as the first destination, this month over fifty portraits have been seen in the city centre and a raft of school and young people’s activities has been announced.  Crucial to this programme are the partnerships with the National Literacy Trust and poetry organisation Apples and Snakes. It’s been a great start, with over thirty schools showing an appetite to join in. Poetry is now centre stage in schools thanks to new curriculum guidance and the Picture the Poet programme has carefully interwoven the portraiture of living poets with a wrap-around creative poetry activity designed for teachers and pupils.

There’s no better way to explore poetry than to get hands-on, and no sooner had the exhibition launched than twenty-five nervous but excited teachers spent a day with the National Literacy Trust and performance poet Francesca Beard. They were able to grips with spoken word, writing and performing poems of their own and planning super-charged projects for their pupils at school. Most had never experienced poetry in this way, and all found their way into writing through a range of games and playful techniques.

It’s still only a few weeks into the exhibition in Norwich and schools have seized the opportunity for poetry activities, creating books and displays, and running with the theme of identity and ‘This is Me’. Teachers returning to the gallery with their pupils have taken part in library sessions and have been able to book into specially facilitated recording studio sessions with the BBC to record their poems. From the raw to the humorous to the beautiful, these poems will be uploaded to the Picture the Poet website in the coming month.

Photography workshops and spoken word sessions with young people have also formed a crucial part of the programme, which will culminate in a live performance by acclaimed performance poets alongside the participants in the gallery on 20 June.

From Norwich, the exhibition moves to Sheffield before moving on to four other regions over the coming year – it’s a growing partnership and a growing programme.

Image Credits from top to bottom