In 1974 the Gallery acquired a set of sixteen portraits of English kings and queens from William the Conqueror to Mary I. The set came from the collection of the Duke of Leeds at Hornby Castle, Yorkshire and was probably painted in the late sixteenth or early seventeenth century. Although rather comical in appearance due to the crude designs on which they were based and the relative lack of skill of the painters, the Hornby Castle portraits are nevertheless an important survival. Portrait sets of historical figures became popular in England during the reign of Elizabeth I when they were primarily used to decorate long galleries. They reflected a widespread cultural interest in the nation’s history and conveyed important messages about the interests, status and loyalties of their owners.

The Hornby Castle set of kings and queens was the starting point for my doctoral research on ‘Portrait Sets in Tudor and Jacobean England’ (University of Sussex, 2011-14). Working in collaboration with the Gallery as part of the ‘Making Art in Tudor Britain’ project, I was able to study the set closely in the conservation studio and make use of the Gallery’s other resources including the Heinz archive, comparative paintings and prints, and staff expertise.

Most portraits in Elizabethan and Jacobean sets were based on pre-existing paintings or graphic sources. My analysis of the sources used for the Hornby Castle portraits, combined with information gathered from technical analysis, provided a date range of 1597-1618 for the set. This corresponds with other sets of this type, including kings and queens at Dulwich Picture Gallery, Ripon Deanery and the Royal Collection, all of which date from the period 1580-1620. The fashion for painted sets seems to have been relatively widespread during this period and it is probable that many have been dispersed or destroyed. The few sets that survive therefore provide us with an important insight into this particular category of painting.

The Hornby Castle set of kings and queens is currently on display in Room 1. For more information on the recent findings see here. 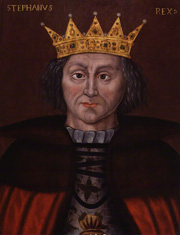 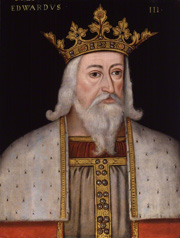 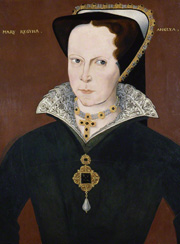 Image Credits from left to right