Recently we caught up with opera singer, BBC broadcaster and mastermind behind the Rediscovering Black Portraiture project, Peter Brathwaite.

Could you tell us about the project? What inspired you to take part?

The Getty Museum set a challenge for people across social media to recreate their favourite pieces of art using only what they had in their homes. I'd seen that this had been going on for a few weeks, it was the week before Easter that I decided to take the plunge and do one myself.

I’d been carrying out some family tree research at the start of lockdown, continuing from work that I had done before – it was providing a good distraction from the news, cancelled work, and postponed jobs.

Something that became apparent during my research was that although I had found portraits of white ancestors I hadn't encountered any images of my black ancestors from the 1700s and the 1800s.  I was fantasising about how I could create images for them and honour their memory in a more creative way than just writing names into a family tree. I did my first one on Good Friday, Black Servant, England. Unknown artist (1760-1770). I then set myself the challenge of doing one every single day for 50 days. It was an unbroken line of recreations until I got to 50.

I realised that as well as being a very personal journey for me, about my family history and giving my black ancestors portraits, it became more of an educational project too, for both myself and for audiences on social media. It offered the opportunity to learn about marginalised art and consider issues of representation and the narratives that are told. 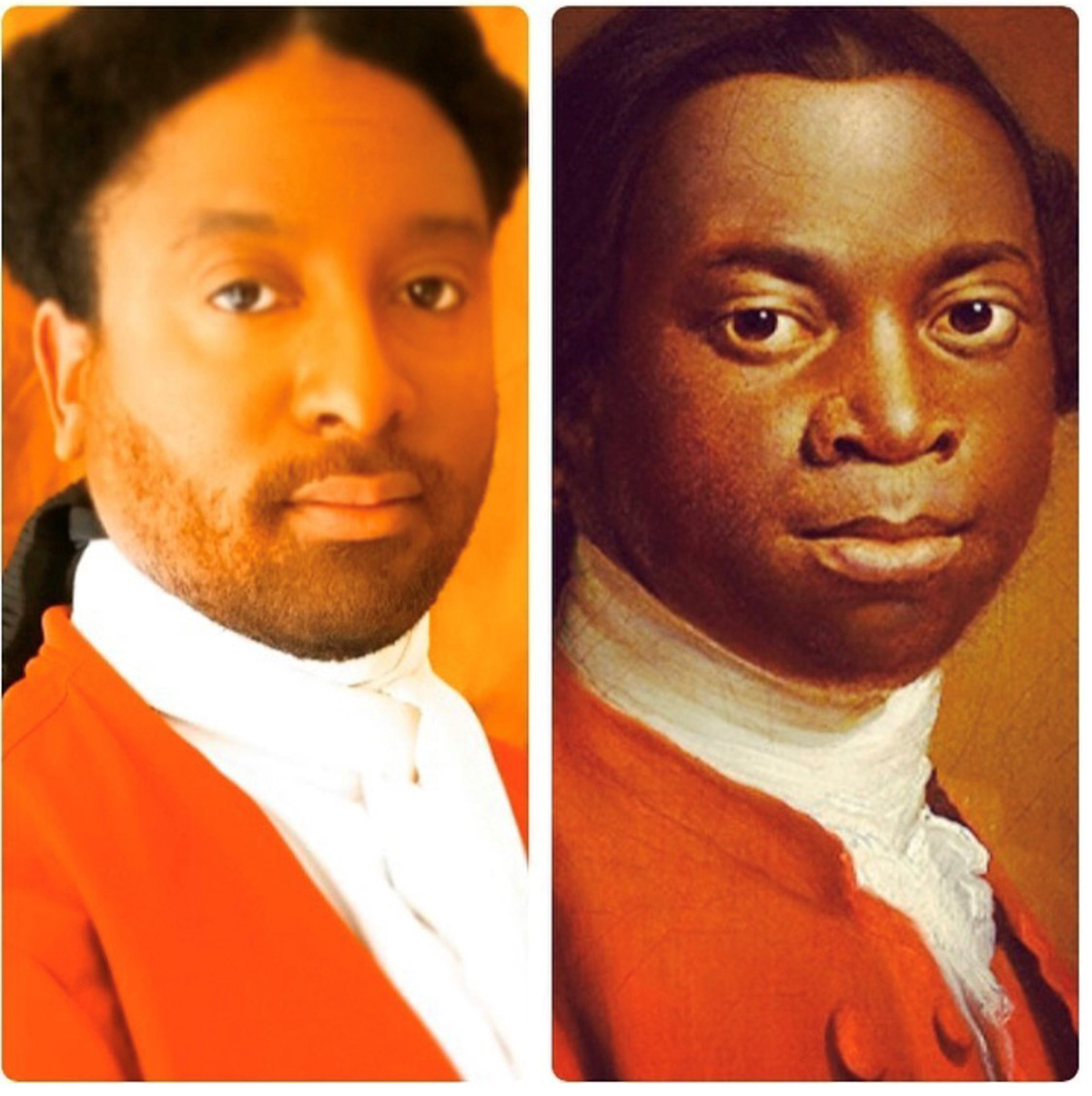 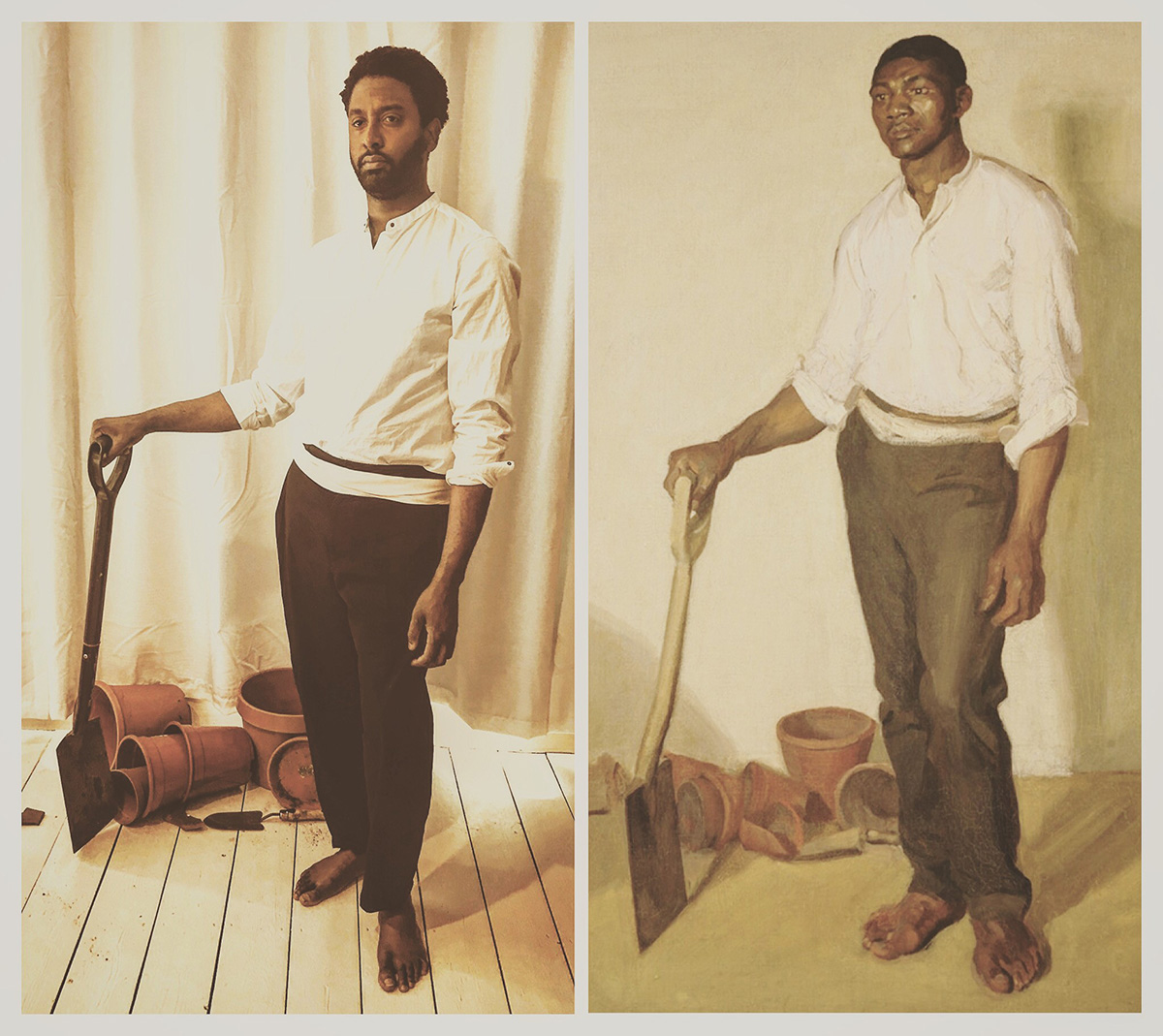 Portrait of a Black Gardener by Harold Gilman, c.1905. The Garden Museum, London

It’s generated stimulating conversations on social media, with people suggesting paintings I wasn’t aware of, helping me on my mission to keep going.  It's a project I'm passionate about, in the same way I'm passionate about performing music that has been marginalised. A lot of the work I do alongside being an opera singer is performing the works of composers that have been banned or suppressed, and haven't had their voices heard or have had their artistic output cut short as a result of censorship. This project feels like it goes hand in hand with that, in some ways it feels like a visual representation of that work.

How did the process unfold for you? Did you come-up against any challenges? If so, what were they?

You just have to know where to look for these paintings. I’ve been using a combination of blogs, gallery websites and books. One book that I've been using is The Image of the Black in Western Art.  It is a series of volumes, of which I have one, this has proved hugely helpful in looking at 18th century paintings.

I’d like to think that the project feels like an accessible route into discovering marginalised art, especially because it combines humour with history. The goal is always to help people to access a different, difficult history that maybe they would not have necessarily accessed before.

I assumed that the majority of paintings that I would find would be master-slave or master-servant type imagery, so I was surprised with my initial searches. However, once I exhausted that initial list I did encounter difficulties. This is when all of the other problematic aspects of representation within art, for example cataloguing, came to the forefront. It was often difficult to locate paintings, and often they were listed alongside derogatory terms – still – you’d be surprised by what I had to put into a search engine to locate some images. Frequently it was the case that the black sitters were not originally labelled at all, especially if they appeared in a painting with white sitters, regularly only that person was noted. It calls into question certain issues, how do we label art and talk about it? Moreover, how do we confront difficult histories, particularly against a backdrop of whitewashing?

The more I researched, and the more I recreated, the more I began to uncover the systemic injustices present in art. It is an important conversation to have. Art is where we learn so much about culture and ourselves, and the difficulties I encountered speak to this moment, where Black Lives Matter has taken on such momentum.

The goal is always to help people to access a different, difficult history that maybe they would not have necessarily accessed before.

A part of the Getty Challenge is to cleverly utilise objects found in the home – what factors did you consider when choosing your objects?

I was keen to bring in some family objects that had been handed down to me, a patchwork quilt and a cooking instrument called a cou cou stick from my Grandparents. The latter is used during the preparation of the Barbados’ national dish, cou cou served with flying fish. Cou cou is made from ground cornmeal and okra and is a dish I have eaten at home since I was a child. The quilt represents the tradition of quilt making amongst Bajan women that dates back to the period of enslavement. Women made quilts to comfort their families, using shards of fabric that they had available to them around the home.

The “make-do” aspect of the Getty Challenge really resonated with me, as it felt like an opportunity to layer the project. I like that many of the original paintings include lavish items. Subverting them with humble objects is a way of creating a connection with the sitter – you suddenly don’t feel so far away from the historical figures you’re trying to recreate. Such additions also spark a dialogue that speaks to our shared history. What does this history mean? How can we connect with it and speak to the past as well as the future? How can we decolonise and reclaim a space, so sitters that were once powerless are given agency?

I noticed in earlier portraits black sitters, often young boys, were depicted alongside expensive commodities such as glass. Such juxtapositions were often used to not only ‘exoticise’ the black sitter, but to also commodify them, and reinforce their enslaved status. I endeavoured to give each sitter a personality, whether through the inclusion of similar objects or through another aspect of the recreation. For example, I often incorporated West African fabrics in replace of European clothing – this inclusion felt like a celebration of their identity and moved away from their original objectified status.

Are there any portraits that have stood out to you in particular?

I would have to say the The Paston Treasures from Norwich Castle Museum & Art Gallery. This work vibrates with me in a very personal way. Given it’s full of music – scores and various instruments – I was able to put a lot of myself in to the recreation. I replaced gold and silver items with plastic ones, included favourite pieces of music, foodstuffs, and the globe with a personal heirloom – a suitcase that my family brought with them when they first came to the U.K. Again, it allowed me to think about the interplay between Black British identity and colonialism. 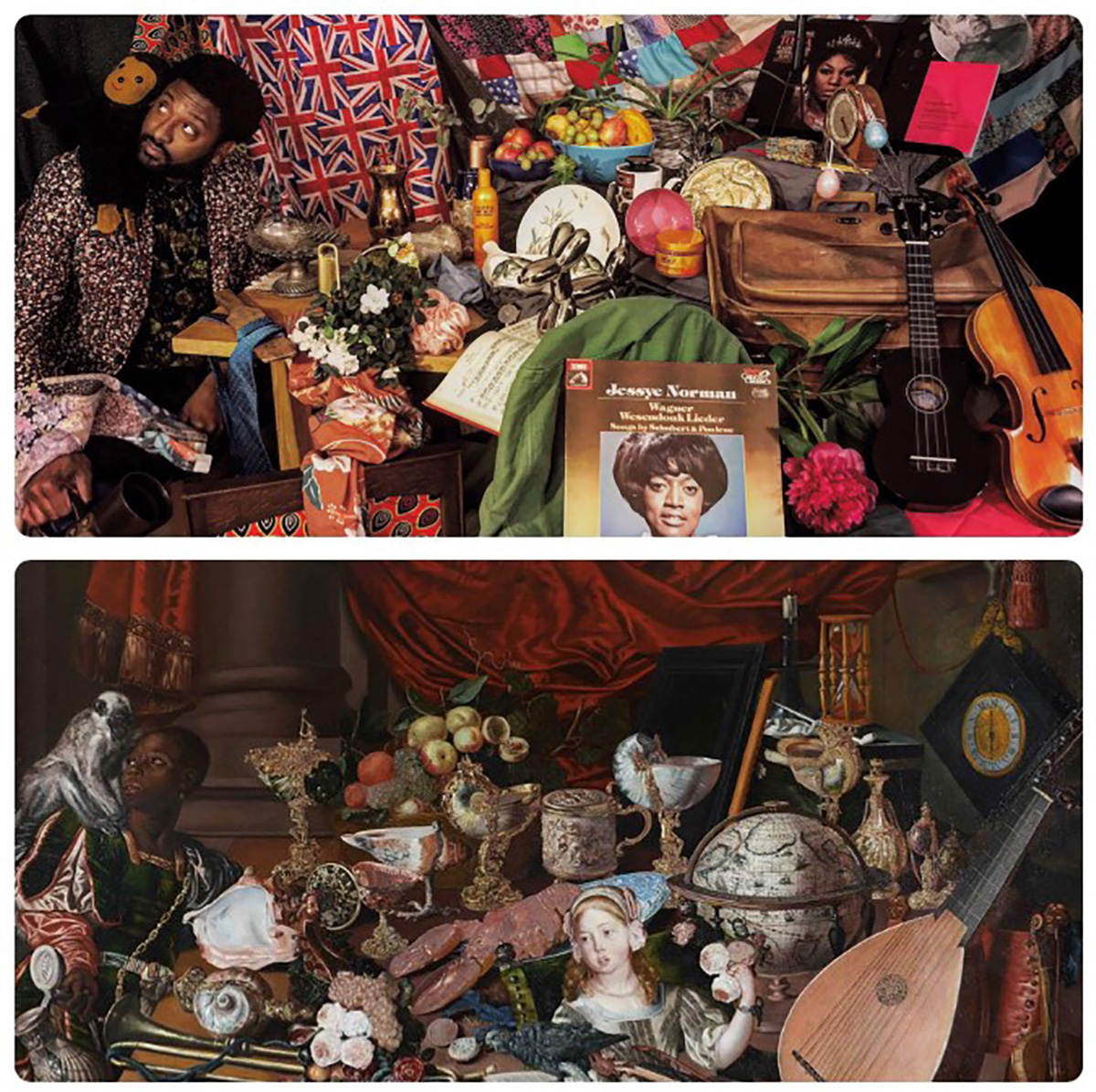 Tell us about the process of putting together a recreation.

With each recreation I like to maintain the same level of symbolism and intent as the original portrait. The process is closely aligned with my work in opera, where it is about making sure there is intention behind what I sing. I need to know what I’m singing about, what I’m trying to say, and who I’m saying it to. In many ways this project goes hand-in-hand with the work I do as a performer. Mainly because I'm using a lot of the same thought processes. So much of being a musician is about researching the background and history of your characters – you concentrate on storytelling. It’s important to start a dialogue with your audience that is meaningful, therefore I approach each recreation as if it’s a little performance.

Could you take us through your NPG recreation of Ira Aldridge? What drew you to this sitter?

I was drawn to Ira Aldridge because he is an iconic figure, a real trailblazer. He was an African American who came to the UK at the age of 17 to act on the London stage, at a time when the city was the cradle of pro-slavery lobbying in the UK. The Royal Manchester Institution commissioned this portrait shortly after Aldridge’s acclaimed performances at Manchester’s Theatre Royal, possibly to honour the city’s anti-slavery stance. As a Mancunian, I feel proud to know the work was commissioned in my hometown.

I chose to recreate the portrait with West African printed wax fabric. I had read that Aldridge fabricated a story that he descended from Senegalese royalty to aid his career, so it felt like a fitting way to comment on the complexities of identity. Although he was often billed as a curiosity, his intelligent professional choices, and acting capabilities gave him a platform to challenge his audiences’ expectations – he was both a brilliant performer and effective activist. 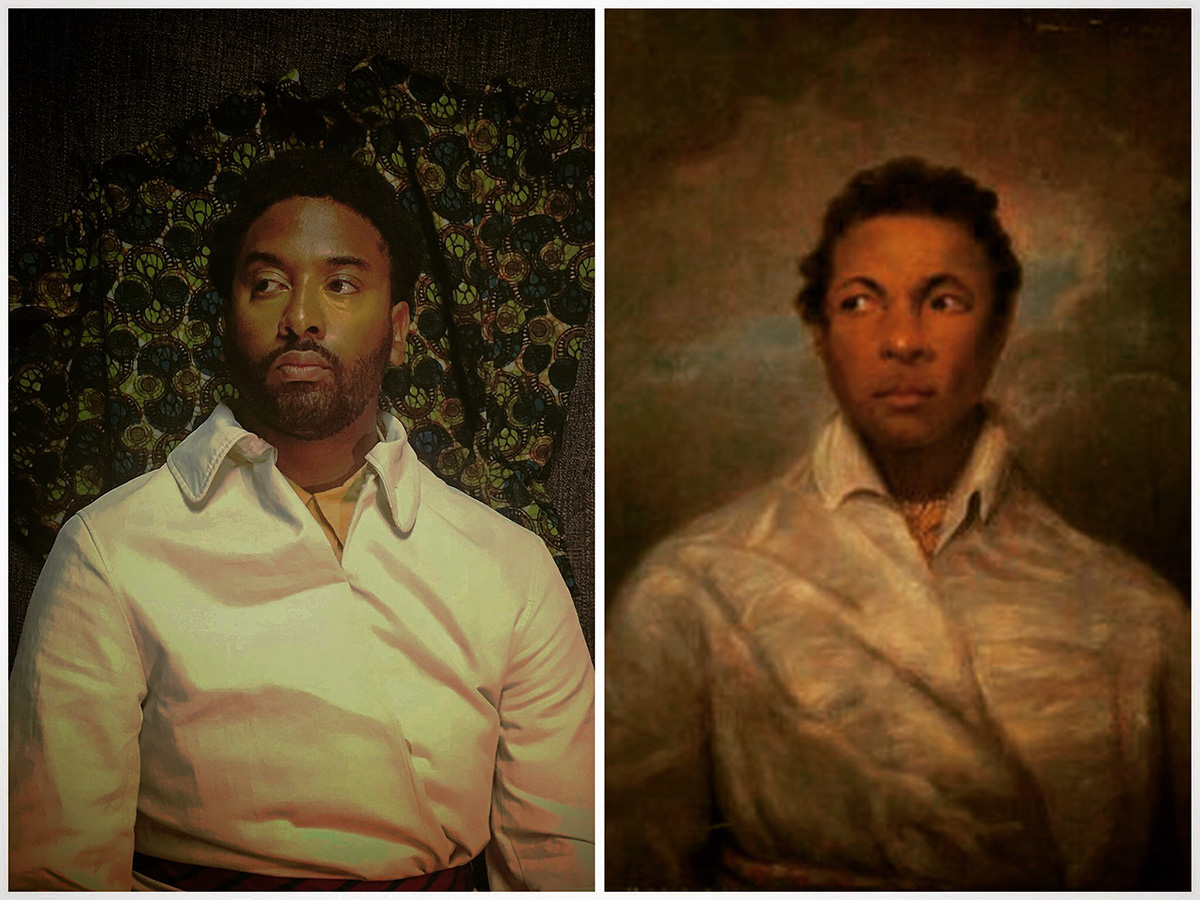 Ira Aldridge after James Northcote, circa 1826 Private Collection; on loan to the National Portrait Gallery, London

I have a project in the pipeline with BBC Radio 3 for Black History Month 2020. Also, check out some of my re-creations in Off the Walls: Inspired Re-Creations of Iconic Artworks, publishing this autumn. Getty Publications will donate all profits from sales of the book to charity.

I'm just adding this to the last module of my Contemporary Art History class for the term. So relevant in oh so many ways! Thank you.

This is amazing! I am doing an MRes on Black British in Eighteenth Century so I am thrilled that there is light being brought to this forgotten era!

I think this is great.

Wondrous creative mind at work! Complex and fascinating. Would live to see more. Thank you
Patricia