Restoration of the sculpture of Piero Capponi 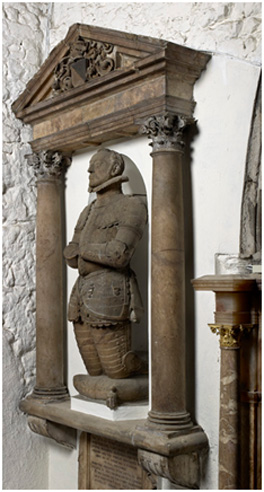 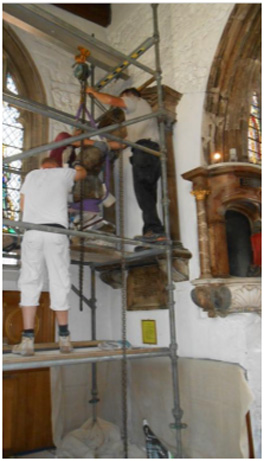 The 400-year-old alabaster effigy of Florentine merchant Piero Capponi (fig.1) who died of the plague in 1582 is on display in The National Portrait Gallery‘s exhibition Elizabeth I and Her People (10 October - 5 January 2014). The kneeling alabaster figure in full Elizabethan armour is a fine example of monumental carving that survived in a church almost demolished during WWII bombing raids in 1941. 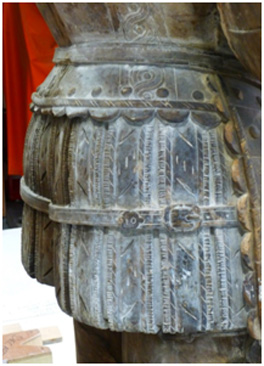 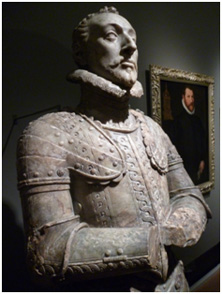 This munificent loan by St Olave’s Church in Hart Street has been the subject of an extensive conservation campaign at Cliveden Conservation, generously funded by the Henry Moore Foundation and The Portrait Trust.  Layers of grime and pollution have been removed from the surface, and open joints and old repairs have been restored using modern methods and retouched to match the alabaster.  Intriguingly there is no evidence that the surface was ever painted, as much alabaster was, but conservators say that instead the figure appears to have been highly polished at some time.

Removing the effigy was a challenge (fig.2) but once in the studio it became immediately apparent that the exceptional carving had been designed to be seen in the round (fig.3).  Indeed, John Strype's 1720 'Survey of the Cities of London and Westminster', records Capponi ‘kneeling’ upon his tomb of ‘fair Alabaster’.  By the nineteenth century, doubtless due to pressures of space, Capponi’s monument had been placed upon a wall (fig.1), necessitating the cutting of his legs and removal of his (possibly already lost) sword.

Following the exhibition the sculpture will be returned to St Olave’s and the surrounding aedicule, or setting, conserved.

Take your chance to look him in the eye while you can!

Images from top to bottom

1. The monument to Piero Capponi in the Church of St Olaves’s, Hart Street, London
2. Taking the sculpture down
3. Detail of the right side and rear, prior to conservation
4. Installed in Elizabeth I and Her People