Hover over the image below with the mouse to see a digital enhancement of how the miniature may have appeared to its first audiences. 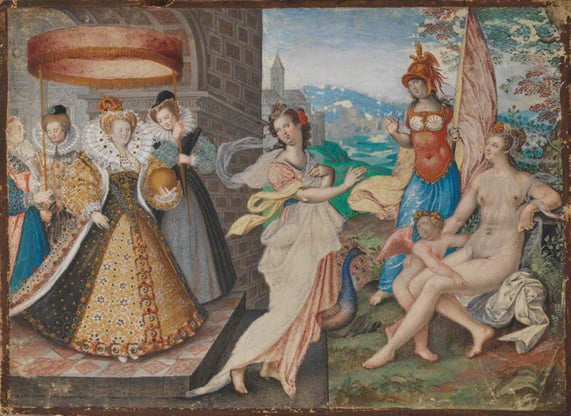 Whether to leave an object ‘as found’, or to try and restore it to something approaching its original appearance, is a predicament often faced by curators in consultation with conservators.  This was the conundrum we met in considering the treatment of an exquisite and previously unknown cabinet miniature of Elizabeth I and the Three Goddesses, recently acquired by the Gallery.  When we first saw the miniature last year prior to its purchase we were enchanted by the artist’s skill in depicting a fascinating subject, Elizabeth I triumphing over the goddesses of wisdom (Athena/Minerva), love (Aphrodite/Venus) and marriage (Hera/Juno).

Like all objects that have survived for over 400 years, this small object has suffered with age.  The paint layers themselves have faded in places and, although largely intact, there are some areas of loss.  This is particularly evident in the sky and hills in the background and in the goddess Minerva’s skirt (detail to right).  The picture is painted on vellum (fine animal skin) stuck down onto pasteboard, which is made from sheets of paper stuck together. Some of these sheets have started to separate from each other and from the vellum.

A conservator has begun the process of treating this fragile work. One question we asked ourselves was whether or not we should try to restore this picture to its original appearance and touch in the losses in the background? The first principle of modern conservation is that any changes or additions are reversible. However, it was clear that any application of pigment to the surface of this impressive art work could not be easily removed.  Where such additions have been applied to pictures they often also age at a different rate, causing changes to the appearance over time.  This option was therefore ruled out, and the miniature will be conserved rather than restored. Instead, we have produced a digital enhancement (see above) of how the miniature may have appeared to its first audiences: in particular the areas of loss in the detail, and the original silvery effect of the queen’s skirt.  Do let us know what you think.  You can see this miniature in a month’s time, when it will be on display for the first time as part of Elizabeth I and Her People (10 October 2013 – 5 January 2014).