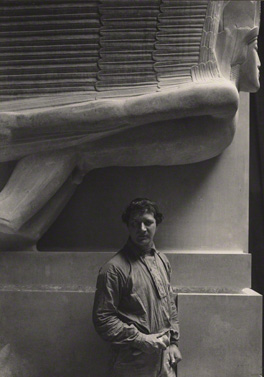 It’s hard to believe it now, but for the first decades of his career, Jacob Epstein was the sculptor some people loved to hate.  The genitals of the angel that he carved on the tomb of Oscar Wilde caused such a row that the sculpture was covered up with a tarpaulin while the naked woman in Rima, his memorial to W. H. Hudson, was attacked with green paint.  As the sculptor Henry Moore said at Epstein’s funeral, Epstein ‘took the brickbats for modern art’.  Epstein’s portrait busts didn’t provoke the same levels of outrage but I was surprised to learn that they were viewed with suspicion by many early critics.  What was it about these lively sculptures that led one critic to compare them to a ‘mud-pie’?

It was only when I viewed the thirteen busts in our Collection for the display Jacob Epstein: Portrait Sculptor that I began to understand why they felt so shocking – and so exciting – for some of their first viewers.  Observation was an important part of Epstein’s approach to portraiture and he could achieve surprisingly delicate, life-like effects: I particularly love the bristles of Ramsay Macdonald’s moustache.  But he wasn’t trying to reproduce the sitter’s features with forensic accuracy - as he put it, ‘a mathematically correct rendering of a person would neither be a work of art nor a likeness’. Instead, Epstein developed the busts away from strict realism to create expressive portraits. 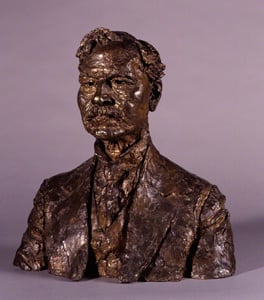 Epstein’s interest in the portrait as a distinct object, rather than simply a reproduction of the sitter’s appearance, brings us back to the ‘mud-pie’.  He was fascinated by the materials he used and deliberately exposed the marks left by his tools in the clay. Clare Sheridan, who sat to him in 1918, recalled how ‘Epstein at work was a being transformed ... his stooping and bending, his leaping back, poised, then rushing forward, his trick of passing clay from one hand to the other over the top of his head while he scrutinised his work from all angles, was the equivalent of a dance’.  For me, the rough surfaces of the busts reveal Epstein’s delight in his materials and their fluid, creative potential. He not only shows us what he can do, but also reveals how he did it.  The results are truly extraordinary.

As part of the display Jacob Epstein: Portrait Sculptor


Image Credits (from top to bottom)

The Gallery also has a fabulous selection of photographs showing Epstein at work actively engaged with sitters in the sculptor's studio - favourites of mine are those of Somerset Maugham, Bertrand Russell and Anna Neagle. Do look at these images online or better still after a visit to the display use the magnify feature on the Portrait Explorer in the Digital Space. Here you can really look round Epstein's studio, with its Greek Ionic columns and other sculptures he was at work on when the photographs were taken.