Should We Remember The Fifth Of November? 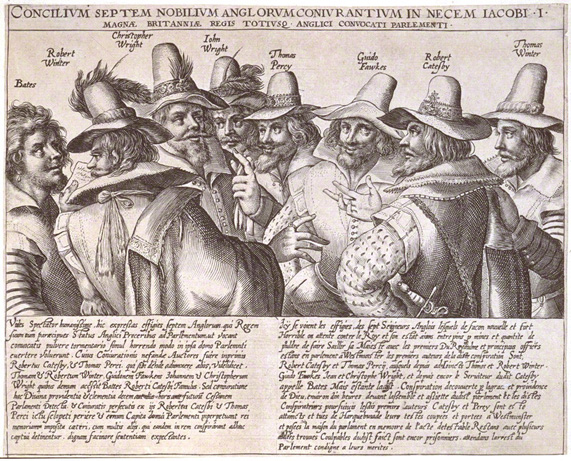 The Gunpowder Plot Conspirators, 1605  by Crispijn de Passe the Elder engraving, circa 1605

The festivities of Halloween and Guy Fawkes Night give this time of year a distinctly macabre feel. Children dressed as ghouls and the spectacle of the Guy being thrown on to the bonfire are surreal interruptions to the normal routines of our lives. But this year, the sense of disquiet that they may evoke has become a regular feature of my work.  This is because I have been researching the dark underbelly of seventeenth-century history for the Room 16 print display Treason, Plots & Murder.

Most of the plots that are explored in the display were flashpoints in the ongoing sectarian conflict between Catholics and Protestants that has been a feature of so much British history since Henry VIII broke with the Church of Rome in the 1530s. The Gunpowder Plot is of course the archetypal episode in this conflict; and the fifth of November (if not necessarily the year 1605) is the one date from British history that everyone can remember. The seriousness of the atrocity that Guy Fawkes and his co-conspirators planned to commit can hardly be overestimated. If the plan had not been exposed there can be little doubt that the king, his heir and most of the legislature would have been killed in the rubble of Parliament. 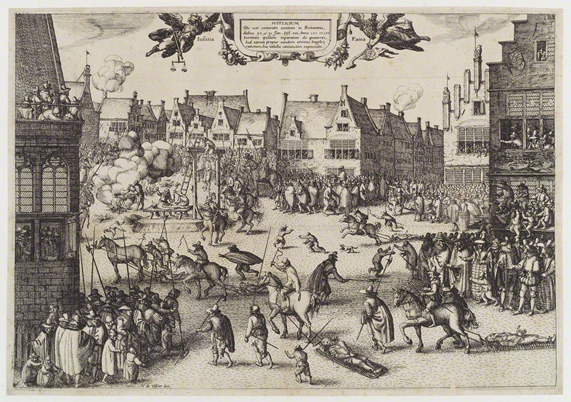 'The Execution of the Conspirators in the Gunpowder Plot' by Claes Jansz Visscher, 1606.

However, it is difficult not to be moved by the brutal death meted out to Guy Fawkes and those of his comrades who had the misfortune of surviving the shoot-out with government forces at Holbeach House, Staffordshire on the morning of 8 November. The Dutch print shown above could not be included in the display because it is bound in a book. Like the famous print of the plotters, shown in a suitably conspiratorial grouping, the print recording their execution is fictitious (as indicated by the decidedly Dutch setting). Yet, the baying crowds and the agony of being drawn through the streets, hanged until almost dead, then disembowelled and cut into four pieces is convincingly evoked. Such a print makes me wonder whether the Gunpowder Plotters, who were punished in such an extreme manner for their crime, deserve now to rest in peace?

I enjoyed your meditation and for the first time considered the discomfort of being dragged over cobbled, filthy streets to Tyburn, no doubt being jeered by the population as they contemplated what was about to happen. Yuck. But I would argue that the "Gunpowder Plot is of course the archetypal episode in this conflict".

I think I'd give that moniker to the Popish Plot 80 years later. Many more died equally painful deaths.

Thank you for informing me about the Gaelic festival of Samhain. Someone of my heritage should no doubt have been aware of it. I’m more than happy with the idea of lighting a fire to mark the turning of the seasons but I don’t think we can discount the fact that bonfires have been lit on 5 November annually since 1605 to celebrate the Protestant state’s deliverance from a Catholic plot. I agree that customs which help bring about shared experience and encourage community feeling are a good thing. Time for a Samhain revival!

But Bonfire Night isn't really about Guy Fawkes, like Halloween it's just a post-pagan version of Samhain. Even in an urban world, those annual rituals are still important. I think it's probably healthier to be coming together as a community around a bonfire than it is to encourage children to blackmail strangers in their own homes, but that's just me.