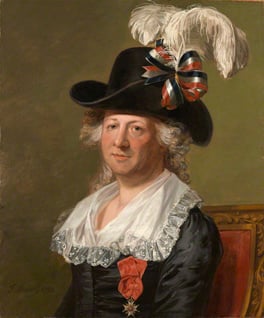 What does it mean to be a hero? Working for a gallery that celebrates individual achievement means that we often come across surprising life stories. For me, however, few are as inspiring as that of the Chevalier D’Eon and it was exciting to work on the acquisition of his portrait for the Collection. In the eighteenth century, homosexuality was punishable by death, there was no understanding of transsexuality and men who dressed in women’s clothing were viciously persecuted. Yet despite such oppression, D’Eon managed to forge two very successful careers: firstly as a man, working as a soldier, diplomat and spy, and then as a woman.

D’Eon’s extraordinary story sparked a debate over the display of the portrait: which pronoun to use? The answer ought to be whichever pronoun D’Eon preferred but here we hit the great problem of working with historical objects – the limitations of surviving evidence. While living as a man, D’Eon had bought women’s clothes for himself but he only began living exclusively as a woman due to external pressure. The French court, convinced by persistent rumours about D’Eon’s gender, only agreed to give him a pension if he wore ‘clothing appropriate to her sex’. This ruling reflects the strict eighteenth-century gender division: ultimately, D’Eon had to choose. He took the pension and lived the rest of his life as a woman, forging a very successful career in Britain as a female fencer.

We simply don’t know whether D’Eon would have chosen to be transvestite, transsexual or something else entirely if those options had been available. We didn’t want to repeat the mistake of the French king, in not realising that a man could choose to wear a dress, so we decided to use the male pronoun. However, D’Eon’s true gender identity remains an intriguing puzzle. Fortunately, this debate over the limitations of language doesn’t detract from his real achievements. In a period of oppression, D’Eon managed to come out on top. His courage in finding a way to be himself, despite the restrictions of his day, makes him a truly inspiring figure to have in the Collection.

He is just a fascinating person! I just found this Picture online, annother portrait of Chevalier D Eon painted in the 1780s by Reynolds! I was wondering if anyone knows more about it? Apperantly its in a private Collection?
http://www.granger.com/results.asp?image=0031723&itemw=4&itemf=0002&itemstep=1&itemx=4

A very fascinating story.Thank you for the information,it's so important to learn about history of these famous people.
Helen McAllister.

Wonderful article on D'Eon's life. Any chance of featuring other cross gender and cross dressing subjects such as Grayson Perry, Marilyn (Peter Robinson) or April Ashley in a future display?

D'Eon is a true inspiration for courage regardless of gender.
D'Eon is a hero !!!
(And for those who will split hairs...a 'heroine'.)

A fascinating post about an extraordinary subject - it's wonderful that D'Eon is now in the NPG, and very good to have this account of how the gallery approached the questions the portrait raises about gender identity.

Thank you for your comment. Cornbury is indeed a fascinating figure who highlights another problem in historical sources – how to sort out fact from gossip, in a world when reputation was everything and the mere rumour that a man wore women’s clothing would cause a public scandal. As Patricia Bonomi argues, we have even less evidence for Cornbury’s gender identity than for D’Eon’s – we don’t even know if he actually dressed in women’s clothes or if his enemies just told people he did. Another historical mystery!

Fascinating stuff, though he is by no means alone in being a well-to-do 18th century transvestite. Lord Cornbury, the governor of the New York colony before the Revolution was also the subject of scandal and controversy for doing much the same. Like D'Eon, a portrait exists of Cornbury in women's clothes and he has been the subject of a splendid modern biography by Patricia Bonomi.