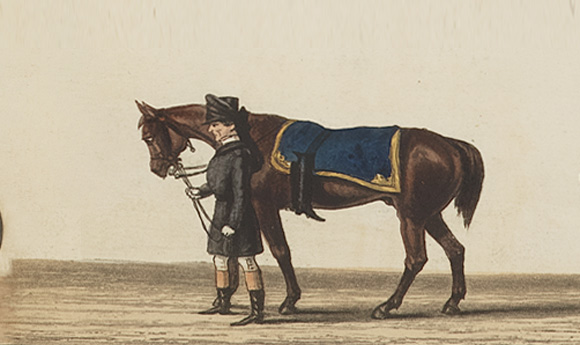 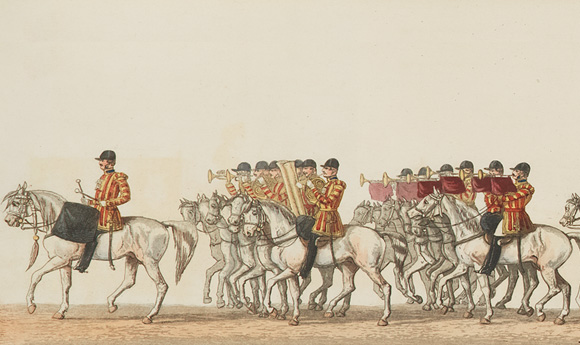 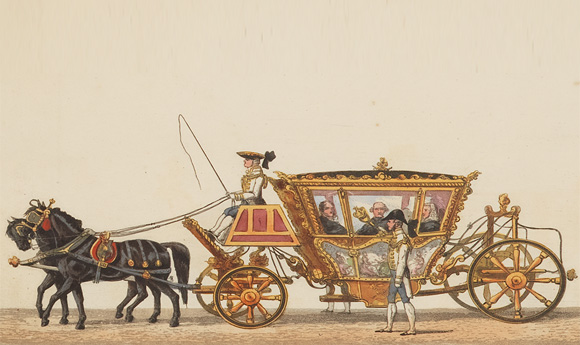 At just over 5 inches high, but around 67 feet in length, the printed panorama of the 1st Duke of Wellington’s funeral procession is unusually proportioned.  It must be this extraordinary size, combined with the charming quality of the figures, which has long made it a favourite of colleagues in the National Portrait Gallery’s Archive & Library.  It has always been frustrating not to be able to show this remarkable object to its best advantage however.  Unlike many other examples, whose owners have cut them into suitable lengths for display, our panorama is still intact and at its original length.

The Gallery’s recent exhibition, Wellington: Triumphs, Politics and Passions, provided the opportunity to display part of the panorama.  A clever arrangement of folds, combined with expert acrylic work by a Gallery technician, enabled us to show over nine feet, under the largest sheet of Perspex our designer could source.  However, on the 200th anniversary of the Duke of Wellington’s greatest achievement, his victory at the battle of Waterloo, we plan on unfolding the panorama to its full length on a series of tables in our Victorian Statesmen’s Gallery.

The panorama records one of the largest public events of its time.  With numbers swelled both by reports of Wellington’s death in newspapers and easier access to the capital via steam railways, the crowd watching the procession to St Paul’s Cathedral was estimated and one and a half million.  The size of the event is echoed in the size of the panorama, published as a souvenir in 1853, the year after the funeral.  The opportunity to see the panorama at its full length has caused quite a buzz within the Gallery.  In fact we wonder whether this has ever been done before:  how many other owners of the print can have had a room large enough?

An iPad App with a downloadable interactive version of the panorama is available from the App Store for £1.49. Search ‘Wellington funeral’.

Dear David,
I'm afraid we don't know how many of copies of the panorama were produced. Certainly many still survive. We know of others in public collections and the publicity for the exhibition has resulted in a number of private owners contacting us. The panorama would have been bought at the time by people wanting a souvenir of the funeral. Many publishers and manufacturers produced commemorative items and the publisher of the panorama, Ackermann, issued a number of other prints illustrating the event. The original price of 2 guineas (£2.10) was more than the weekly wage of most working people, so the target market must have been the professional classes and above.
Best wishes
Paul

Do you know how many prints of the panorama were produced, and who would have bought them?