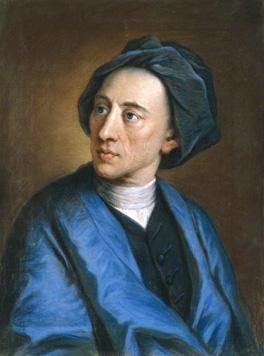 How much control do we have over our images? When we view a portrait, do we expect it to depict someone as they are or as they’d like to be? Would you feel differently if it was a portrait of you? These questions struck me when I was looking at William Hoare’s portrait of Alexander Pope for our new display, The Art of Drawing: Portraits from the collection, 1670-1850.

The leading poet of his day and an unsparing critic, Pope made many enemies amongst his fellow writers. He suffered from curvature of the spine, probably caused by Pott’s disease (a form of tuberculosis) and his critics mocked his physical appearance.  It is perhaps understandable, given these personal attacks, that Pope was worried about sitting for his portrait. William Hoare’s son, Prince Hoare, told the diarist Joseph Farrington how ‘when Pope sat to His Father for a Portrait, he showed anxiety to conceal the deformity of his person, & had a cloak thrown over his shoulders, & when Mr. Hoare was painting that part of the picture He came behind Him & said “He need not be very particular about the Shoulders”.’ 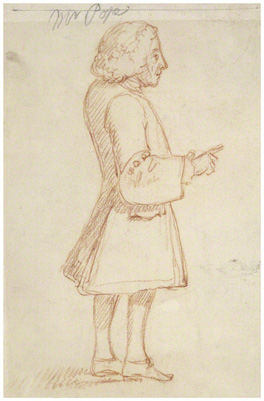 Pope tried to control his public image but his efforts were not entirely successful.  Artists, like the modern paparazzi, often sketched sitters in unguarded moments and Hoare made another image, not included in this display, which showed Pope’s true appearance.  An inscription on the back of this sketch, again by Prince Hoare, tells how, ‘This is the only Portrait that was ever drawn of Mr Pope at Full-length.  It was done without his knowledge, as he was deeply engaged in conversation ... Pope would never have forgiven the Painter had he known it.’

For me, these two images bring home the exciting diversity of drawing in this period.  Drawings could match the formality of oil paintings, as in Hoare’s first portrait of Pope, but could also be experimental, intimate and immediate. Together, such works give us a richer understanding of what artists were doing and how they saw the world around them.

Image Credit (from top to bottom)

Thank you for your interesting comment. I find it poignant, given Pope's attention to detail, how folds of the cloak seems to accentuate the slope of his shoulders. It's a telling reminder that even a concerned sitter couldn't foresee or control every detail of their appearance.

The spinal deformity is caused by the diseased vertebrae collapsing in a manner similar to that found in elderly women with osteo-porosis. On a lateral x-ray the affected vertebrae would look wedge -shaped rather than the healthy square blocks of normal vertebrae.
Maybe Richard II had the same problem?
In the first portrait Pope also appears to have very sloping shoulders, but maybe that is artistic licence!