The First World War through a woman's lens: Olive Edis and Madame Yevonde

This has been a year of significant anniversaries: 11 November 2018 marks the centenary of the end of the First World War and on 6 February this year Britain celebrated 100 years since the Representation of the People Act granted some women the right to vote. The coming-together of these two anniversaries offers an opportunity to reflect on the part played by two professional women photographers in the First World War: Madame Yevonde and Olive Edis, whose high-profile work is held in the National Portrait Gallery’s collection. With 2018 being the much-vaunted ‘Year of the Woman’, by now you’ve probably read many tales of inspiring, trailblazing women whom history has overlooked, and following the Armistice Centenary there will be plenty of stories of women in wartime that rightly celebrate their heroism and courage in the face of adversity. I’d like to take a slightly different approach in this post, however, and look at how Yevonde’s and Edis’ photographic practice presents a different account of war, one preoccupied less with the heroism of war than with what remains, who’s left behind, and who does the work of cleaning up afterwards. 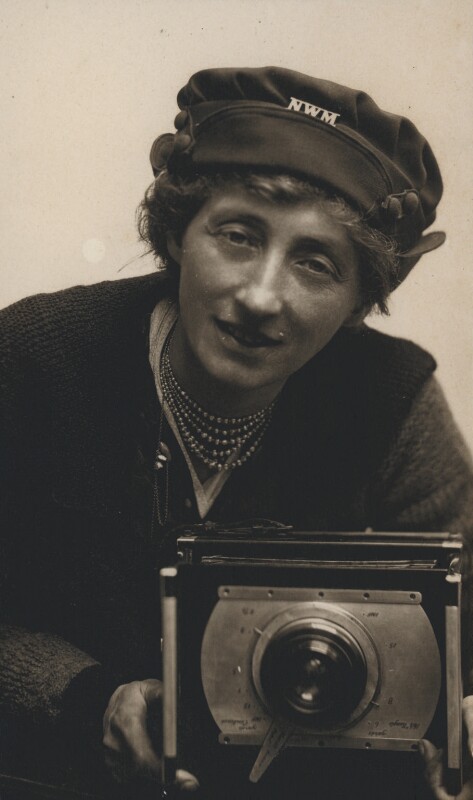 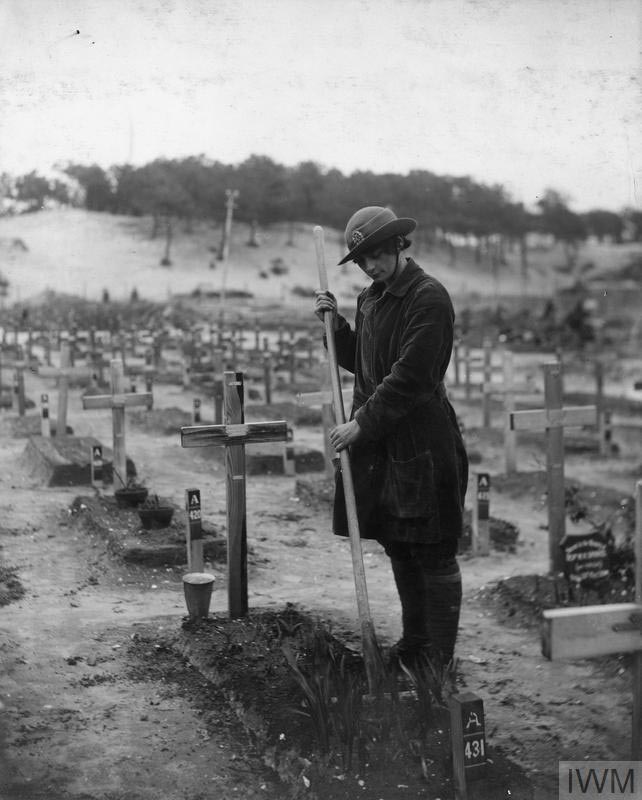 Fig.2 The grave of Betty Stevenson is tended to by a member of the Women's Army Auxiliary Corps (WAAC) in a graveyard at Etaples, France by Olive Edis, 1919 © Imperial War Museum (Q 8028) https://www.iwm.org.uk/collections/item/object/205214324

Olive Edis (1876 – 1955) [Fig. 1] was one of the most successful portraitists of her day. Starting out in 1905 photographing fishermen with her sister in their Norfolk studio, over the course of Edis’s career suffragettes, authors, politicians and even royalty sat in front of her camera. During the First World War Edis was commissioned by the National (now Imperial) War Museum to photograph the British women’s services in France and Flanders, but permission was only granted for her to enter the warzone four months after the Armistice in March 1919. The documentary photographs that Edis produced of women at work obliquely speak of the devastating impact of war on human lives and the natural environment. We see these women, impeccable in their uniforms, looking responsible, industrious, stoic, not stopping to mourn for there was work to be done. In the pictures they tend to graves [Fig. 2], engage in reconstruction work and nurse the sick. There are tender, more informal images too, reflecting moments of ordinary-ness amidst the chaos of recovery: a hair salon, a canteen, a woman on a farm cradling a rabbit. Life goes on. A photograph of the graves of nurses is a rare image in Edis’s series not to feature people and presents, with more literal gravity, the elegiac tone of all these photographs. Edis couldn’t make conventional portraits of women who lost their lives to the war, but in this photograph she asks us to remember them. 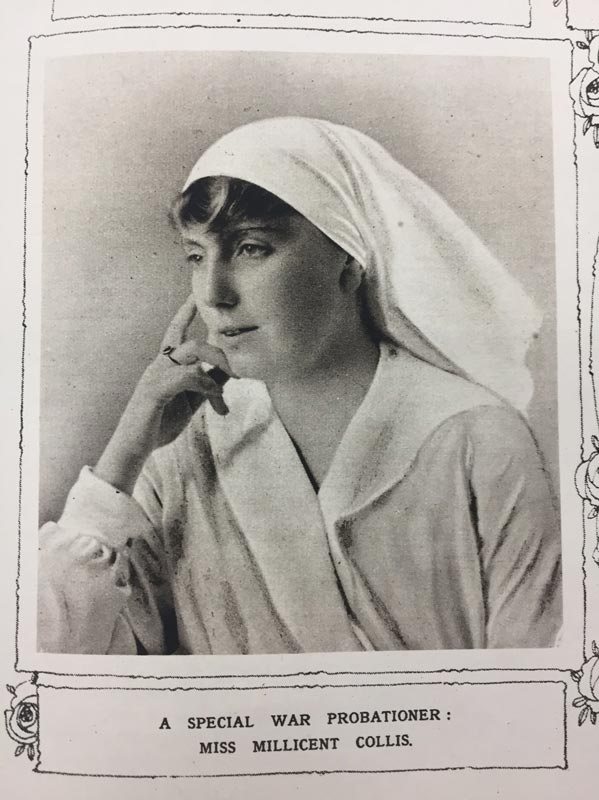 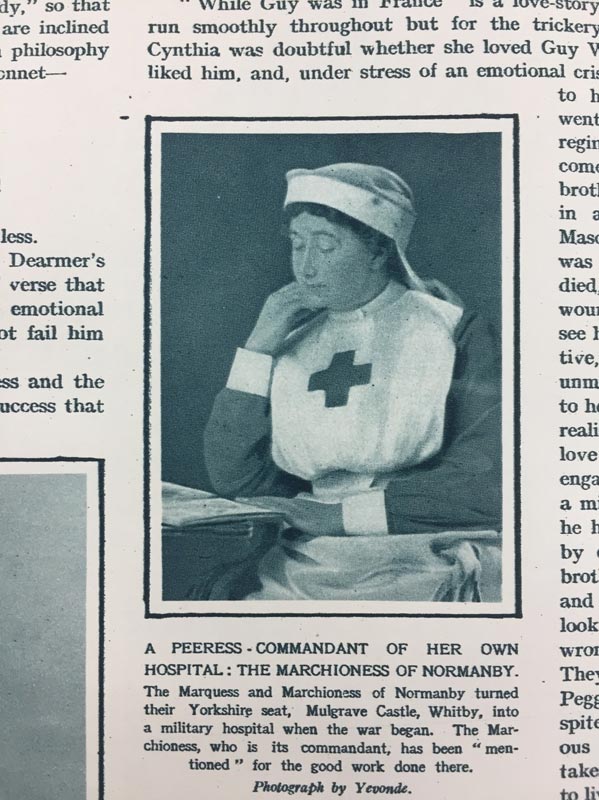 Portraiture took on a sombre responsibility in wartime as commercial studios filled with soldiers and aid workers headed to the Western Front, many of whom would not return. The London studio of a 21-year-old Madame Yevonde (1893 – 1975) had only been operating for a few months when Britain went to war in August 1914. Throughout the war Yevonde’s portraits of celebrity ‘workers in war-time’ [Figs. 3 and 4] were reproduced in the pages of high-society weekly The Sketch. This glossy magazine context somewhat glamourizes Yevonde’s wartime portraits, but her 1940 autobiography In Camera reveals the harrowing domestic and personal impact of conflict through the lens of her photographic practice. Yevonde recalls an RAF officer who looked barely eighteen coming with his mother to select proofs from his studio session: ‘No, Mother, please don’t choose that one,’ he protested, ‘I look there as if I were dead’. Later, when he died of wounds sustained in battle, his grieving mother wrote to Yevonde to tell her how much that portrait meant to her. In another uncanny and devastating incident, Yevonde describes the accidental double exposure of a plate, which produced a spectral portrait of a young woman who was killed shortly afterwards on a boat torpedoed by German planes.

One day in late 1915 Yevonde was mounting a series of portraits of a soldier with a ‘gentle, sensitive face, not at all the fighting type’, who had just recently gone to the Front, and at that moment she resolved to join the war effort. She made her arrangements, left her studio in the hands of an assistant and set to work as a land girl.

As we remember the end of the First World War, our media saturated with wartime images of death and glory, perhaps we should take a cue from Edis and Yevonde and take a moment to reflect on the photographs, and people, that are absent: the photographs that are not collected by national museums, that didn’t make it into the history books or the newspapers of the day. What many such collections of photographs leave out are the treasured portraits of ordinary people made in commercial studios—private and personal images that were displayed in homes, carried in wallets and worn in lockets; talismans for the safe return of one who is loved.

These finds show a wholly different, and personal, side to well-documented events. It's all too easy to get lost in the travesties and devastating statistics whilst forgetting to stop and consider how the war upheaved and altered irreconcilably all lives in all manner of ways. A perfect read for rememberance. Fantastic work!

The human endeavor, in all its forms, should be documented if possible . Photography poignantly emphasizes our shared humanity . Wonderful work .

Salt of the earth woman unsung. My Nan received a telegram on Armistice Day when all around were ecstatic that the war was over. With jubilant bells ringing and relief all round she with seven children would go on to be informed that my Grandad was dead. Thank you George for uncovering those photographs of ordinary woman coping in extraordinary circumstances and just getting on with it. seems to be our lot.