Our preparations for the special display ‘The Real Tudors: Kings and Queens Rediscovered’ continue apace. The painstaking conservation work on three portraits is nearing completion, new frames have been made and new display cabinets are being prepared for the arrival of some precious and particularly important loans. The show opens on 12 September and runs until 1 March 2015 and is being staged in Rooms 1-3 where our permanent Tudor collection usually hangs. The display showcases recent research on portraits of the Tudor monarchs, which was undertaken as part of the Making Art in Tudor Britain project, and will include multiple portraits of Henry VII, Henry VIII, Edward VI, Mary I and Elizabeth I. 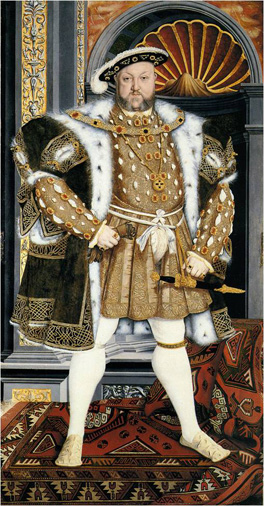 It occurs to me that the prospect of seeing six Henry VIII’s all together in one room may be rather daunting and I hope our visitors don’t end up feeling overwhelmed, as close up he is an imposing and rather brutish figure. However, the interesting thing about encountering portraits of the same monarch that were produced over several decades is how artists seem to get better at fashioning the visual identity of the ruler to create a truly memorable icon. The early portraits of Henry VIII, for example, show an elegantly dressed man with a wide face and small sharp eyes, but it is the portrait created by the German artist Hans Holbein the Younger that provides a brilliant visual essay in the presentation of royal power - here is a Henry both terrifying and impressive, a monarch who is easily a match for any rivals and enemies across Europe. Not surprisingly, it was an image that became well known and was copied again and again. We look forward to seeing what Holbein’s full-scale drawing or ‘cartoon’ made for the Whitehall mural (since destroyed) will look like alongside one of these early copies kindly on loan to us from the National Trust (above). 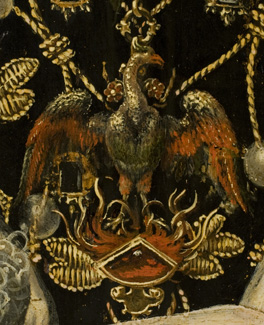 It is also evident that powerful and compelling portraits do not usually emerge fully formed; artists build on the work of their predecessors. Portraits of Elizabeth I tell the same story. It wasn’t until the mid-1570s (around 15 years into her reign) that patrons and the artists they employed, began to create portraits with complex inventive symbolism. These portraits reflected on her virginity and unique nature as an unmarried ruling queen, such as the ‘Phoenix’ portrait of c.1575 (detail of the Phoenix left).

Working alongside conservators, scientists, curators and art historians over the last seven years, we have learnt an enormous amount about individual portraits, and also about techniques and artistic practice of this period.  This display and the accompanying fully-illustrated book written by Charlotte Bolland and Tarnya Cooper will present part of the research and is available online here

More information - including new technical and art historical analysis on many portraits in our collection and case studies on portraits of Edward VI and Elizabeth I - is available on the research project pages on the Gallery website: www.npg.org.uk/matb

Image credits from top to bottom

Detail of the Phoenix jewel from a portrait of Elizabeth I (NPG 190) © National Portrait Gallery, London

Thank you for your comment. During the technical analysis of the portrait as part of the ‘Making Art in Tudor Britain’ project we found no evidence of any signature. However, the background, which imitates silk damask, does have an interesting texture with thicker paint used for the lighter areas. You can take a closer look at the portrait using the comparative image viewer on the online project database: http://www.npg.org.uk/collections/search/portraitConservation/mw03081/King-Henry-VIII

Hello... Regarding the portrait of Henry VIII by an unknown Anglo-Netherlandish artist, ca 1520 - is it possible this is by Paris Bordone? There seems to be a very faint attribution/signature top left that looks awfully like his name.