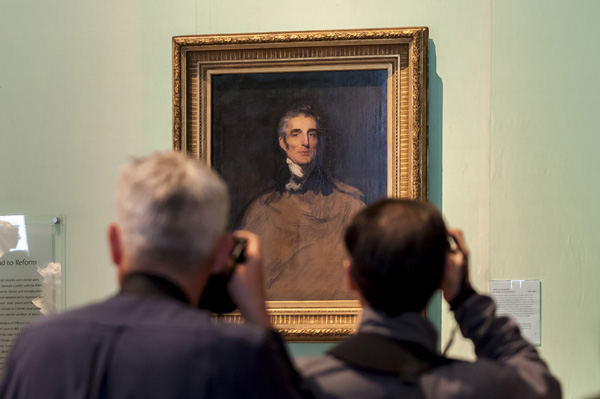 We are delighted to announce that the Gallery has successfully acquired Sir Thomas Lawrence’s final portrait of Arthur Wellesley, 1st Duke of Wellington, following a public fundraising appeal.

Offered to the Gallery for £1.3 million, the Wellington Appeal has been completed with a grant of £200,000 from the G and K Boyes Charitable Trust and £180,000 from the National Heritage Memorial Fund, having been kick started by a donation of £350,000 from Art Fund in September 2016. This generous support was in addition to the Gallery’s own funds, and donations from more than 500 supporters through a public appeal. Donations were received from throughout the UK and overseas.

The painting is an important acquisition for the Gallery, which has no other significant portrait of the Duke of Wellington in its Collection, an omission of one of the most iconic and popular figures in British history. The Gallery has been seeking to secure such a portrait since it opened in 1856.

Started in 1829, the unfinished portrait shows Wellington in civilian dress with only his black collar and white stock visible. It was commissioned by Sarah, Countess of Jersey - a leading political hostess and supporter of the Tories - at the height of Wellington’s political career, when he was Prime Minister and closely involved in the legislation around Catholic emancipation and deeply opposed to the reform of the House of Commons. Earlier in the decade he had been involved in the delicate negotiations between the Prince Regent and the Prince’s estranged wife, Queen Caroline. He also represented British interests at the Congress of Verona in 1822, one of a series of conferences on European affairs after the Napoleonic Wars.

At Lawrence’s death in 1830 the portrait remained unfinished. But unlike many other clients, Lady Jersey refused to have it finished by a studio assistant. On hearing that the Duke of Wellington had fallen from power in 1830, Lady Jersey burst into tears in public. She reportedly ‘moved heaven and earth’ against the Reform Act 1832 which Wellington had also opposed.

Dan Snow, historian, broadcaster and co-author of The Battle of Waterloo Experience, says: ‘Wellington is a titanic figure in British history. Our only Field Marshal Prime Minister, a man of genius on and off the battlefield. This arresting portrait must sit in the national collection, and now following an outpouring of generosity, it will do. The artist has captured the Duke’s legendary demeanour. Among his many contributions to British life he forged the masculine culture of unbending froideur in the face of adversity. It is as special as a work of art as it is as a primary source.’

Thank you to everyone who made this acquisition possible by donating to the Wellington Appeal. The portrait can be seen on display in Room 20.

I think it is a splendid addition to the portrait collection and a fine impression of Wellington in later life completing as it were a fuller impression of the man..