We caught up with the artist Todd Gray to talk about the artwork he created for Michael Jackson: On the Wall, and his time spent with Michael Jackson as the singer's official photographer. 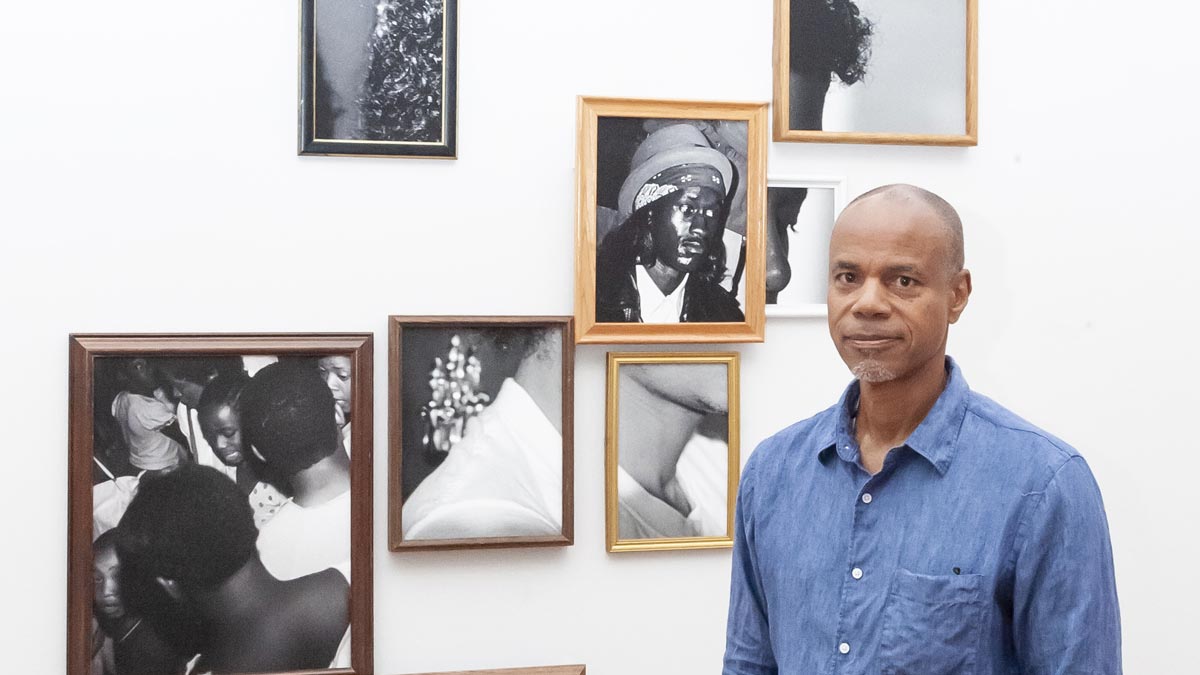 When and where did you first hear Jackson’s music and how did you react?

I remember being picked up from high school and jumping into my friends when I first heard "ABC" and was grooving to it immediately.

When I learned the group was my age I was floored and later on, inspired. Five black teens making it on the radio was a real life success story and signalled to me that the sky is the limit. I became emboldened in my dreams and did not limit the future that I imagined in my mind.

How did you become one of Jackson’s official photographers and how did you work together?

I began working closely with Michael Jackson in 1979. I was hired to photograph Michael at Disneyland while he performed on a television special. Michael was an enigma, I’d never met anyone like him before in my life. He had the persona of a twelve year old. When the television production took a lunch break Michael wanted me to go on the rides with him and told me to leave my camera behind. I got in touch with my inner twelve year old, screaming and laughing with him as we plummeted through the Matterhorn roller coaster ride and Pirates of the Caribbean. I was not star struck and gave him plenty of quiet space. After the Disneyland job he instructed management to hire me exclusively when he needed a photographer. Perhaps my quiet nature and ability to tune into my inner-child while hanging out with him played a large part in his decision to choose me. He told management, “I like Todd, he doesn’t talk much.”

Michael was very sensitive to the overt racism of the American press, well aware that a caption can completely alter the context of a photograph, perpetuating negative stereotypes. He scrutinized every photograph I made and only the images he approved were released to the press. Early on Michael told me he wanted to be as loved and as famous as Mickey Mouse. Off stage images emphasizing his childlike innocence and playful nature were key. Years later Michael instructed me to concentrate on his eyes, and capture a more mature image while revealing his most vulnerable moments.

Michael and I would sit together and pour over photography books celebrating the golden age of Hollywood, iconic portraits of film stars from the 1930/40’s, at Jane Fonda and Katherine Hepburn’s suggestion. He especially admired the photography of George Hurrell while I was a champion of Horst P. Horst. I would emphasize the sensual lighting in these photographs, while Michael would disagree and tell me the eyes were the most significant element of the image. We also looked at the work of the 19th century photographer Lewis Hine’s images of children slaving away in New York textile factories, their eyes lost and vacant. He was very touched by these images. In Atlanta I told Michael we would have a natural light photo session during the golden hour, an hour before sunset, when the light is magical. Michael told me to concentrate on his eyes. We worked quietly together, capturing glimpses of both his inner-life and the immense psycho/emotional burden resting on his shoulders.

How have you used your archive of images from that time to make new works more recently?

I use my archive to reference the past while composing a narrative about the present. Photography is a time machine. It freezes a millisecond of time allowing us to examine and ponder it. I use my archive of photographs made in Ghana to talk about my history as both an American and African Diaspora. I use my photographs of Michael Jackson to signify a variety of narratives depending on the individual artwork. He is the most recognized man on the planet and a product of American and African culture. Ideally my works speak about the experiences of being a minority in a culture dominated by the values of Western patriarchy.

Cape Coast and Nickel 2014 and your other works in the On the Wall exhibition do not show Michael's face – why is that?

Everyone seems to have their own image of Michael in their head depending on the stage of his career they were first introduced to him. MJ Thriller looks different than MJ Bad. MJ Bad (1987) looks different from Blood on the Dance Floor (1997), etc. By obscuring his face I allow each viewer to project their own Michal Jackson onto the work. I also cover the face to allow viewers to read the body of not only Michael, but also the body of a black man, encouraging a plurality of readings or references. 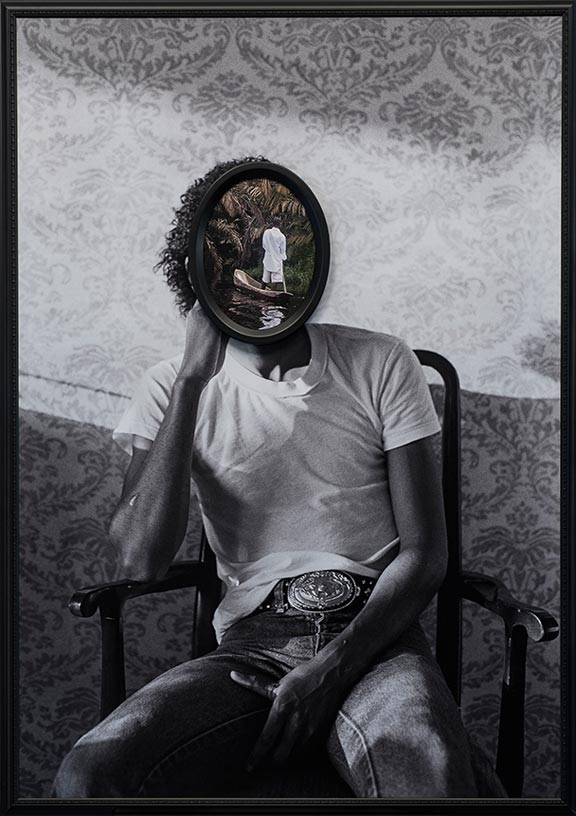 You were recently at the Gallery opening of the exhibition – were their particular works from the Gallery collection or On the Wall exhibition that caught your eye?

The short answer would be Kehinde Wiley's painting and Rodney McMillan's photo/text piece -- hi ho, hi ho. Candice Beritz video installation was mesmerizing as was the video of Michael’s floating eyes taken from the trial.

For the edition Cosmic Jacket, could you tell us what inspired this work?

The red leather jacket from Beat It is as iconic as my photograph of Michael's dance shoes on point. The leather becomes a second skin and invites the eye into the photograph to feel its texture. The image of the cosmos is positioned to where his head would be and gestures towards the idea of the infinite. The pairing of these two images speaks volumes about Michael’s persona and creative legacy.

Cosmic Jacket by Todd Gray, a limited edition print made exclusively for the Michael Jackson: On the Wall exhibition, is available in store and from our online shop.

Michael Jackson: On the Wall was on until 21 October 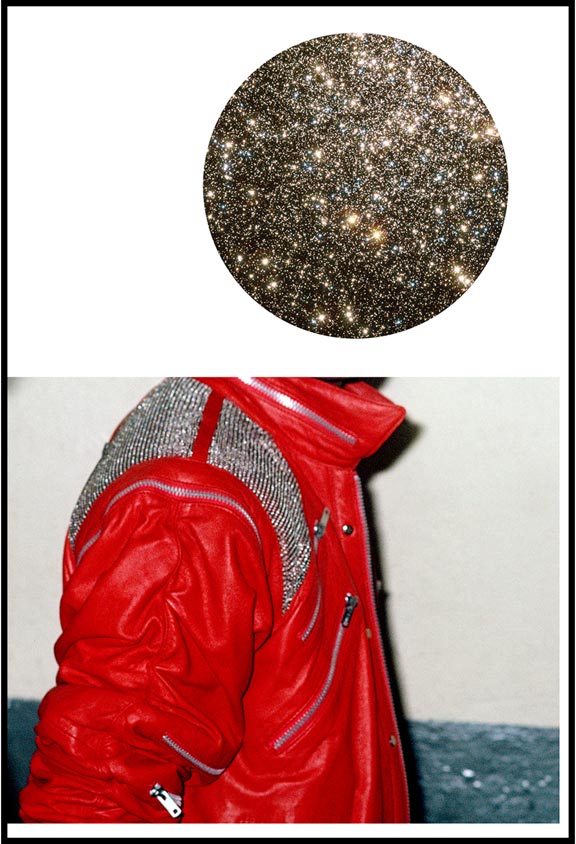 Thank you for that

Thank you portrait gallery for recognizing Michael as a seminal artist of the 20th. century