Vivien Leigh: A Star in Wartime 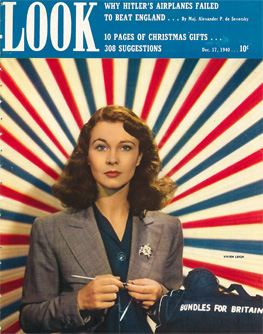 One of my favourite items on display in Starring Vivien Leigh: A Centenary Celebration is the eye-catching issue of LOOK magazine from 17 December 1940. Earl Theisen’s striking cover photograph of Leigh posing stoically against a loud red, white, and blue background whilst knitting for Bundles for Britain highlights one of several interesting ways the actress used her fame to contribute to the British war effort.

Leigh was in California in September 1939 when Prime Minister Neville Chamberlain announced that England was at war with Germany. She had signed a typical seven-year film contract with Selznick International Pictures in exchange for the coveted role of Scarlett O’Hara in Gone With the Wind, but these new political complications threw any plans of contractual fulfilment into disarray.  Fiercely patriotic, Leigh, along with her fiancé Laurence Olivier, wanted to return to London as soon as possible. However, they were advised by Minister of Information Duff Cooper that British actors in Hollywood would be of more use by staying put for the time being.

Leigh’s first unofficial wartime assignment was the 1940 tearjerker Waterloo Bridge, for which she was loaned to Hollywood’s most powerful studio, Metro-Goldwyn-Mayer. The following year she appeared in a more overtly patriotic film: Alexander Korda’s Lady Hamilton, a propagandist biopic in which she played Emma Hamilton to Olivier’s Horatio Nelson. In her spare time she took part in several ensemble radio broadcasts, performing dramatic readings from famous works, including Noel Coward’s ‘Cavalcade’. She also appeared at Red Cross charity events in New York where she and Olivier ended an unsuccessful production of Romeo and Juliet, and knitted clothing for British soldiers as part of the Bundles for Britain initiative headed by Natalie Wales Latham. 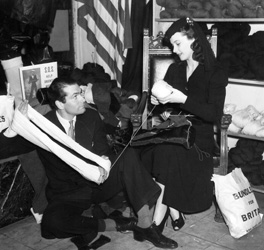 Returning to London with Olivier in January 1941, Leigh continued to lend her presence to charitable causes like serving hot tea to soldiers at pop-up canteens and giving a speech at the christening of a B-17 Flying Fortress. Although her contract with Selznick and a lack of suitable roles prevented her from appearing in any of the critically acclaimed British films of the period, Leigh was still able to provide much-appreciated escapism for film and theatre-goers. Gone With the Wind opened in 1940 and became the longest-running film of the war (it screened at the Empire in Leicester Square for four consecutive years), and when she was cast as Jennifer Dubedat in a revival of George Bernard Shaw’s play The Doctor’s Dilemma, audiences flocked to the Theatre Royal Haymarket for the chance to see Scarlett O’Hara on stage. 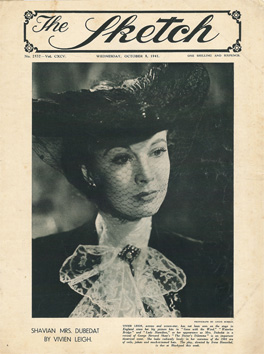 During the long run of The Doctor’s Dilemma, Leigh approached theatrical manager Hugh 'Binkie' Beaumont about doing other types of war work in her spare time. She suggested driving an ambulance or doing fire watch duty on the roof the theatre. Beaumont believed that Leigh’s most important job was bringing joy to people through acting, so he invited her to join the Old Vic Spring Party, organised by ENSA. Along with Beatrice Lillie, Dorothy Dickson, Nicholas Phipps, Kay Young and Leslie Henson, Leigh spent the summer of 1943 traversing the North African desert, performing for British and American troops.

Although Rommel’s Afrika Corps had been defeated by the time the Spring Party arrived, the tour was not without its share of exhaustion and danger. Leigh wrote home to Olivier often, at one point mentioning that their stage manager had been left behind in Algeria on suspicion of spying for the Nazis. 'Nothing seems to matter though,' she wrote in one letter from Tunis, 'because we are now really playing to the boys who deserve it & haven’t seen anything except fighting for months.' 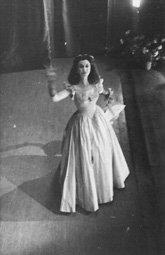 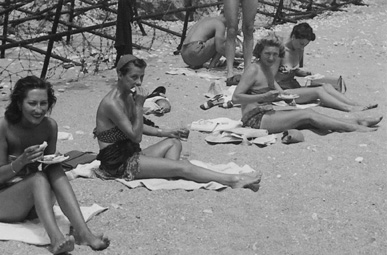 I find the two snapshots above, taken in Gibraltar, to be particularly interesting because they show that the actors managed to make time for fun and relaxation amidst the chaos. Leigh’s most popular performance during the tour was a burlesque called 'Scarlett O’Hara: The Terror of Tara,' which satirised her famous film performance.  In Tripoli, the Spring Party performed for King George VI, an experience Leigh cited as 'one of the most exiting' of her life. The monarch enjoyed Leigh’s performance and encouraged her to make an act of 'The White Cliffs of Dover', which he carried with him throughout the war. At the end of it all, the company adjourned to a swimming pool at a villa by the sea and celebrated with 'a jolly ripping gin. 'Starring Vivien Leigh: A Centenary Celebration contains works by famous photographers such as Angus McBean, Cecil Beaton, and Norman Parkinson, and also highlights Leigh’s most famous films and stage performances. However, I do hope visitors to room 33 also take a moment to look closer at the materials highlighting the interesting but lesser-known aspects of her life and work . I would also be interested to hear from anyone who saw Gone With the Wind in Wartime, or knows of any other photographs relating to the 1943 Old Vic Spring Party tour.

Image Credits (from Top to Bottom)

As part of the display - Starring Vivien Leigh: A Centenary Celebration

I didn't see GWTW during the war - too young- but my father told me once that he went to watch it in a movie theater in Astoria, Oregon, USA, and when he came out, the town sirens and church bells were sounding the danger alarm - Pearl Harbor had been bombed. Astoria is on the bank of the Columbia River right out by the mouth, and the Columbia is the passage for ships going to and from the big Naval yards in Portland Oregon.

All main West Coast costal communities were on high alert for invasion, espionage, or attack after Pearl Harbor, and while it was kept out of the news for national security (and morale) reasons, Seaside, Oregon (a few miles south) was mistaken for Astoria one grim night and was shelled by a Japanese submarine.

Thank you for your article.

Really enjoyed your book - a very balanced look at Vivien's life by someone who cared about their subject. The unseen photos were much appreciated.

Dear Leigh Fan,
Thank you so much for your comment. In regards to letters exchanged between Vivien and Lady Diana Cooper, I have not personally come across any. However, there may well be some correspondence from Cooper in the newly acquired Vivien Leigh papers at the V&A, which, until recently, was under lock and key by Leigh’s family. Another avenue that might be worth exploring is the Duff and Diana Cooper papers at Churchill College, Cambridge. Leigh was a great letter writer, and she admired Cooper very much, so it’s very possible that correspondence from her exists. There was also a book of Cooper’s letters published recently under the title ‘Darling Monster: The Letters of Lady Diana Cooper to her Son John Julius Norwich 1939-1952’ which I believe contains a few scattered mentions of Leigh.

Such an informative blog illuminating fascinating extra information on Vivien Leigh's war effort.
Interesting to see a mention of Minister of Information Alfred Duff Cooper (later Viscount Norwich)
who Leigh and Olivier visited in Paris at the British Embassy and Beaton memorably photographed with Duff Cooper's wife , the great beauty and socialite Lady Diana Cooper. Their lives and letters are well documented. Do you know if any Cooper to Leigh letters or diary entries survive?