We Looked Around We Saw Ourselves

It is only now that the Creative Connections display is open we can truly see what we have created.

When commissioned last summer to make a new piece of moving image work in collaboration with students from Brentside High School, my first job was to research sitters in the Collection with links to the borough of Ealing.

The criteria for having your portrait included in the Collection is that you must have made a notable contribution to British life and culture. Peter Crouch played for England; Steve McQueen is an Oscar winner; Spencer Perceval was a Prime Minister.

Yet, amongst the more obvious credentials it has been the lesser-known stories that I have enjoyed discovering: Ada Lovelace, Victorian computer pioneer and Ellen Wilkinson leader of the Jarrow March. Paul Canoville was the first black footballer to play for Chelsea in 1982 and an ex-student of Brentside High School, but his portrait was not owned by the Gallery.

Canoville experienced a great deal of racism both on and off the pitch and injury forced him in to early retirement. Having overcome some difficult times he has written an autobiography and now gives motivational talks to young people.

The National Portrait Gallery have made a special acquisition, and now Canoville's portrait hangs in the display, recognised for his notable contributions to Britain. 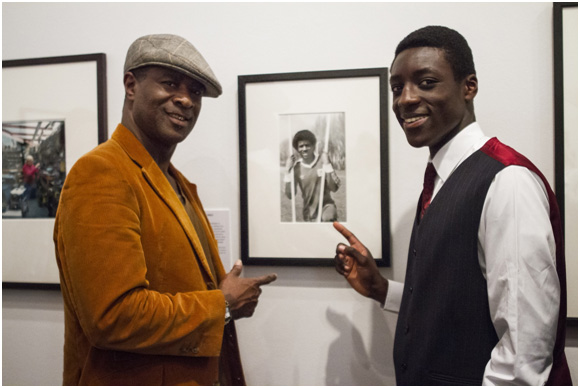 Throughout the project we spent a lot of time with the eighteen portraits currently hanging in room 37. To see them displayed together in one space is like walking in to a reunion of old friends - a rare gathering of the bold and the brave, all connected by one west London borough.

Through working together, myself, and some young people from Ealing have formed new relationships; created shared references and built a place from which to make new work. Now that work sits amongst the portraits from the Gallery’s Collection like an invited guest at the reunion party.

The experience has allowed us to see ourselves differently: reflected in the eyes of our collaborators, in the portraits of the sitters, in the place we have been exploring and ultimately in the work we have created.

As all civilisations have known, it is important to see ourselves reflected in the images we create. At the exhibition opening Paul Canoville was clearly moved to see his own image reflected back at him from the walls, and rightly so.

Through the project and the display we have created a different way of seeing ourselves. Now with an audience the work is complete. I hope it will inspire you to see yourself differently and think about who we are as a nation differently.

For not to see ourselves reflected in the environments we create induces fear, rejection and displacement:

When I looked around I saw and heard of none like me. Was I, then, a monster, a blot upon the earth, from which all men fled and whom all men disowned?