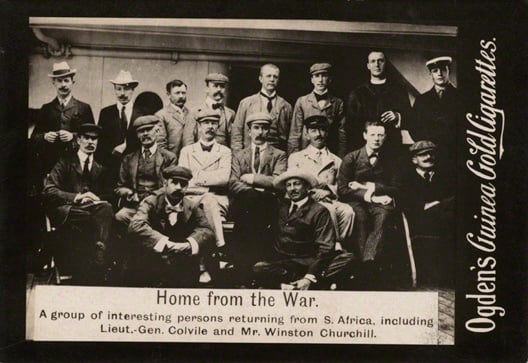 The British remember Sir Winston Churchill (1874-1965) as the steadfast leader of the nation through the testing times of the Second World War. He is perhaps less well-known for his other war hero credentials, earned many years before in South Africa. While researching for a display on the second Boer War, my attention was directed to a tiny cigarette card in the Photographs Collection. Cigarette cards were issued in series to be collected, and featured popular figures such as sportsmen, actors and military heroes. This card shows a group of mostly moustachioed men in hats, among whom sits, rather conspicuously, a serious, clean-shaven young chap with slicked-back hair in a pinstripe suit. This is Winston Churchill, aged twenty-six.  Below the image is an inscription: ‘Home from the War. A group of interesting persons returning from S.Africa, including Lieut.-Gen. Colvile and Mr. Winston Churchill.’

Why was Churchill one of only two of the seventeen ‘interesting persons’ in the group to be singled out for special mention? It might be news to some that between 1897 and 1900, Churchill fought in India, the Sudan and South Africa while doubling as a war correspondent, and published books on his adventures. One such book, London to Ladysmith (1900) describes how he was captured by Boer commandos, despite pleading ‘’I am a newspaper correspondent ... and you ought not to hold me prisoner.’’ His captor’s reply: ‘’Oh, we do not catch Lords’ sons every day.’’

In a lively anecdote, Churchill then details his great escape from prison: ‘I said to myself, ‘’Toujours de l’audace’’: put my hat on my head, strode into the middle of the garden ... without any attempt at concealment...after walking a hundred yards and hearing no challenge, I knew ... I was at large in Pretoria.’  A reward of £25 was offered for his capture ‘alive or dead’...but Churchill made it to British-held territories by wading through swamps and stowing away on trains whilst surviving on a chocolate bar.

His spirited account delighted audiences in Britain and as far away as the USA, and he was inundated with fan mail.  Then, six months after his arrest, Churchill returned to the front to continue his contract as a journalist for the Morning Post. I hope that you will take the time to visit the display in room 29, and take a closer look at our young, pin-striped war hero.