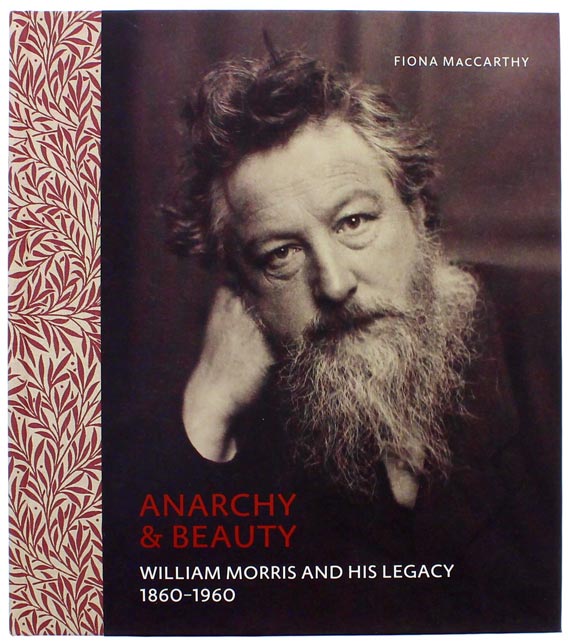 This book is about a man and the growth of an idea. The man is William Morris, great Victorian artist-craftsman, designer, poet, polymath and visionary thinker. The idea is his concept of art for the people, which inspired the nascent British socialist movement, influenced successive generations, and affects us still today.

‘Have nothing in your houses that you do not know to be useful, or believe to be beautiful.’ – William Morris

William Morris (1834–96) regarded beauty as a basic human birthright. In this fascinating book, which accompanies a major exhibition, Morris’s biographer Fiona MacCarthy looks at how his highly original and generous vision of a new form of society in which art could flourish has reverberated through the decades.

In 1860 Morris moved into the now famous Red House at Bexleyheath in Kent. Here
his ideas found practical expression in its decoration, undertaken with the help of his artist–craftsman friends Edward Burne-Jones, Ford Madox Brown and Dante Gabriel Rossetti, who envisaged the project as the first stage in a campaign against the debased artistic standards of the mid-Victorian age. From these beginnings, MacCarthy charts the development of a revolution: the setting-up of Morris’s shop (later Morris & Co.), his embracing of radical ideas of sexual freedom and libertarianism, and the publication of his visionary novel News from Nowhere (1890), in which he advanced his hopes for a dismantling of the stultifying structures of society and their replacement by a more equable and fluid way of life.

Later chapters explore how Morris’s ideas came to influence the Arts and Crafts movement in Britain, Europe and the USA, the Garden City movement, and numerous artists and craftspeople who sought to negotiate a viable place within the modern world in the troubled years that followed the First World War. Finally, MacCarthy explains the continuing relevance of Morris’s ideals, as expressed in the planning and execution of the Festival of Britain in 1951, a regenerative project of the post-war Labour government that inspired a number of young designers such as Terence Conran with a direct sense of mission to bring the highest design standards within the reach of everyone.

Fiona MacCarthy is a cultural historian, broadcaster and critic whose widely acclaimed biographies include studies of Eric Gill, William Morris (which won the Wolfson History Prize and the Writers’ Guild Non-Fiction Award), Stanley Spencer, Lord Byron and, most recently, Edward Burne-Jones. She is a Senior Fellow of the Royal College of Art and was awarded the OBE for services to literature in 2009.