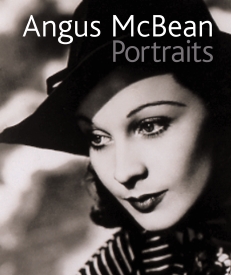 Selected and edited by Terence Pepper

Angus McBean (1904-90) was one of the most extraordinary British photographers of the twentieth century. In a career that spanned the start of the Second World War through the birth of the 'Swinging Sixties' to the 1980s, he became the most prominent theatre photographer of his generation and, along with Cecil Beaton, the last of the British avant-garde studio photographers.

During the 1930s and 1940s, McBean developed Surrealist techniques, including the depiction of the actress Dorothy Dickson as a water lily. Yet his style kept pace with the times and by the 1950s and 1960s he was taking photographs of celebrities from Cliff Richard to Shirley Bassey. Arguably his most famous image is of the Beatles, leaning over the balcony at their recording studios, which was used on the album cover Please Please Me. His celebrated series of self-portraits, which he sent out as Christmas cards, capture his witty and eccentric personality, while his numerous photographic commissions in the 1980s - including his work with the pop singer David Sylvian - demonstrate his inventiveness and creativity.

For the first time since his death in 1990, McBean's photographs of stars such as Vivien Leigh, Laurence Olivier, John Gielgud and Audrey Hepburn, and his colour prints from the 1960s of the Beatles, Maria Callas and Spike Milligan are to be brought together in a major retrospective exhibition, accompanied by this fascinating book. Terence Pepper's intriguing account of McBean's life and work includes extracts from the photographer's unpublished autobiography and is illustrated throughout with full-page colour and duotone reproductions.