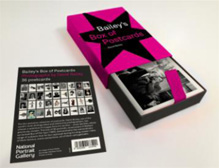 A collection of 36 postcards of portraits from across David Bailey’s career, including: actors, musicians, dancers, photographers, models, designers, artists and people encountered on his travels.

For this exclusive collection of postcards, David Bailey, one of the world’s most distinguished and distinctive photographers, has chosen a selection of images from his archive – some familiar, others previously unseen. This box of 36 portraits, reminiscent of Bailey’s acclaimed Box of Pin-Ups (1965), demonstrates the extraordinary range of people that he has captured during his long career; many of them famous, some anonymous, all of them unforgettable.