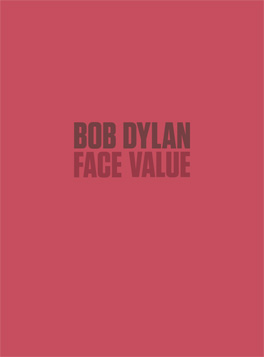 By Bob Dylan and John Elderfield

An intriguing collection of portraits by the internationally acclaimed icon of American music, Face Value accompanies a display of Bob Dylan’s previously unseen and unpublished pastels produced for the National Portrait Gallery, London.

‘I've done sketching most of my life. In notebooks, on napkins, on rough paper or cardboard, plates and coffee pots … basically when there's something to look at – so it's not new for me. As to exhibiting it …’ — Bob Dylan

Bob Dylan is one of America’s most influential and important cultural figures. With over 500 songs, 46 albums and an astonishing 110 million record sales to his name, Dylan, now in his early seventies, is turning increasingly to another mode of artistic expression; one that has occupied him throughout his life, but for which he is much less well known.

Although Dylan has sketched and drawn since childhood and painted since the late 1960s, only relatively recently has he begun to exhibit his artworks. The twelve works collected in this beautifully produced volume represent his latest foray into portraiture. In an illuminating essay and a rare interview with Bob Dylan, curator and art historian John Elderfield explores the story behind these works and Dylan’s approach to his art. Previously, Elderfield has acknowledged that while it may be unsettling when an artist does not adhere to the thing for which we have come to admire him most, Dylan has often asked his audience to get over the discomfort of his changing: ‘And don't speak too soon / For the wheel's still in spin …’ For Elderfield, Dylan’s paintings, like his songs, are ‘products of the same extraordinary, inventive imagination, the same mind and eye, by the same story-telling artist, for whom showing and telling – the temporal and the spatial, the verbal and the visual – are not easily separated.’

Bob Dylan’s book Drawn Blank, a collection of sketches, was published in 1994, and in 2007–8 a series of gouaches and watercolours based on it was exhibited at the Kunstsammlungen Chemnitz in Germany. The Brazil Series, exhibited in Copenhagen in 2010, was followed by The Asia Series at the Gagosian Gallery, Manhattan in 2011.


John Elderfield studied Fine Art at Leeds and the Courtauld Institute. He is Chief Curator Emeritus of Painting and Sculpture at the Museum of Modern Art in New York, where he has organised numerous exhibitions over the past thirty years, ranging from Manet and the Execution of Maximilian and Henri Matisse: Radical Invention, 1913–17, to major retrospectives devoted to Kurt Schwitters, Pierre Bonnard and Willem de Kooning. His books include The Language of the Body: Drawings by Pierre-Paul Prud'hon, and his essay ‘Across the Borderline’ was published in the catalogue for Dylan’s The Brazil Series.