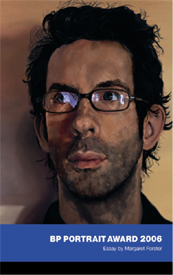 Forster is a biographer and novelist. Her novels include Diary of an Ordinary Woman (2003) and Is There Anything You Want? (2005). She is also the winner of the Heinemann Award for her biography of Elizabeth Barrett Browning, and was awarded both the Writers' Guild Award and the Fawcett Society Book Prize for her biography of Daphne du Maurier . Most recently she won the J.R. Ackerley Prize for Precious Lives (1998).

'One of Britain's most prestigious and lucrative art prizes' - The Guardian

The BP Portrait Award, now in its twenty-seventh year, is a popular fixture on the summer calendar, and is the leading showcase for young artists specialising in portraiture. The competition is open to artists from around the world and last year received a record-number of over 1000 entrants, all competing for the main prize of £25,000.

As well as featuring all the entries from this year's competition, this arresting book includes a fascinating essay by novelist and biographer Margaret Forster and an illustrated article by Joel Ely, the travel-award winner 2005. Ely has made portraits of members of a Basque male gastronomic society known as the Txoko, which meets weekly to consume traditional Basque dishes, drink, talk and sometimes sing. He explores how cooking is a means of communication and a way of defining cultural identity and authenticity.

Margaret Forster's essay focuses on how portraits have inspired her biographical writing, and shows how woman have been portrayed in portraiture over the centuries, culminating in a celebration of women's achievements.

Published to accompany the summer exhibition at the National Portrait Gallery, London, from 15 June to 17 September 2006, Aberdeen Art Gallery and Museum, from 25 November 2006 to 3 February 2007 and the Royal West of England Academy, Bristol, from 31 March to 20 May 2007.