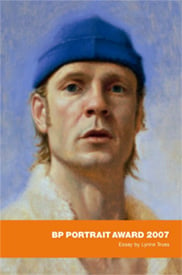 Lynne Truss is the author of the New York Times bestseller Talk to the Hand: The Utter Bloody Rudeness of the World Today, or Six Good Reasons to Stay Home and Bolt the Door and The Lynne Truss Treasury. Eats, Shoots & Leaves, for which she won Britain's Book of the Year Award, and which has sold more than three million copies worldwide. Truss is a regular host on BBC Radio 4, a Times (London) columnist, and the author of numerous radio comedy dramas. She lives in London and Brighton, England.

'One of Britain's most prestigious and lucrative art prizes'
The Guardian

The BP Portrait Award, now in its twenty-eighth year, is a popular fixture on the summer calendar, and is the leading showcase for artists specializing in portraiture. Last year 197,000 people visited the exhibition. This year, for the first time, the competition is open to all artists aged eighteen and over from around the world. The 2007 award received a record-number of entrants (1,870), all competing for the main prize of £25,000. There is also a new prize for artists aged between eighteen and thirty.

The catalogue features over sixty works from an international list of artists, which together display a diverse range of styles and painterly techniques, highlighting the vitality of portrait painting today. It also includes a witty and illuminating essay by popular writer and journalist Lynne Truss and an illustrated article by Toby Wiggins, the travel-award winner 2006. Toby Wiggins portrays the people who work the land in Dorset. His portraits show his respect and admiration for their skill and knowledge and his deep commitment to rural life, which is under threat.