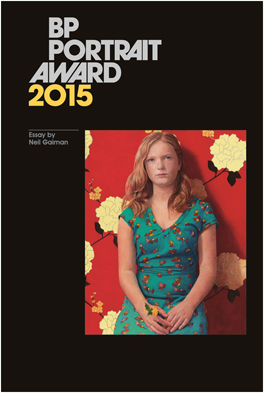 The BP Portrait Award, now in its thirty-sixth year, is one of Britain’s most prestigious art prizes, and is the leading showcase for artists throughout the world specialising in portraiture.

In 2014 more than 280,000 people visited the exhibition based on the competition open to all artists aged eighteen and over from around the world.

The catalogue features fifty-five works from an international list of artists, which together display a diverse range of styles and painterly techniques. It also includes an essay, an illustrated interview with the previous year’s Travel Award winner and interviews with the prizewinners by Richard McClure, which give further insight into the artists behind the portraits.

Neil Gaiman is a bestselling author of books for adults and children. He has won numerous awards and his books have been adapted for film, television, stage and radio. Some of his most notable titles include the novels The Graveyard Book (2008 – the first book ever to win both the Newbery and Carnegie medals), American Gods (2001) and the UK’s National Book Award 2013 Book of the Year, The Ocean at the End of the Lane (2013). Born in the UK, Neil now lives in the US with his wife, the musician and writer, Amanda Palmer.