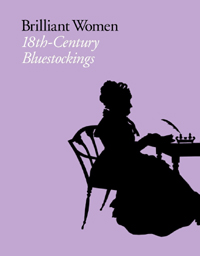 From Elizabeth Barrett Browning to Germaine Greer, influential women have lamented their lack of foremothers. But why has the remarkable group of creative and intellectual women who flourished in eighteenth-century Britain been overlooked? Publicly celebrated in their time, these women's achievements in the worlds of art, literature and even political thought came to symbolize the progress of a civilized and commercial nation.

This book introduces us to the 'Bluestocking' salon, where like-minded men and women met from the 1750s onwards to debate contemporary ideas and promote the life of the mind. The authors explore the identity of these brilliant bluestocking women and show how they used myth and tradition to strengthen their public image. For example, the allegory of the muses appealed to women, who saw the benefits of sociability, creative exchange and collaboration.

At the end of the eighteenth century, in the aftermath of the American and French Revolutions, the political climate changed, introducing new limits on female intellectual and personal liberties. The lives of three key figures illustrate the changing climate of opinion: the radical historian Catharine Macaulay (1731-91) and egalitarian author Mary Wollstonecraft (1759-97) fell from grace with charges of moral and sexual license, while the evangelical Hannah More (1745-1843) became the acceptable face of bluestocking culture. Once again, openly intelligent women were viewed with suspicion and 'bluestocking', so recently a mark of distinction, became a term of abuse and ridicule.

With portraits, prints, caricatures, personal artefacts and a fascinating narrative, the authors reveal the extraordinary vigour of the bluestockings and their culture.

Published to accompany an exhibition at the National Portrait Gallery, London from 13 March - 15 June 2008.

Elizabeth Eger teaches English Literature at King's College London. Her previous publications include critical editions of Elizabeth Montagu's Essay on Shakespeare and Maria Edgeworth's children's literature; and as co-editor, Women, Writing and the Public Sphere, 1700-1830 and Luxury in the Eighteenth Century: Debates, Desires and Delectable Goods. She is completing a book Living Muses: Women of Reason from Enlightenment to Romanticism.

Lucy Peltz is 18th Century Curator at the National Portrait Gallery, London. Her recent work includes curating the refurbishment of the Regency galleries and Making Faces ­ Eighteenth-Century Style, new permanent displays at Beningbrough Hall, North Yorkshire. She has published widely on antiquarianism, gender and portrait-print collecting, and is completing a book on extra-illustration and material culture in the eighteenth century.