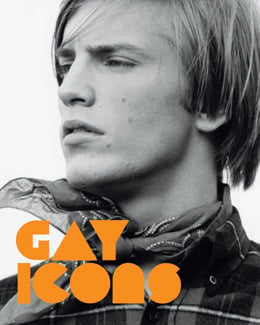 A long-overdue book to recognise the important role of gay icons, and their contribution to contemporary culture and society. The question of what it means to be a ‘gay icon’ is explored by ten high-profile figures. Each one has selected six powerful images of individuals who not only have significance for themselves, but also raise issues about gender identity, history and iconography for wider consideration.

Published to coincide with the fortieth anniversary of the Stonewall Riots in New York, as well as a major UK exhibition, this book explores gay iconography through the portraits of both historical and modern icons.

A gay icon is acknowledged to be a historical or public figure celebrated by many in the lesbian, gay, bisexual and transgender communities. The featured icons, all of whom have had a direct positive influence on the selectors’ own gay sensibilities, include: artists Francis Bacon and David Hockney; civil rights campaigner Harvey Milk; writers Daphne Du Maurier, Patricia Highsmith and Walt Whitman; composer Tchaikovsky; musicians Sir Elton John, k.d. lang and Village People; entertainers Ellen DeGeneres and Lily Savage; and much-loved icons Nelson Mandela and Diana, Princess of Wales.

An essential title for anyone interested in gender studies and politics

Richard Dyer is Professor of Film Studies at King’s College, London; his research interests are in issues of entertainment and representation. A regular contributor to Gay Left, he also organised the first gay cinema event at the National Film Theatre. Recent publications include Now You See It: Historical Studies in Gay Film and The Culture of Queens (Routledge).