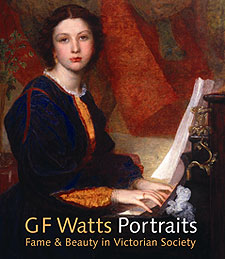 Barbara Bryant is an art historian and writer who specialises in the work of G.F. Watts. A major contributor to the exhibition The Age of Rossetti, Burne-Jones & Watts: Symbolism in Britain 1860-1910 at Tate Britain in 1997, she is the author of the forthcoming Oxford Dictionary of National Biography's entry on Watts, as well as other articles and essays on the artist and on eighteenth- and nineteenth-century British art.

Accompanied a major exhibition at the National Portrait Gallery from 14 October 2004 to 9 January 2005.

As one of the great portrait painters of the nineteenth century, George Frederic Watts (1817-1904) is best known for his 'Hall of Fame' series showing the noted contemporaries of his day. This series forms the cornerstone of the National Portrait Gallery's collection in London, but the wider importance of Watts's portraiture has never been fully appreciated since many works are in private collections and some have never been published. Timed to coincide with the centenary of his death, this book is the first major study of this aspect of Watts's work and provides a unique opportunity to see many of the artist's grand full-lengths, often strikingly beautiful and most hardly known, as well as the wide range of his portraits, from society beauties to eminent Victorians, dating from the 1840s to the end of the century.

Watts was one of the celebrities of Victorian London, counting Tennyson, Ruskin, the Pre-Raphaelite artists and pioneer photographer Julia Margaret Cameron among his friends. Much interviewed and honoured, he fostered his own renown and participated in the creation of a considerable international reputation. Such a modern notion of the artist's public image is familiar to us today, but Watts forged this role for himself in the interest of promoting his serious and high-minded art, which crucially included his portraiture.

This handsome catalogue illustrates and describes over sixty works by Watts, some seen for the first time. The Poet Laureate Andrew Motion gives a fascinating account of his experience of the artist's work in the introduction and Barbara Bryant's text offers a wider view, exploring Watts's entire career through his portraiture. The book presents new perspectives on Watts as an innovative artist aware of the traditions in portraiture yet also keenly alert to new artistic developments like Pre-Raphaelitism and Symbolism.